Buying clothes for someone else has to be one of the riskiest decisions to make this festive season. Not only do you have a proverbial minefield of sizing and color issues to deal with, but, as most Japan residents have probably twigged, there are no returns given for unwanted gifts. For that reason, I recommend accessories or jewelry for that special fashionista.

On the other side of the equation, if you’re given a gift that doesn’t quite fit either your body or your taste, Tokyo is on your side. Popular second-hand fashion chains such as Rinkan, for high brands, and Mode Off, for anything mid-market, all the way down to Uniqlo, will give you a fair price for that regrettably unwanted gift. 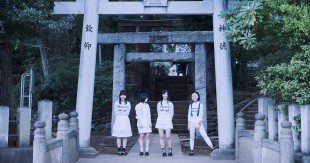 The worlds of fashion and idol culture seem to be on an inescapable collision course. Not only has Japan released its first idol fashion magazine Overture this year in October; Maison Book Girl has launched a fashion-brand-meets-idol-group concept, the likes of which hasn’t been seen in Japan—or anywhere else, for that matter.

The idol group functions as models and muses for the fashion line: They inspire and then wear the clothes the brand produces. The concept, which comes from talent agency and music producer Ekoms, who put the band together from ex-members of idol group BiS, as well as auditioned members, is an odd mix to say the least. Not only is the fashion itself significantly more conservative than the standard idol fare, it’s also aimed squarely at the group’s female fan-base rather than the male fans one might have associated with the subculture only five years ago. But maybe that’s the point? Idol groups and their fans are changing, and the industry is starting to reflect that. 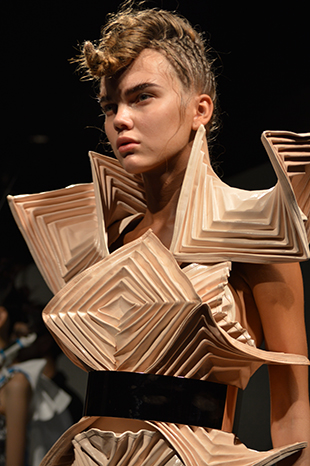 Toast of the Tokyo underground, Garter from designer Koshiro Ebata, has finally come down to earth with a collection that even fashion civilians might be able to wear. The experimental designer has defined the avant-garde street fashion scene from the moment he opened his boutique in the Koenji hub of cool, the Kitakore Building, in 2009—and has been dressing everyone from domestic starlets Kyary Pamyu Pamyu, AKB48 and Ayumi Hamasaki, to international heavyweights Nicki Minaj and Lady Gaga, ever since.

Now, with his collections winning him fans worldwide and his first full international exhibition at Italy’s Milano Salone under his belt, the designer has given in and produced a series of accessible accessories and basics—even the humble T-shirt—but without compromising his very lofty fashion ambitions. Fans of his craft need not worry though. Ebata has still produced a number of conceptual pieces for the collection, this time inspired by the traditional Japanese craft of origami, all rendered in molded leather. The couture-level dresses might be well outside the sartorial and fiscal limits of most, but they can be rented for events if you ever want to play Gaga for the night.