Ryan Kennedy’s Horsebeach has been causing waves in the British indie music scene for a few years now. Hailing from Manchester, a city with a rich musical legacy, Kennedy has launched a Kickstarter campaign to help fund the band’s fourth album which will be recorded in Tokyo. Metropolis met with Kennedy in Tokyo’s Nakano district to discuss Horsebeach, Tokyo and what it’s like to be an upcoming musician in the 21st century. 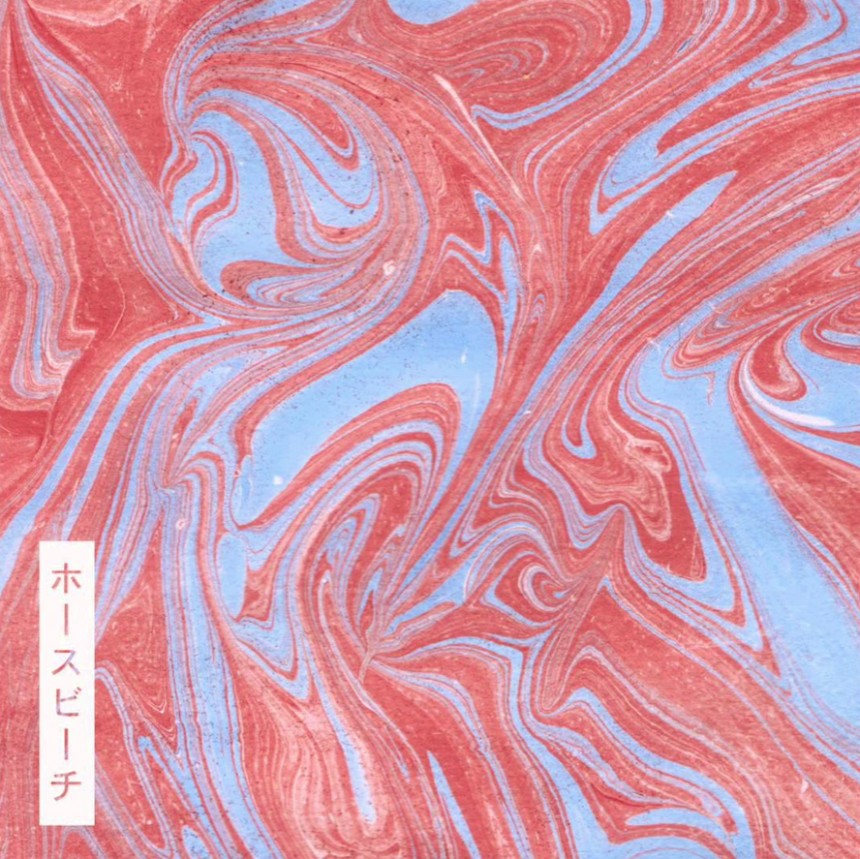 Metropolis: How did Horsebeach begin? What’s the story behind the band?

Ryan Kennedy: Making music is something I had been doing for a while before [Horsebeach]. Just fiddling around a bit and mainly making electronic music. When I was about 21 or 22 (2011 maybe) I started writing band-based stuff by myself in my room at home. I was never planning to release any music—just a personal thing. I showed some of the music to my friends and they said you should play this live. One of the friends happened to be a drummer and I said why don’t you play drums? And then we got a lot of close friends to join in.

M: The Smiths, another Manchester band, famously started writing and creating music in their bedrooms. I wonder how being from Manchester has had an effect on your music?

RK: Music and image actually. It’s definitely had an effect on the music. I grew up listening to The Smiths and the guitar playing; I was influenced by that. I also like the 80s C86 scene like The Field Mice, The Wake and Felt—that kind of guitar sound.

Because I record at home the writing process is influenced by the recording sessions. But yes, The Smiths had an influence, lyrically too. At the beginning I wanted to write things that were miserable but tongue-in-cheek, and maybe that’s something inherently Mancunian. A lot of people refer to it as “miserablism,” which I’m ok with.

As time went on, I started to listen to a lot of Wild Nothing and they were going more towards having a lot of synth parts. Working in a record shop, I listened to all kinds of stuff, so I wanted to incorporate more and more things into it. It had changed but a lot of people were saying this was from Manchester and Smiths-esque, which came across sometimes as lazy journalism. Although, I guess it’s hard not to compare because of their musical legacy.

M: When did you play your first gig?

RK: Well, it was terrifying. I’m not an extrovert or outgoing when it comes to social situations. Having to stand on stage in front of everyone was strange. I think the first gig we played was in 2011. It was in a bar called The Roadhouse which actually shut down about two years ago. It was quite legendary so I’m glad we got the chance to play there. I remember the first gig was just nervousness, but about two songs in (and this is a thing that always happens to me) you start to forget that people are there and you start focusing more on what you’re playing and singing and then you kind of disconnect. Well, I do anyway. It went from never playing a gig before to one song in and it was fine.

It’s difficult when you’re supporting because you’re not sure if people are there to see you — or do they like it, think it’s good? Once you forget about that it’s okay.

M: What kind of bands have you supported?

RK: Probably the biggest band we’ve supported was Mac DeMarco. We played at the Albert Hall in Manchester. I think it was about 3,000 people. Meeting Mac DeMarco as well was great and very interesting.

Luckily, because Manchester has quite a close music community, we have a lot of friends who are either putting on shows or telling you about bands who are coming into town and there are a lot of chances to support bands we actually really enjoy and like.

M: Am I right in saying that you have a good relationship with Tim Burgess from The Charlatans?

RK: Yeah, my auntie works in the record shop and she used to follow Tim around when they were touring, and they were friends and whatnot. Actually, it wasn’t until recently that Tim and I started [communicating more]. As a kid, I’d gone to a Belle and Sebastian concert with Tim and my auntie and then gone off and lived and started working in Piccadilly Records and then I’d see Tim in the shop and that’s how we started to speak again. So he’s been around, but I’ve not really been aware of it. But recently he’s picked up on things I’ve been writing and has been tweeting about it and put us on a couple of festivals including the Tim Peaks Festival. He’s been a great support to us and other bands and he takes the time to speak to everybody.

M: Is it strange for the musicians who play with you live to essentially be playing your songs and arrangement?

RK: I don’t want it to be that way—that I’m basically a conductor or puppeteer. Everyone in the band is aware that they’re live performers. But imagewise, we’re the band. I don’t want to ever advertise that it’s just me. When I create at home I think that’s the sound I’m looking for, then we can go together and perform it as Horsebeach. They’re all fine with it as they all have other bands too. They all have their creative output somewhere else. They’re good enough musicians to do their own thing with it — which they often do.

M: I read somewhere that you write about things which are important to you and that songs reflect where you were and how you felt at a particular time and place.

RK: Yes, they seem to have become more personal actually. The first album was interesting as it is for every band, because it’s the only album that includes everything that happened before and up to the point of recording. When you release the second one, it’s about what happened between the first and second album. I was reading a lot at that time and wanted to create fictional stories which were not really about me. So in the first album, some of the songs are about fictional characters and stories. The second album was more about how I was feeling. Any emotional turmoil is easy to write about.

When I write, I basically walk around and jot things down all the time. The new album is coming out (the fourth), which is one of the reasons I wanted to come to Tokyo — to see a new environment and see if it triggers anything to write about, which it has. And one of the main themes of the new album is this weird loneliness in Japan. There so many people and it’s so busy, yet you can walk through Shibuya crossing or something and as someone who doesn’t speak the language that well — there’s often a strange kind of loneliness. 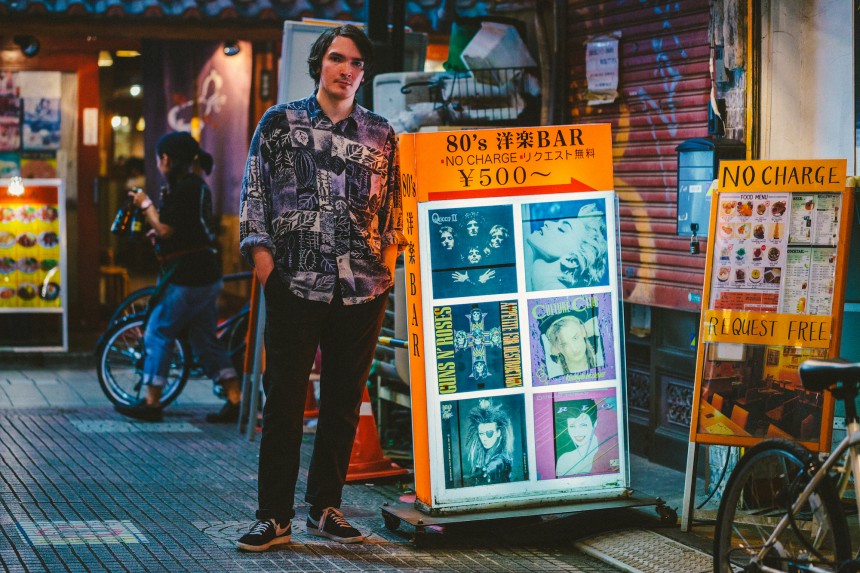 M: Are you a fan of Japanese music?

RK: Yes. I love the classic stuff like Hosono Haruomi, Happy End and that kind of thing. Even new stuff like Mitsume. It was hard to find that stuff in the UK but in the record shop we were all interested in it, a kind of city pop revival that happened. People kept looking further and things kept on being reissued. Both Japanese music and Japanese literature were things I was interested in before I came here.

M: Do you have a following in Japan?

RK: We do have Japanese fans.  I see the odd tweet and people posting about us and we are stocked here in places like Tower Records and it does seem to sell apparently. But it’s nowhere as big as other places.

RK: I’d really love to play here. I just need to find some musicians and find somewhere to take on someone without a band currently…then I’d love to play here. I’d also like to try playing by myself as it’s all there, the backing. And I can play different bits and stuff. So yeah, I could probably do that actually.

M: Are you going to be in Tokyo for a while?

M: You have your own label don’t you?

RK: Working in a record shop gave me an insight into seeing all these bands, independent bands, releasing their own music. I saw the process and knew how to do it, but for reasons that maybe was down to making it look like a proper label I came up with a label and started releasing threw that.

M: Do you have any advice for bands based in Japan?

RK: One of the main things about where my band is and the position I’m in is that it’s mostly been organic. And I’ve always been vocal about maintaining independence. I’ve never really had a PR campaign or anything like that and almost every gig we’ve been asked to play (we don’t ask them). I didn’t ask for interviews — you came to me. So that organic process is quite helpful and everyone who finds you feels like they’ve found you by themselves and discovered you and they tend to stick around a lot longer. So actually a lot of the people now who are supporting the Kickstarter campaign have been there since the beginning. It’s a slow thing but I think people invest in the whole process and that kind of independence. A lot of bands are very insistent about sending demos everywhere and trying to get signed but I’d probably spend some time looking into how you could do it yourself. If it’s good enough people will want to listen to it and find it.

Find more info on Horsebeach and their fourth album at Kickstarter, Bandcamp and Facebook.