Why CDs Are Still Big in Japan

On the country’s love for the plastic disc

In a country renowned for bizarre obsessions, there’s one that boggles most minds. No, it’s not Japan’s dedication to vending machines that dispense everything from canned coffee to panties or bizarre beauty products or strange cafes, but the country’s love for CDs. Two years ago, Forbes reported that CD purchases made up 85 percent of all music sales in Japan.

In recent years, plenty has been written about Japan’s ongoing love affair with the plastic disc. But while CDs have essentially become a pop culture relic everywhere else, why are people in Japan still buying these little pieces of ‘90s nostalgia? Are the big wigs in on some huge conspiracy to keep Japanese music lovers in some weird Groundhog Day loop or is this just another phenomenon westerners can throw into the ‘weird Japan’ basket?

Rise and fall (and rise) of Tower Records

Take a short stroll from Shibuya station and you’ll stumble across the monolithic Tower Records store towering over 1-chome in Shibuya-ku in its red and gold glory.

While most CD stores were shutting their doors in 2012, Tower Records Shibuya became a music industry anomaly by actually increasing in size, adding a bookstore, a live space, and a cafe to their site to fill the store’s massive 5000 square meter block. It was a bold move that essentially reinstated the store’s confidence in the life of the CD.

One reason behind the CD’s vitality in Japan may revolve around licensing. While other countries have fully embraced the notion of downloading and streaming music, Japan is reticent to dive in. This is potentially due to the slow rollout of online streaming services and lack of options, thanks to big record labels making licensing and management deals rather confusing.

Editor and music writer Noemi (24) says that she uses Spotify but its restrictions are its biggest downfall. “I do have Spotify but I barely use it because of its time limitation.” Teacher and die-hard music lover Yuta (28) falls into a similar category when asked whether he uses streaming services. “I kind of do,” he explains. I don’t pay to be a premium member, but I have Spotify on my phone.”

So, if streaming is difficult, why not take the questionable but often well-trodden route of illegal downloading like so many other nations? Well, the ethical dilemmas of pirating also come into play. “Illegal downloading is hard here. Most of the download sites are in English and if you can’t understand English, that can be tricky. Also, Japanese people are so majime [serious] that ‘illegal’ downloading is actually considered bad,” Noemi explains. 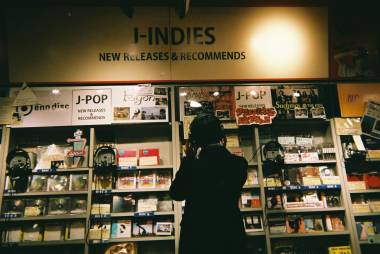 Beyond the practicalities, Japan has a rich collector culture; the Japanese propensity to turn love into full-blown obsession has helped keep music in the physical realm.

It’s a quirk music businesses have managed to manipulate (for better or worse) for decades now. Special editions, reissues, prize competitions and other marketing gimmicks continue to fuel what Noemi explains as a ‘groupie mentality’.

“More than anything, I personally think Japanese people have a groupie mentality, in a good way,” says Noemi. “So, if your favorite artists release an album, you want it physically, to show that you support them. Not to mention that you can get a ticket to meet the bands with CD sometimes.”

Fully aware of the phenomenon, Noemi falls into the category at times herself. “I buy CDs when my favorite artists release them or the visuals are so good that I want them for its aesthetics,” she says.

Aesthetics also play a key role in the Japanese musical experience, “I prefer CDs to downloads because I have the desire to physically possess what artists make. And there’s this inexplicable sense of joy and excitement I can feel as I open the package and smell the lyric booklet. I even enjoy just seeing my whole CD collection in my CD rack at times. I like CDs with cool cover artworks.” Yuta explains.

So, what does the future of CDs look like in Japan? Well, like the way of the rest of the world, Yuta predicts CDs are looking to be a slowly dying breed. “Honestly, I don’t think CDs are very popular even in Japan anymore. But if it ever appears to still be popular in the eyes of foreigners, that’s probably because they were way too popular back in the ‘90s and they’re half way through going downhill. But they’re definitely dying out.”

The move to wax seems like a potential evolution, “Previously I didn’t buy vinyl records because I didn’t have a record player until very recently, but I will start buying them from now on,” says Noemi. “I’m definitely planning to start buying vinyls in the future when I can afford a decent record player and speakers and stuff,” Yuta agrees.

Though, since Japan’s love of culture really marches to the beat of its own drum, to make predictions on whether the future of music consumption is plastic, wax or digital downloads are still anyone’s guess. But for now, CDs are still here and kicking on, so let’s try and appreciate the ‘90s nostalgia.