A modern checklist for ancient celebrations

From January to May each year, the “Sakura Front” moves north from Okinawa, and with it a fervent wave of hanami (cherry blossom viewing) parties sweeps across Japan. The magnitude of modern hanami celebrations has continued to grow since pre-calendar Japan, when the blossoming sakura indicated to farmers it was time to sow their rice crops. Feasts were held under cherry blossom trees in the hope of a good harvest, and to welcome the gods to their fields.

The first flowers to be the object of blossom-specific appreciation festivities, though, were actually ume (plum) blossoms. Plum trees came from China during the Nara Period, a time when Japanese culture and lifestyle were strongly influenced by the Chinese Tang Dynasty. Ume trees were the choice of aristocratic gardens and spring festivities.

The following Heian Era saw the ousting of Tang Dynasty influence and the reinforcement of traditional Japanese virtues. Favorability moved away from plum trees to sakura. The emperor of the time, Emperor Saga, held what is thought to be the first prototype for modern-day hanami in 812. There was singing, dancing and feasting. Annual celebrations ensued, but were still limited to Kyoto-based garden parties of the nobility.

During the Kamakura and Momoyama Periods, the culture of hanami grew beyond Kyoto, spreading amongst samurai circles. Warlord Toyotomi Hideyoshi held several benchmark-setting hanami bashes. One in particular, held in 1594 in Yoshino, Nara, saw an estimated 5,000 in attendance, including other powerful warlords, who are said to have partied for five days.

These days, competition is fierce for hanami picnic real estate, so once you decide on a location, get in early, and take with you all the necessary provisions for a customarily festive affair. To be safe, you can stake claim to a picnic patch by laying down your mat earlier in the day. 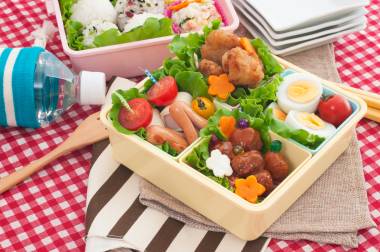 Never missing a beat with seasonal celebrations, homeware and variety stores (like Tokyu Hands and Don Quixote), discount stores (like Daiso and Seria), and the ubiquitous conbini are generally replete with hanami picnic trappings.

1. Hanami-zake or sakura-zake – “Cherry blossom viewing sake” and “cherry blossom sake,” respectively. This refers to a charming little cup of sake that has a salted sakura flower immersed in it. While this drink won’t be available pre-made, sake is easily purchased and fallen (not picked!) flowers are abundant.

2. Other beverages – Hanami has a long history as a nomikai (drinking party), so be sure to come prepared. Bonus points if the beverages are sakura-themed—floral-adorned beer cans, pink sparkling sake and champagne, and non-alcoholic options like sakura-flavored tea, soy milk drinks and cola.

3. Hanami bento – The definition of a hanami bento seems to simply be a boxed lunch eaten during hanami. Any mixture of standard elements may appear—grilled fish, croquettes, tamagoyaki, or simmered vegetables. If you can’t make your own, these are commonly available at convenience stores, supermarkets and, for a fancier version, department stores. (See Metropolis’ article about the best recipes for your hanami bento!)

4. Finger food – These must be shareable. Popular options include karaage, edamame, crumbed prawns, inarizushi, sushi, tsukemono, wieners, sakura-laced onigiri, cut up fruit and vegetables. Portable barbecues are allowed at some parks, and freshly grilled finger food is a great option.

5. Sanshoku dango and sakura mochi – These have been a part of hanami picnics for hundreds of years. Sanshoku (tri-color) dango are skewers of pink, white and green sweet rice dumplings—pink for spring’s cherry blossoms, white for the winter’s snow, and green for summer’s yomogi (mugwort)—representing the seasonal transition. Sakura mochi feature pink-tinged rice wrapped in a pickled sakura leaf.

6. Water, liver tonic – Futureproof yourself with water and a bottle of Hepalyse or Ukon no Chikara, two commonly available liver tonics. Hepalyse is a blend of turmeric and—literally—liver; Ukon no Chikara is just turmeric. Drink one ideally before frivolities commence, but otherwise during or after.

7. A “leisure sheet” – Depending on the weather and your sensibilities, you can acquire a fabric rug, bamboo mat and, if you like a little extra padding, a zabuton (cushion) from homewares stores. Otherwise a plastic tarp (usually blue) known as a “leisure sheet” will be available more widely. Note: mats are treated like indoor spaces, so shoes should be removed and left to the side.

9. Rubbish bags – The trash facilities at parks are generally not sufficient to house the extra detritus of heaving hanami masses. So you need to take your trash home with you. Best to bring enough bags to handle things as normal in Japan: one each for plastic bottles, cans, glass bottles, burnables.

10. Warm things – Although hanami is a spring activity, the weather can still be chilly, particularly if you’re planning on yozakura (night blossom viewing), so best to bring along blankets, scarves, or just some extra hanami-zake.