My favorite museum in Tokyo is the quaint and charming Yayoi Museum. Not only is the building pleasant, old-fashioned, and a little out of the way; the venue’s exhibitions usually feature excellent artists with whom I am not overly familiar. In other words, I always have a sense of discovery when I go there.

The latest exhibition, Kazuo Kamimura: Anatomy of Beauty, is a good example. It introduces the art of famous comic illustrator Kazuo Kamimura, whose fame may have faded since his heyday in the 1970s, but who definitely deserves to be remembered. 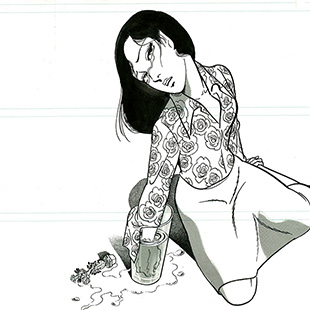 Kamimura had a relatively short life, dying in his 40s, but he packed a lot in. His career coincided with the rise and duration of “gekiga,” a more adult-oriented comic genre that featured sophisticated storylines, psychological depth, and strong characterization; and which favored a style that juxtaposed expressive innovation with gritty realism. The term is perhaps similar to what’s meant by “graphic novel” in English, but with a much wider and deeper cultural impact.

The main delight of gekiga to modern audiences is the wonderful retro quality, revealing a world where style and sexuality had a sharper edge than they do today, in these more relaxed times.

In the gekiga world, Kamimura was especially important in blazing a trail for female characters. Previously, women had appeared in comics only as adjuncts to men, but taboo-breaking comic series like Dousei Jidai (“The days of living together without marrying”), and Sachiko’s Happiness, Kamikura featured women as central characters, and found innovative ways to express their inner world of ideas, feelings, and even sexual climaxes. 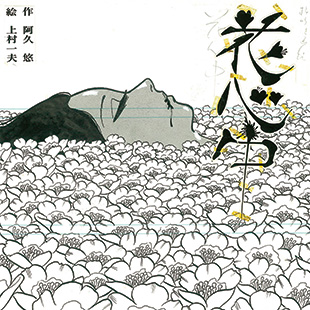 Using unusual angles, symbolic objects, and revealing close-ups, Kamimura not only conveys the moods of his characters, but he also succeeds in creating stand-alone, aesthetically pleasing imagery full of luscious lyricism. His artistry led him to attempt more ambitious projects, such as Yaeko, a comic series dealing with the life of the Japanese artist Yumeji Takehisa, another artist who died in his 40s.

This Takehisa connection is pertinent because the Yayoi Museum is twinned—and even physically joined—to the neighboring Yumeji Takehisa Museum, where you can also see a permanent exhibition on Takehisa. Indeed, I often think of these two museums as Siamese twins.

The exhibition is well-organized, with the original artworks clearly arranged under the titles of the various comics that they appeared in. There’s also some English guidance—even though there are few foreign visitors—possibly because it’s in the vicinity of Tokyo University.

Through the popularity of his comics, Kamimura became something of a celebrity and bon viveur. There are photos showing him and some of his associates. Through his fame, he was also able to branch out into designing posters and record covers, and the exhibition also includes a selection of these.

From all this, one gets the impression that he was perhaps burning the candle at both ends, working hard and playing hard, which might account for his early death. Luckily, though, his art lives on.