The four-piece act known as Kinlay has been jamming around the Tokyo pub and club scenes since 2003, performing their melange of rock/funk/reggae with elements of dance, soul and Afrobeat. Frontman Andy MacKinlay tells Metropolis the band’s inspirations span from Bob Marley, Jimi Hendrix and Guns N’ Roses to Jamiroquai, Alabama Shakes and Skrillex.

“We don’t have a particular political message or theme that goes through all the songs,” says MacKinlay, who also rocks a mechanical engineering degree from the University of Manchester. “We deal with typical themes such as love, sorrow, uncertainty, doubt, anger and fear—but try to have a fun side or positive twist to our music too.”

For Kinlay’s 2012 release, Golden Zero, MacKinlay brought in a number of seasoned musicians and producers to create a sun-drenched, feel-good sound. Over the summer of 2013, the upbeat reggae single “No Time to Wait” went on to receive solid airplay on Tokyo’s InterFM. 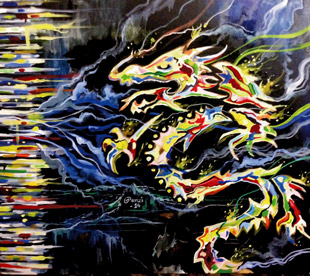 Backing MacKinlay’s vocals and guitar are Seiji Fukuda on keyboards, Yukako Ishii on bass and Hiroki Murakami on drums. The band’s fourth studio production, a double-album consisting of Black Dragon and Lost Treasures, is set for release on January 28 at Eggman in Shibuya, with the first disc comprising nine new songs and the second featuring rerecordings of older tracks from the mid-2000s. The video for the new album’s first single, “Shine on Me,” was filmed by local multimedia outfit, Drawing a Crowd, on location in Roppongi.

In February, the band plans to build up their western fanbase with a mini-tour of Osaka, Kyoto, Kobe and Nagoya.

“The most important thing is to enjoy music and hopefully find the music that can be a soundtrack to your life,” MacKinlay says. “Lyrics aside, music is something that transcends language and cultural barriers, and probably the only thing that can easily take you away from the stress of everyday life.”

Those in search of a little getaway might also want to check out Kinlay’s jam session on the first Wednesday every month at What the Dickens! in Ebisu.