When Metropolis talks to Lily Allen, she is speaking from her countryside home in Gloucestershire on a Sunday morning, where she’s about to prepare lunch for her husband and two daughters, wearing her most comfortable pair of sweatpants—a contrast to her vivid, flamboyant stage outfits.

The singer-songwriter is getting ready to embark on an Asian tour, which brings her to Japan for the first time in six years. 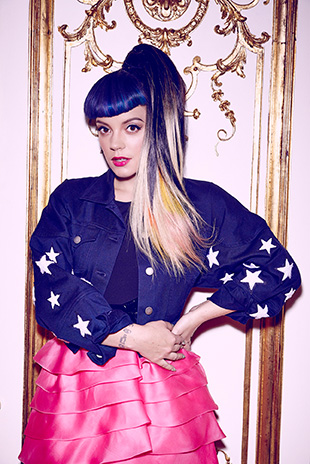 This time, however, Allen visits as a mother, bringing along her husband, Sam Cooper, and children, Ethel Mary, three, and Marnie Rose, two. The singer plans to show them around, name-dropping the likes of Tokyu Hands and Kiddy Land with the ease of a Tokyo resident.

“I’m really excited to show them the bits of Japan I know already, and we’re excited to discover bits of it that I haven’t seen before,” gushes Allen. “And of course, I can’t wait to come over and play a show.”

The voice we hear is a thoughtful one, offering eloquent musings on music, parenting and social affairs. After all, she’s the same provocative pop star whose outspokenness has, over the years, been as renowned as her music and been the subject of many a controversy on both sides of the North Atlantic.

In 2013, her music video for “Hard Out Here,” a single from last year’s album Sheezus that satirized the objectification of women in pop culture, met with heated reactions online. Despite being lauded by Rolling Stone as a “feminist anthem,” the video garnered accusations of both sexism and racism due to its inclusion of scantily clad black and Asian backup dancers—which the singer denies was the intent behind the clip.

“We made a video that [we] felt fit the song, and wanted to highlight what the lyrical content was about. It’s difficult to quantify, isn’t it? There isn’t a formula for it. You just kind of do what you do and see what happens,” says the 29-year-old Londoner. “And what happened, happened. I don’t really know how to digest it all, to be honest,” she adds with a laugh.

Furthermore, Allen says she’s not out to provoke; her songwriting inspiration comes from a myriad of directions. 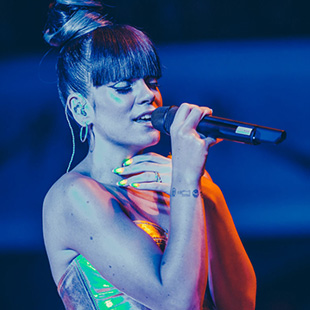 “It’s just different all the time. I think that’s why you see such a range of subject matters and stuff with my music,” Allen confirms. “I write very much in the moment, so it’s totally dependent on what’s going on in the world or what’s happening in the news, whether I’ve had an argument with my husband or one of my best friends hasn’t called me in a couple of weeks—whatever. That’s my inspiration: my relationships and my views on current affairs.”

Allen goes on to voice her worries about social media. It’s a topic she’s familiar with, having started her career as an artist on MySpace during the social networking site’s heyday—an era before the reign of Facebook.

“I took advantage of the social networking side because it wasn’t really something anybody else was utilizing at the time,” she comments, stating that most musicians are on social networks today. “If I was starting out, I probably wouldn’t go there; I’d probably go somewhere where everybody else isn’t.”

However, she acknowledges that the internet has a dark side, and is worried about the present generation growing up with it.

“There’s a whole new area that we have to protect our children from and keep a very close eye on it,” she says, tone that of a concerned parent, defining the internet as a non-physical entity on which kids’ activity needs to be monitored.

“I think something has to happen because there are a lot of people or children … young people, that are communicating with each other in not a particularly healthy or good way—or kind way.

“It definitely breeds quite a negative form of communication and that’s not necessarily something I want for my children. However, I’m not going to be one of those parents that says, ‘Right, no computer for you!’ So I think it’s about finding a balance.”

Her passion for raising her kids is evident in her voice, perhaps even more prominently than when discussing her music.

When asked how she would like to be remembered, she contemplates it for a moment before professing with a laugh: “As a good mother.”