An exercise in rolling your own

Most flights into Japan serve a small bowl of soba noodles with the main meal, a hint of the importance put on these buckwheat noodles in regards to Japanese cuisine. Indeed, soba is often regarded as Japan’s version of pasta. Many people make these hearty noodles as a hobby and, after attempting to make them myself, I can understand the attraction. Mixing, kneading, rolling and cutting the noodles are all therapeutic acts, especially compared to the hectic pace of the day job.

I recently joined a group of Japanese acquaintances to make soba at Hope Lodge, near Lake Shirakaba in Nagano Prefecture. Soba making is just one of a broad menu of indoor and outdoor activities visitors to this log cabin-style lodge can enjoy.

Our sensei quickly got us scrubbed in and aproned so we could begin. On each of three work tables, she had laid out a large red lacquer mixing bowl, premeasured soba flour (in Nagano, always a mixture of buckwheat and regular wheat flour) and water. Another bowl of premeasured flour awaited its turn, intended for rolling out the noodles. 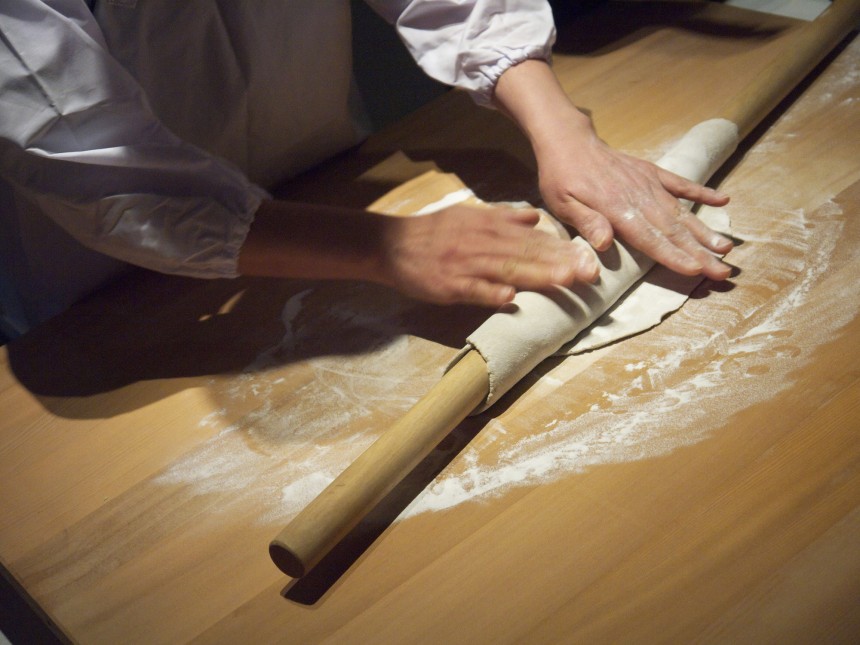 We began by emptying the soba flour into the bowl and adding about two-thirds of the water. This we were told to mix lightly, with two fingers of one hand, to create moistened crumbs. We then added the remaining water and continued mixing, to create pea-sized crumbs. It hardly seemed enough water, but as we stirred the crumbs became clumps and finally we had a single lump of dough.

Then the kneading commenced. Our teacher advised that it would be easiest if we used the curvature of the bowl and kneaded downward. A surprising amount of kneading was required to achieve the correct elasticity.

We then rolled the dough into a ball and transferred it to the lightly-floured table, where we flattened the dough with our hands — “a bit like making a pizza crust,” said our teacher.

Japanese rolling pins are just long dowels. They are rolled along the dough with the palms — first, hands together for the length of the palms, then hands apart for the length of the palms. Repeat, repeat. This ensures that the pressure on the flattening dough is relatively equal. The ever broadening circle of dough is given a quarter turn each time we finished rolling from one end of the circle to the other. 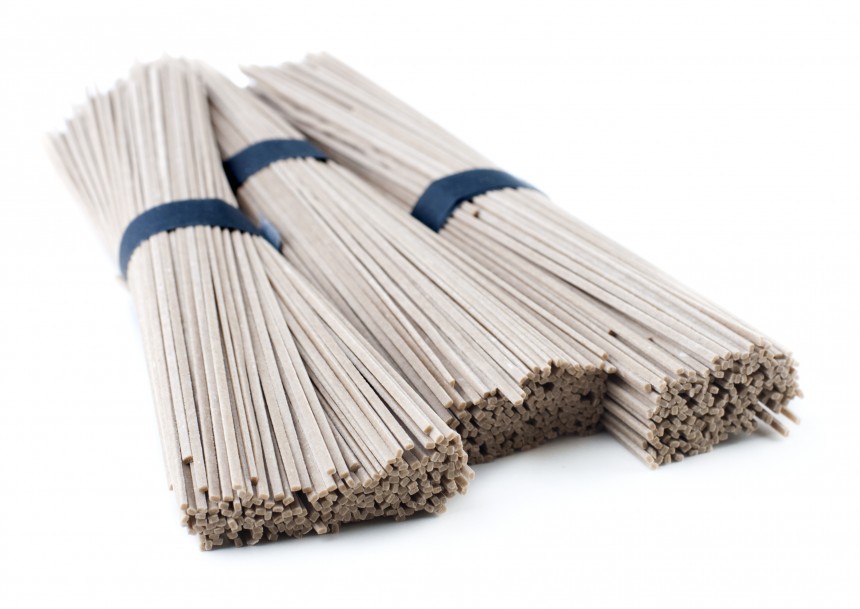 Eventually, our flattened circle was ready for the next step. We sprinkled a stripe of flour onto the dough and then rolled it onto the rolling pin. We gently pressed and rolled, with the result that when we unrolled the dough it was significantly longer. Repeating that on the other axis, we produced dough that was roughly square.

One of our tables learned the importance of that stripe of flour when theirs was insufficient and the dough got stuck. When she couldn’t unpick the mess, the teacher swiftly reworked the dough back to a ball and rolled it out again. What had taken us about half an hour, she accomplished in just a few minutes.

Next we were instructed to fold our dough into thirds, making it a suitable width for cutting.  Using a komaita (a special wooden cutting guide that holds the dough in place while ensuring an even cut) we cut the dough into thin strips — the noodles. They seemed impossibly thin, but once cooked, plumped up to a more normal width.

Yes, cooking and eating were the final steps — our reward for all that work. The soba was served on a bamboo tray, garnished with thin slices of nori (dried seaweed). We eagerly picked it up with our chopsticks and dropped it into the dipping sauce. Accompanied by tempura and a small salad, it made for a really tasty meal, not to mention a fun memory.

Vicki L Beyer is a freelance travel writer/book reviewer who also blogs about experiencing Japan. Follow her blog at jigsaw-japan.com