Man With A Mission

Incendiary rock metal festival Download is coming to Japan for the first time ever and the line-up is legendary. Judas Priest, Slayer and Anthrax lead the lineup however amongst these never-say-die gods of metal, one band stands out. Man with a Mission (MWAM) has only been around since 2010, they’re Japanese and, well, they’re half-man half-wolf.

All five members were created in a lab by Jimi Hendrix. Originally, they were used for evil deeds until Hendrix started to have second thoughts and decided to freeze them in the Antarctic. During this period of frozen contemplation, they listened to many different genres of music, which made them commit to dedicating their lives to making music if they ever escaped. Global warming allowed them to thaw and they began their music career in Tokyo.

The eclecticism of playlists during their time in the ice is one explanation for the mishmash of influences in MWAM’s sound; a serving of 90s grunge, metal and alt-rock with a side of electronica, seasoned with the sensibilities of pop. With catchy melodies and earnest lyrics, they’re one of the least heavy bands playing at Download on March 21. Still, with legions of dedicated and energetic fans, numerous songs featured in anime and film, star-studded collaborations (Fall Out Boy, Boom Boom Satellites) and five out of five albums going Gold in Japan, there can be no denying MWAM’s significance.

To be sure, the wolf thing is pretty freaky. But what is metal if not theatrical, providing the listener both escapism and flashes of truth amongst the hyperbolic, the dark and the grotesque. Perhaps the strangeness of MWAM is an asset, when standing with a line-up of foreign bands for the first time the British-born festival is held in Japan. Metropolis spoke with Jean-Ken Johnny, guitarist, vocalist and sole spokesperson for the band. 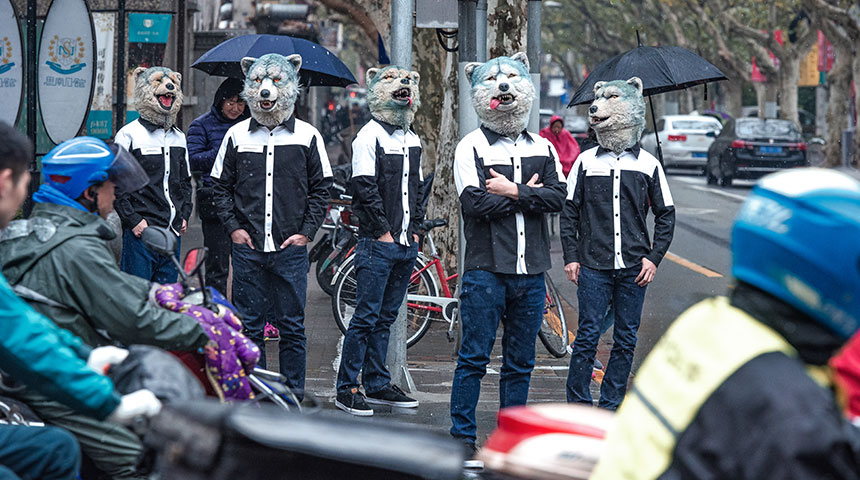 Metropolis: How do you feel about performing at the very first Download Japan?

Jean-Ken Johnny: We’re so excited to be part of it again as we took part in Download in the UK before and it’s great to be doing it again.

M: Are there any performances at Download Japan that you are especially looking forward to?

M: Your songs mix English and Japanese, what is the reason for this bilingual approach? Did you learn both languages when you were frozen and listening to music?

JKJ: We were programmed to use many languages but I’d say English is one of the ones we can use best. And it’s probably because most of the music we listened to during those days were bands from the US and UK.

M: Sometimes English-speaking audiences unfortunately have stereotypes about Japanese bands. Although you were created in a lab, you started your music career in Japan so you are a ‘Japanese band,’ of sorts. Do you think being half-wolf has allowed you to avoid national stereotypes?

JKJ: To tell you the truth, I guess it does. Many people know that ultimately music can cross over borders, but sad to say sometimes where the band comes from impacts the impression they make. We’re wolves and I guess that’s pretty weird but it also gets rid of the image of what part of this world we are from and it somehow makes you focus more on the music.

M: Your lyrics in your newest album Chasing the Horizon look to the future, such as in 2045 where you discuss AI. Are you optimistic or pessimistic about the future?

JKJ: Everything happens for a reason but when you notice it most of the time it’s already too late. The world and especially human culture and technology have evolved very rapidly in history. It gave us a lot of convenience, a lot of prosperity, but at the same time it might have been too much for us to handle. Whatever may come, whatever we may confront, they are the consequences of what we’ve done to ourselves. But, as we learn from history, I believe we always have the chance and the spirit to strive and find a way through.

M: In the past few years, Summer Sonic has introduced more DJ acts and Ultra Japan has taken place since 2014. What do you think about electronic music becoming more mainstream in Japan?  Where do you see rock music in the Japanese music scene?

JKJ: Fashions always come and go and following the trend is not the only way to enjoy culture. You can always enjoy music from each and every aspect that it has, and what’s important is if the music purely hits you. I’m a fan of the electronic scene too and I also enjoy absorbing it and trying new things in our tracks but that’s only “one” way of an approach. The rock scene in Japan is still very active and vital these days, and I believe there is a huge part that rock music can do in the Japanese music scene, and of course even in the wider world too.

JKJ: I appreciate that you find us in such a position. Frankly speaking, it would be a wonderful thing to be a glue that connects the audience to the music scene that we’ve been (and still are) in love with for such a long time. I do think it’s an important role for us to make new music but at the same time be the ones who carry on the heritage of the music that we’ve enjoyed throughout time.

M: Ozzy Osbourne (who has cancelled his appearance at Download due to illness) notoriously bit off a bat’s head on stage. We are concerned there will be a similar attack on wolves at Download Japan.

JKJ: It’ll be an honor for us to be bitten by the legendary Ozzy. We’ll make sure we’re clean.

Download Japan will be held on March 21 at Makuhari Messe. Buy your tickets through Metropolis; https://metropolisjapan.com/event/download-japan-2019/