“They used to be my favorite band.” A fan sentiment feared by many long-term musicians when writing new music. Even if Nirvana reunited today to release a new song, grappling with the challenging dichotomy of past vs. present would be an inevitability. Or, even more challenging, attempting to surpass the success of staple hits such as “Smells Like Teen Spirit.” For Japanese mixture-rock band, Maximum the Hormone, having a “franchised band” was the solution to this long-standing creative issue.

So, how does a franchised band work? “It’s a completely different band that plays different versions of Maximum the Hormone songs. I produced all the arrangements for the other band,” Ryo Kawakita, the guitarist of the band, also known as マキシマムザ亮君 (Maximum the Ryo-Kun), answers. “I have many ideas and wanted to show different aspects of our songs, but negative comments would flood everywhere if our band tried something new or slightly different to our fans’ expectations.” That led him to come up with the concept of a franchise band. 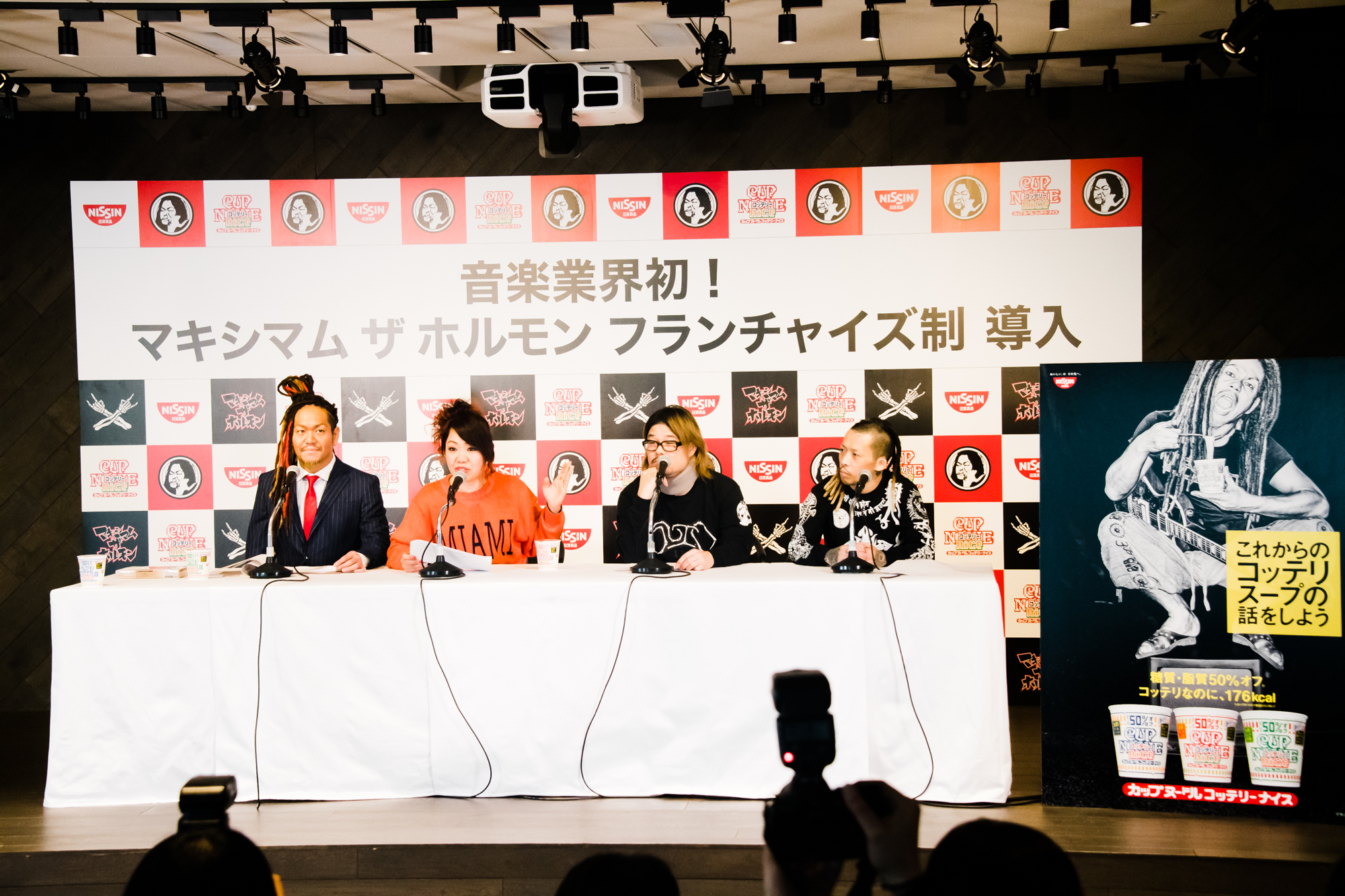 Maximum the Hormone at a press conference for the launching of the franchise band.

By having two different bands for the community of Maximum the Hormone, Kawakita is able to embrace the project’s diversity and the diversity of fan tastes. Perhaps one fan doesn’t like the flagship but identifies with the alternative outlet. Or perhaps another fan likes both but prefers the flagship. This idea was inspired by the cult culture of Ramen Jiro, a Japanese chain of ramen shops. A regular remix project could have been an answer if he intended to achieve this with minimum effort but, instead, he’s unwavering when making his ideas come to life and willing to expend as much effort as required. The reason was simple: “do what I want and not let anyone complain about it.”

Formed in 1998, Hachioji-based Maximum the Hormone has always drawn attention with its trademarks of intense live performances and heavy sounds. They also take their creativity seriously, often requiring fans to meet certain conditions to join their live shows, once insisting fans wear full-face helmets for sweat-soaked underground performances in the middle of summer. While their unusual ideas surprise fans, their music style stays genuine to heavy metal roots and, for decades, developing a cult following has been a remarkable achievement despite none of their songs being available on any streaming platforms.

According to Ryo-Kun, “to meet as many potential fans and like-minded friends as possible” is the reason they’ve continued producing music until today. Ahead of their first Europe tour in five years this June, Metropolis spoke to Maximum the Ryo-Kun on the Europe tour, next album, and his philosophy for the band.

Metropolis: It’s widely known that not a single song of Maximum the Hormone is available on streaming services. How did you survive the early stages of the pandemic without live shows or streaming incomes?

Maximum the Ryo-Kun: Actually, our songs are on platforms like Spotify now but only outside of Japan. It’s just like Ghibli movies [Laughs]. I tend to feel ups and downs even before the pandemic, so sometimes I feel like I should quit everything and do something else completely. However, once I start planning content for YouTube or being creative in general, my creative switch turns on, and I enjoy being in the zone. But if we try something slightly different, someone inevitably says the old stuff was better. I’m annoyed about the gap between what I want to do and what I’m supposed to do. That’s why I started the franchised band, for my creative mind rehab and to reach new fans.

M: Why do you still want to reach new fans despite your existing success?

M: Regardless of generation or age, I always feel there are many potential fans who dislike us without listening to Maximum the Hormone properly. I believe even those people can eventually like us if they try when it’s appropriate for them. I want to find those people.

M: From books featuring new songs to DVDs where fans need to clear a game to unlock hidden content, what inspires your constant creative output?

M: Of course, I admire legendary rock heroes, but I also respect the Japanese advertising industry. Catchphrases, commercials, or even running campaigns, everything they do is fascinating. I like movies or manga, but the adverts for that kind of content draws my attention more. These things don’t have a melody, but I can recognize a rock n roll spirit and I can feel the lyricism of hip hop in it.  I enjoy thinking about how I can reflect those creative approaches in our band. 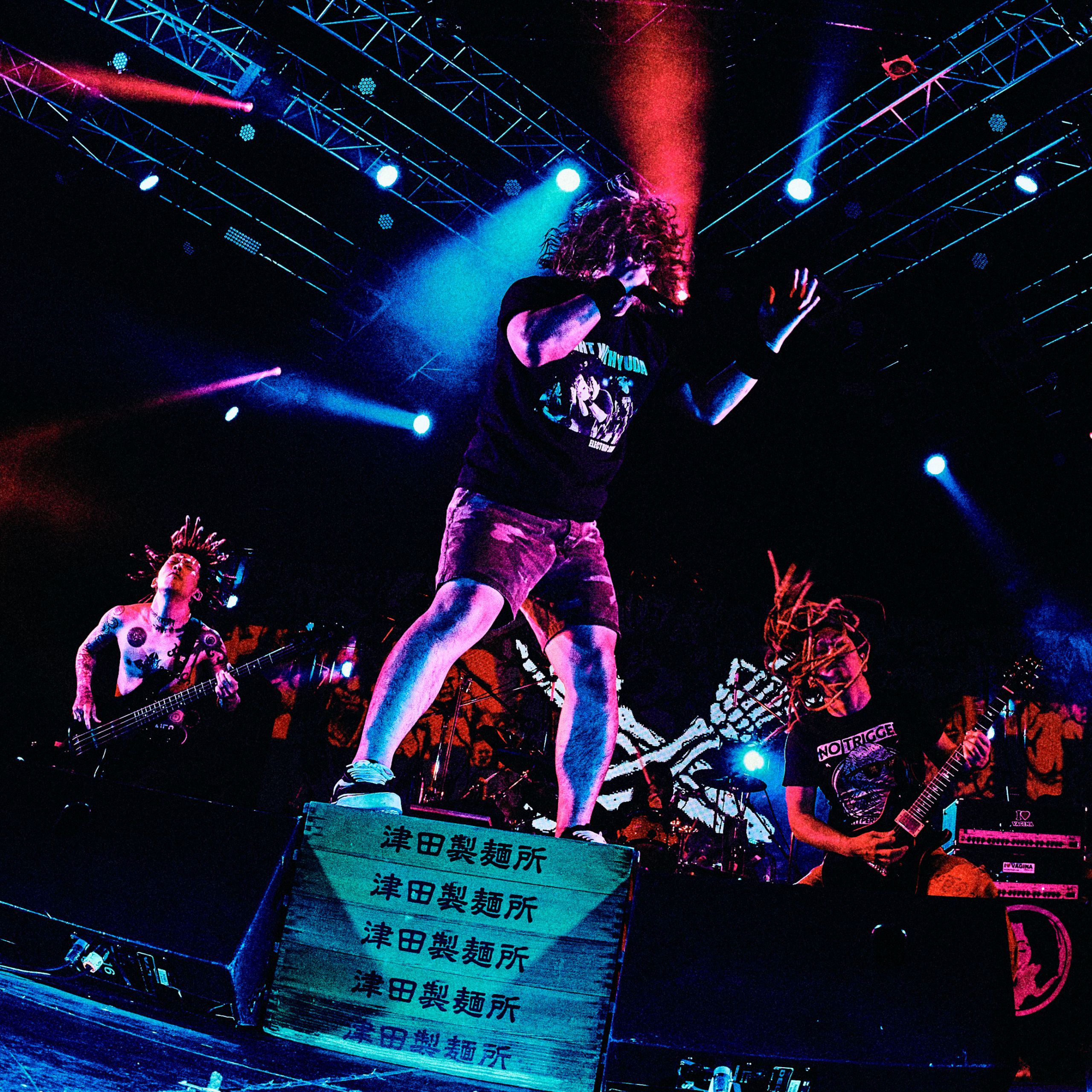 M: Is that why you released a new single as a book?

M: Yes, CD shops used to be the place to find new music but not anymore. Our music is not on Spotify in Japan, so there’s no chance to participate in playlists either. But I figured bookstores were still places for people to come and pick up whatever caught their attention. When releasing the song, I spent a lot of time designing the cover. The shiny side of the CD is visible on the cover page so that people know this book includes a CD. Our first book, released in 2018, became that week’s best-selling essay publication.

Following the success of the essay, the other band released another CD last year called ESSENTIALS, which comes with masks. I wanted to be the first rock band that produced the best-selling items at drugstores rather than selling masks as merchandise just because that’s what was needed. However, it turned out that it’s a very competitive industry, and there’s no room left for a rock band to be No.1 [Laughs].

M: Every MTH show sells out immediately. It’s very hard to get tickets. Do you plan to scale up your venue capacity?

M: I’m not thinking about it because closeness matters more than capacity. Performing on big stages for large festivals is fun, but I prefer smaller capacities. The rehearsal studio in Hachioji that the band always uses is the ideal size. We ran this special event campaign during the pandemic, where we exclusively performed for one person, one family, or small groups of fans who met each other during our events. Face-to-face interaction is the band’s core more than selling out arena-capacity shows.

M: Why is intimacy important to you?

M: Because I’m shy [Laughs]. My older sister (Nawo, the band’s drummer) is the opposite. She’s easygoing and vibrant and easy to make friends with. I’m not good at talking to people like her, but I wish I was like her and wanted to make a lot of friends. However, the thing is that anyone who likes my music is likely to understand me. So anyone who likes Maximum the Hormone is the people I care about.

Being in a band is the best form of self-expression because you’re basically saying, “This is music I play and what I like!” For me, this feels like you’re wearing your favorite band T-shirt when going to school. I’m looking for someone to point out my T-shirt to say, “That’s cool. I like it, too.” Nothing has changed in me since the day I first listened to music when I was a teenager. There must be many future friends who I just haven’t met yet. I want to meet them and be friends. 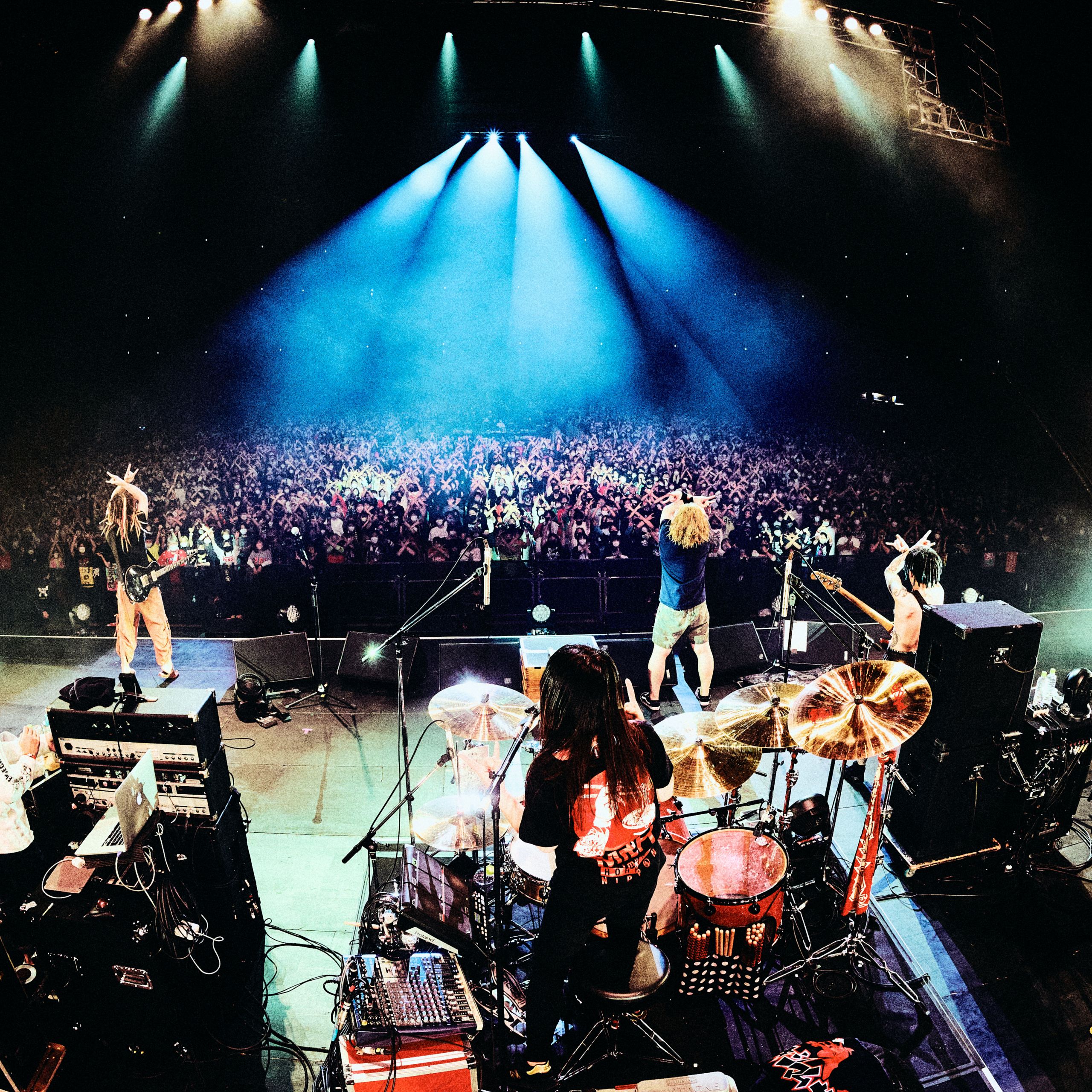 M: Do you have any plans for the future? Can we expect a new album soon?

M: I have a lot of ideas for new songs, but it’s really up to my motivation. I’m not a business-minded person, so meeting deadlines is challenging. Writing songs is about waiting for the moment when everything clicks. When it happens, the lyrics and melody match perfectly. I’m waiting for it. However, it wasn’t a difficult process at all when I wrote the opening song for the manga-based anime “Record of Ragnarok” because I’m a huge fan. So I just need motivation. Or if one of the most renowned manga series “Hunter x Hunter” finally comes out of years-long hiatus, it’s time for me to work on a new album [Laughs].

M: What are you excited about on this Europe tour?

M: My favorite band, System Of A Down, was the headliner when we were supposed to perform in 2020. It’s a shame that we won’t be able to play on the same stage anymore as they are not on Hell Fest’s lineup this year. But I’m still excited about performing outside of Japan! What’s good about Hell Fest is that there is a huge area next to the stage where you can buy T-shirts of literally every band. You can find exclusive rare ones, too. Sometimes, fans speak to me and buy me beer, which rarely happens in Japan. I’m looking forward to it.

M:Do you have any messages for international fans?

M: Our overseas audiences are quite fanatical as I think we’re probably a niche band in the global music scene. I’m so grateful to them for always supporting us and we want to go abroad to visit as many cities as possible. However, overseas fans tend to wear bootleg T-shirts. If you would like us to come to your city, please make sure that the T-shirts you are about to buy are the official merchandise, because that’s our main income while touring worldwide! [Laughs]. 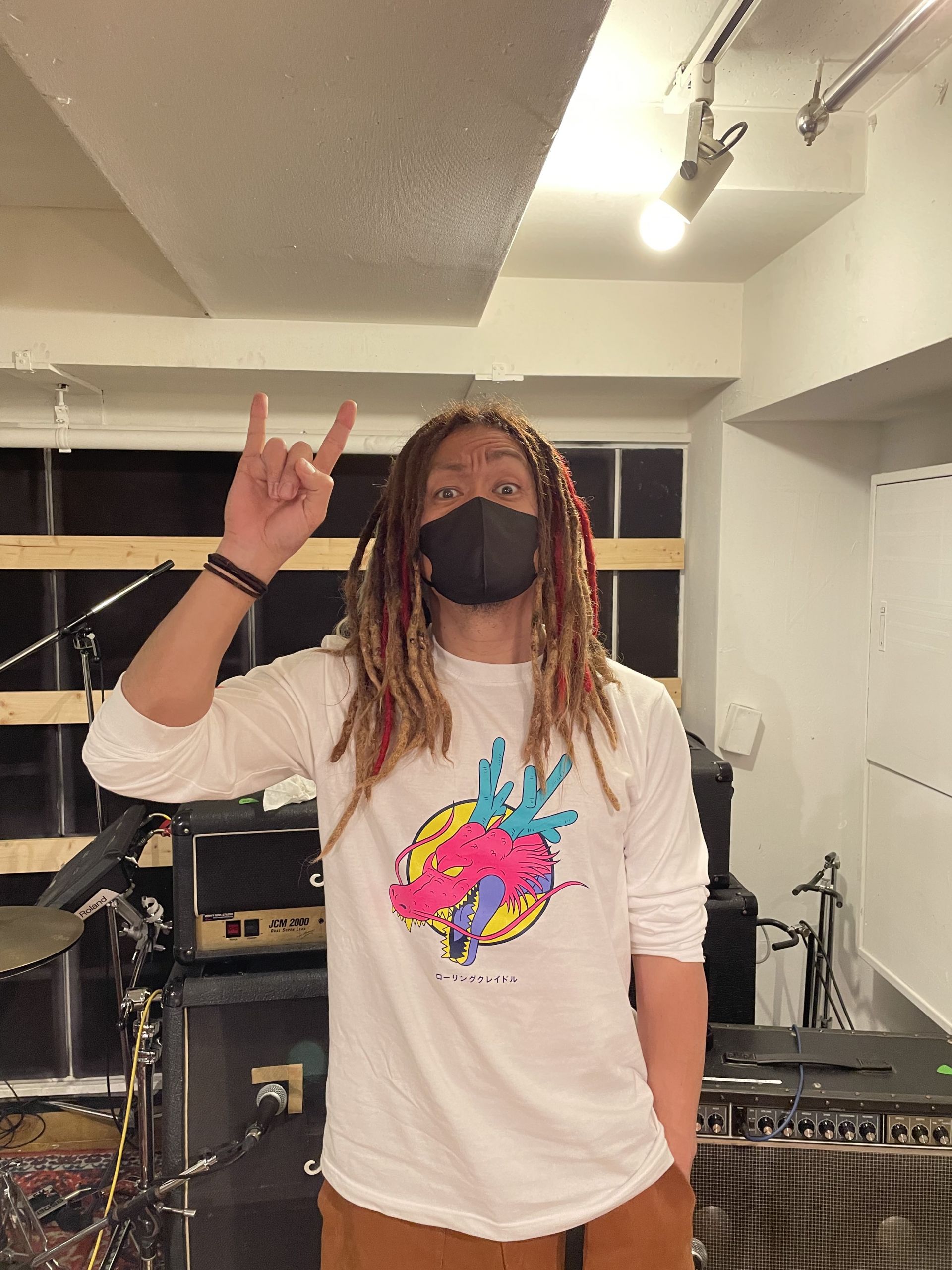 Maximum the Ryo-Kun at their Hachioji studio. He asked us to take a photo as a proof of this interview.