“Thump.” “Thump.” “Thump.” The repetitious sounds of the karausu that line the river of Ontayaki no Sato echo like the heartbeat of the small mountain hamlet in Kyushu’s Oita. They are also a testament to the traditional practises maintained there.

The pottery village, one of Japan’s most famous, is special for a number of reasons. Tucked away in a ravine surrounded by dense forest, it’s a picturesque place that’s reminiscent of a different era. Walking through its paved streets is like stepping back through time: boxes of teapots and bowls decorate storefronts; handcrafted plates have been set into the concrete of walls; vats of yellow clay sit outside, drying in the sun. 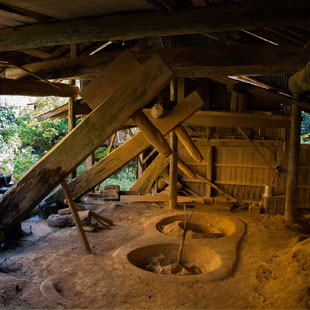 Of the 14 households in the village, 10 produce the heavy-duty ceramic of the village’s namesake. The style of pottery has been passed down in patrilineal succession for more than 300 years, since the first kiln was founded in 1705.

Each house in the village has its own wood-fuelled kiln and is built close to the river. The water is used to power the seesaw contraptions that powder the clay collected from the surrounding mountainside.

Resembling giant hammers, the wooden karausu have a sharpened point on one end and a basin on the other. When the latter is full, it sends the former cracking into the yellow earth.

Once the powder is formed, workers reconstitute it with water and dry it until it becomes malleable. A technique called “neritsuke” is used to make the ceramic wares, where the base of a piece is thrown on a kick wheel and the sides are built up using more common methods, such as wheel- and hand-throwing.

The wares are then decorated with comb-pressed geometric patterns, and left outside to dry on wooden boards before being fired and glazed in the kilns. All of this is done without the use of gas or electricity.

Ontayaki no Sato is a closed community; each family is allowed to appoint just one successor who will train at home, or undertake an apprenticeship at another workshop in the village. The work is done collectively, and when finished is stamped with the name of the village rather than the individual household or potter. Ontayaki no Sato is the only village in Japan that maintains such a production system.

Influenced by the climbing kiln that was brought to Japan from China, Sarayama potters first developed the ontayaki style in the mid-Edo Period. When the founder of the Mingei folk art movement, Yanagi Soetsu, came across the ceramic in Fukuoka in the early 1930s, he travelled to Ontayaki no Sato to learn more about it. 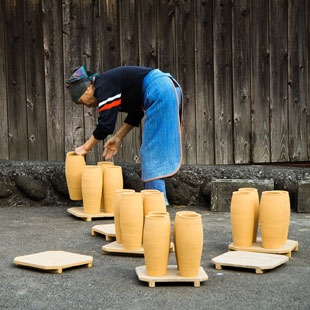 Onta pottery remained relatively unknown to the rest of Japan until the 1950s, when the world-renowned potter Bernard Leach moved there to study the craft. The demand for the ceramic increased dramatically, but the potters continued to employ traditional methods to produce their wares.

Today, ceramics shops in Tokyo and Fukuoka are the village’s biggest customers and bulk-buy for resale at a considerable markup. Visitors to Ontayaki no Sato not only get to experience firsthand tradition as it’s practised in a beautiful environment, but can do so without breaking the bank.

Each household has a store that sells handcrafted crockery in different colors and designs. Expect to have to go looking for the owners when you want make a purchase, though: life in the village is slow and quiet, and revolves around the production process.

Ontayaki no Sato is best accessed by car. You can also taxi there from Hita Station. Business hours vary depending on the pottery being produced. For more information, visit www.visit-oita.jp/spot/spot0315.html