A look into the creative mind behind art

From installations in train stations to paintings on bathroom walls, art can be found all around us. But rarely is it possible to observe the creative process in action, to know what the artist thinks and feels while creating his or her works. The “Open Studio 2017-18” by the Tokyo Arts and Space (TOKAS) studio allows visitors to do just that.

The open studio will be held at the TOKAS Residency, located in Sumida-ku. The event runs from March 9th to March 11th, and features live discussions and exhibits of the latest works by emerging artists of diverse backgrounds.

TOKAS Residency is home to eleven international artists who create works and conduct research during their stay in Tokyo. The disciplines of each artist varies, from painting and animation to theater and literature. Notable artists include Patrizia Dander, a curator at the Museum Brandhorst in Munich, Germany, and Kerstin Brätsch, a contemporary visual artist with a focus on painting. 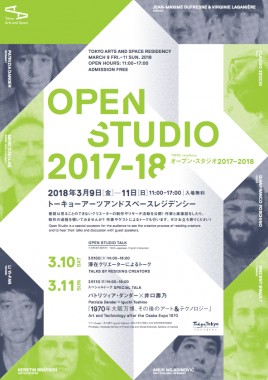 The eleven artists-in-residence, plus four additional international artists, will present their works and the creative processes behind their work as an exhibit for the whole duration of the event. There will be talks on the second and third days by the artists, which will be given with Japanese-English translations. The talks on the second day will be given by the resident artists, who will discuss their works and the thought processes behind them. The talk on the third day will be a dialogue between Dander and Professor Toshino Iguchi, from the Saitama University Graduate School of Humanities and Social Sciences. The two will discuss the intersection of art and technology in the Japanese art scene after the 1970 Osaka Expo and the ensuing “techno-utopia” boom.
March 9th–March 11th, 11am–5pm. Talks start 2pm. Free admission. Tokyo Arts and Space Residency, 2-14-7 Tatekawa, Sumida-ku.