It’s unlikely you’ll stumble upon Kuumba du Falafel by accident. Tucked away on the ground floor of a highway-side building in Shibuya, its sole identifier is a cardboard sign in the window.

Nonetheless, it looks like the secret’s out. The modest lunch counter’s seven or eight bar stools were packed shortly after opening for lunch, with hungry patrons squeezed in for the chance to taste Kuumba’s fresh, refined take on the Middle Eastern staple food. 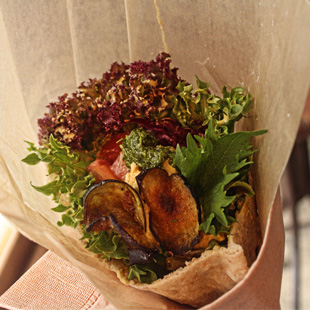 It’s modestly-sized, but the floor-to-ceiling windows let in plenty of light and make the restaurant feel much bigger than it is. If you’re familiar with the falafel as street food, the prices seem a little big, too. But while Kuumba’s larger portions aren’t cheap—a hearty falafel plate is ¥1,580—their lunch set is a good deal at only ¥1,000 for a half-size falafel sandwich and small bowl of lentil soup (available from 11:30am-2:30pm, Tuesdays to Sundays).

I start things off with an order of Waiola’s 100-percent coconut water (¥280). It’s a small serving, but the juice is sweet and refreshing, with a full-bodied flavor that pairs well with the rest of the menu. If coconuts aren’t your thing, Kuumba also offers a selection of organic sodas and a small wine menu.

While the meal is being prepared, my server delivers a “paper” plate made of china and gleaming cutlery. It’s a nice addition that signals the haute departure from the low-brow falafel you may be more familiar with.

The soup arrives first, a hot bowl of garlicky lentil broth cut through with earthy cumin and onion. It’s surprisingly thin for lentil soup, but with a warm, buttery taste. A small pile of sunken lentils add a nice texture when mixed with the soup. 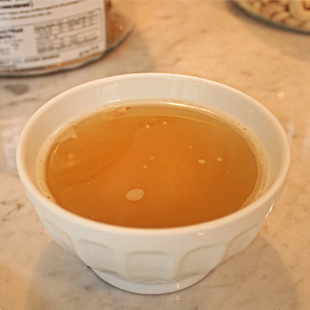 The main event arrives only a few spoonfuls in: Kuumba’s falafel sandwich, handed to me across the counter in thin parchment paper. At first glance, it’s like a bouquet of wildflowers, and smells just as fresh. It’s quite a presentation—big leaves of red lettuce, lightly fried eggplant slices, fresh basil pesto, and chunks of tomatoes and cucumbers that barely fit inside. I’m given a tube of house-made hot sauce that’s a bit thick and hard to evenly distribute, but has serious bite and adds amazing flavor to the sandwich.

While there’s a lot to see, some of the best bits are hidden inside. The pickled purple cabbage has good crunch and a nice sour tang, complemented by some unexpected but welcome capers. There’s a good helping of hummus, which doesn’t overpower but adds a great texture to the sandwich and plays well with the lacing of cool, creamy tahini. The pita bread is soft and thin, but with enough substance to keep it from getting soggy.

Surprisingly, the falafel balls aren’t the focus here. They’re well done—small, with a nice crunch that melts into a soft, chewy center—but they aren’t the star of the sandwich.

It’s a stellar offering but a total mess to eat, which makes it especially well-suited to counter-style seating. And with everyone facing the same direction, you don’t have to worry about getting clocked with a faceful of hot sauce.

Service is quick and attentive, and the menu is in both English and Japanese. Sure, you might need a smartphone to help you find it, but Kuumba du Falafel is well worth the effort.