Monami Ohno dreamed of being an animator. Like so many other teenagers, the masterpiece anime Neon Genesis Evangelion changed her life. Ever since watching it, she dreamed of joining the team that made Evangelion at Tatsunoko Productions. She focused on her art and doing what she could to achieve these dreams, enrolling as a student at Osaka University of Arts.

For a stop-motion animation homework assignment, Ohno decided to use cardboard as a material in order to save money. She took discarded cardboard, cut it up with scissors and pieced it together to create the materials for her project. At first, she didn’t think anything of it. 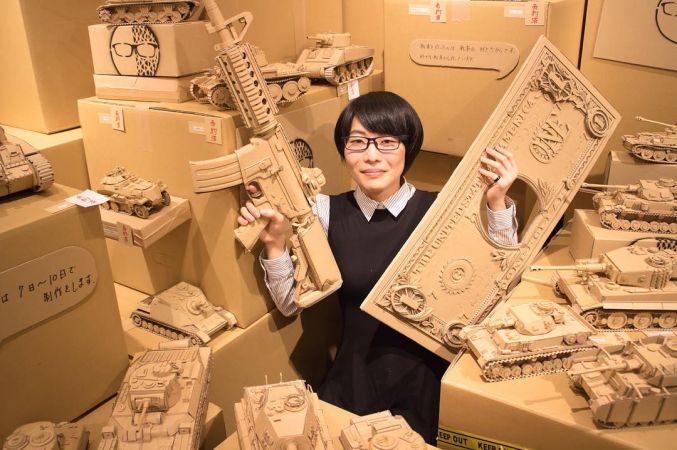 “When I made my animations, I received a lot of praise from people for the cardboard models instead of the animation,” Ohno says. “So I started to think that maybe it was best to focus on the creations themselves.”

I’ve begun to see many contradictions in it.

Flash forward 10 years later, and Ohno is still making cardboard models. She’s made hundreds and hundreds of them — these elaborate, fantastically detailed cardboard statues that remain unpainted and unadorned. Looking at her work, it’s almost as if all the excess cardboard in the world had a hidden heart, and came to life in Ohno’s studio.

At first, she had to stay small. Cardboard is a fragile, flimsy material. But over the years, her work has grown up and up, reinforced with sturdy wooden or Styrofoam interiors. She’s made cars, tanks, trucks, guns, shoes, robots, turtles, spaceships, saxophones, soccer gear, chocolate bars, guitars — anything you can imagine. Each creation is rendered in extensive detail to mimic the original with scales, textures and shadows that are indented, carved, crimped and cut into the same brown, ordinary cardboard.

“I grow more attached to cardboard the more I use it,” Ohno says. “Its cuteness, its fragility. I’ve begun to see many contradictions in it.”

Ohno is quiet and polite, with a short haircut and a thoughtful personality. She readily admits she wasn’t comfortable promoting her work on social media at first. But her passion for cardboard art comes through, as does her love and fascination with all things pop culture.

Nowadays, cardboard is the material for Amazon packages. When you take out the object inside, it becomes trash.

A Charizard billowing out a Fire Blast. A Laputian Robot from Castle in the Sky, nuts and bolts in its oversized arms included. A Lego Joker with skulls etched into his mini cardboard tie. The Millennium Falcon. Classic cars and watches. Even a full-sized, wearable sailor school uniform. A large majority of Ohno’s creations come from some corner of pop culture, whether it’s movies, TV shows, video games or any other sort of hobbyist obsession. Ohno’s love for these pop culture franchises come through in the intimacy of her works’ details, although she herself has too many pop-culture interests to count. 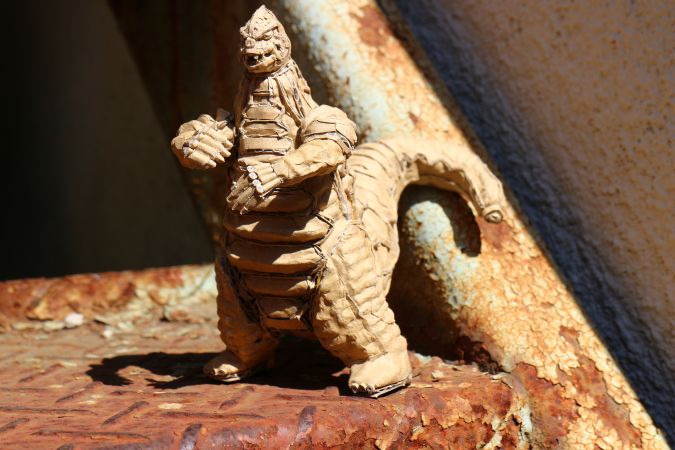 “I usually choose items from my own interests,” Ohno says. “If I don’t like something, it’s hard to get the project done. But I do get commissions, so I can’t always just make the things that I like. I try to challenge myself to make all sorts of things, even projects that I’m not at first interested in.”

Ohno moved away from animation into her world of cardboard during college, and it has been the majority of her work ever since. Being an artist in Japan is as ruthless as it is in any other country, so she’s made ends meet with a variety of part-time work, at first in the service industry, but pivoting over the years into companies that produce models for businesses, and other work more closely related to her main focus. Still, she focuses on cardboard above all else, taking on requests from clients in Japan and all over the world. She slowly built up her platform over the years, rising to over 22,000 followers on Instagram, 12,000 on Twitter, and 7,000 on Facebook.

Her creation process begins with choosing what she wants to make and its size. From there, she begins cutting the cardboard and using adhesive to piece her 3D puzzles together. The process is as simple as that on the surface. But with the degree of intricacy that goes into a jumbo-sized Godzilla with a fully-textured body of scales, it’s hard to even imagine where she begins. 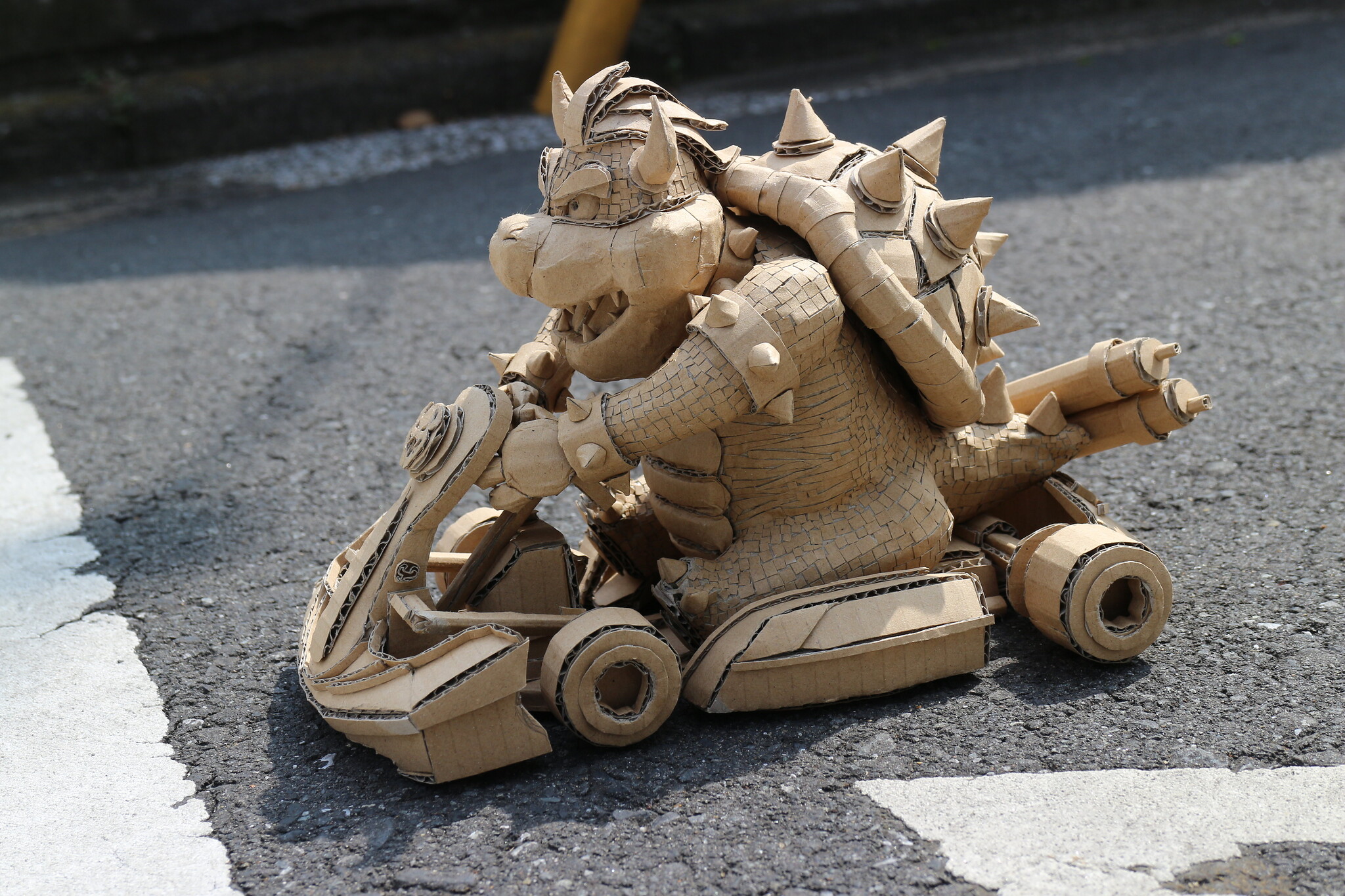 “At first, making objects in 3D was very difficult,” says Ohno, “so I made flatter projects. I focused mainly on rectangular projects, but now I’ve gradually become able to make more rounded designs. I’ve also become able to make bigger sizes — at first, I could hardly make my works bigger than [a fist], but now I can make things much larger than that.”

“Nowadays, cardboard is the material for Amazon packages. When you take out the object inside, it becomes trash,” says Ohno. “But now I feel like, why is this considered trash? It’s not trash — it’s much more interesting to turn this into something with value.”

I started doing this as fan art, but now that I’m a pro, I can’t quite differentiate the two.

Other artists might peel off to experiment with new materials, but Ohno’s love for cardboard is just as devoted as her love for Marvel and Pokémon. And with each passing year, she discovers a new appeal. Lately, Ohno has started to feel more connected to the causes associated with recyclable art movements, which she admits she didn’t even consider at first. 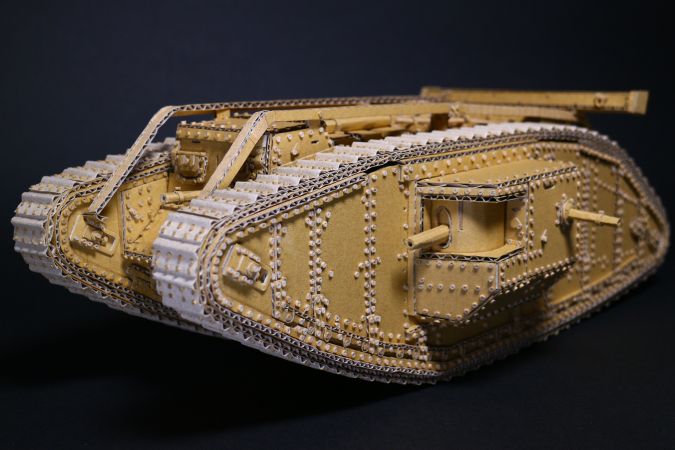 “Back in the day, you had one object and you kept using it — that was the way of life. But now we buy and throw away. My interests might change at any time, but right now, I’m hooked on cardboard.”

Ohno’s new elements of her approach also filter over into her material. Lately, she’s become more interested in trying to build architecture and human bodies with cardboard — two areas that she has never tried before. While a part of her will always stick to her guns — cardboard and beloved pop culture — Ohno expresses a steady determination to keep growing.

“I started doing this as fan art, but now that I’m a pro, I can’t quite differentiate the two,” says Ohno. “Doing fan art for fun was good, but it didn’t lead to enough growth. I thought it was better to try hard to make a lot of projects and take on risks and challenges.”

“I keep both sides: a fan at heart but a professional approach. If I don’t take my work seriously, I won’t like it, because that means I didn’t give it my all.”

Ohno has been surprised at how far her work has spread. Due to the copyrighted nature of much of the material, most of her commissions are to make the object, rather than to sell it. And the coronavirus has provided a surprising challenge, cutting off a large number of commissions that had previously been a steady source of Ohno’s income. 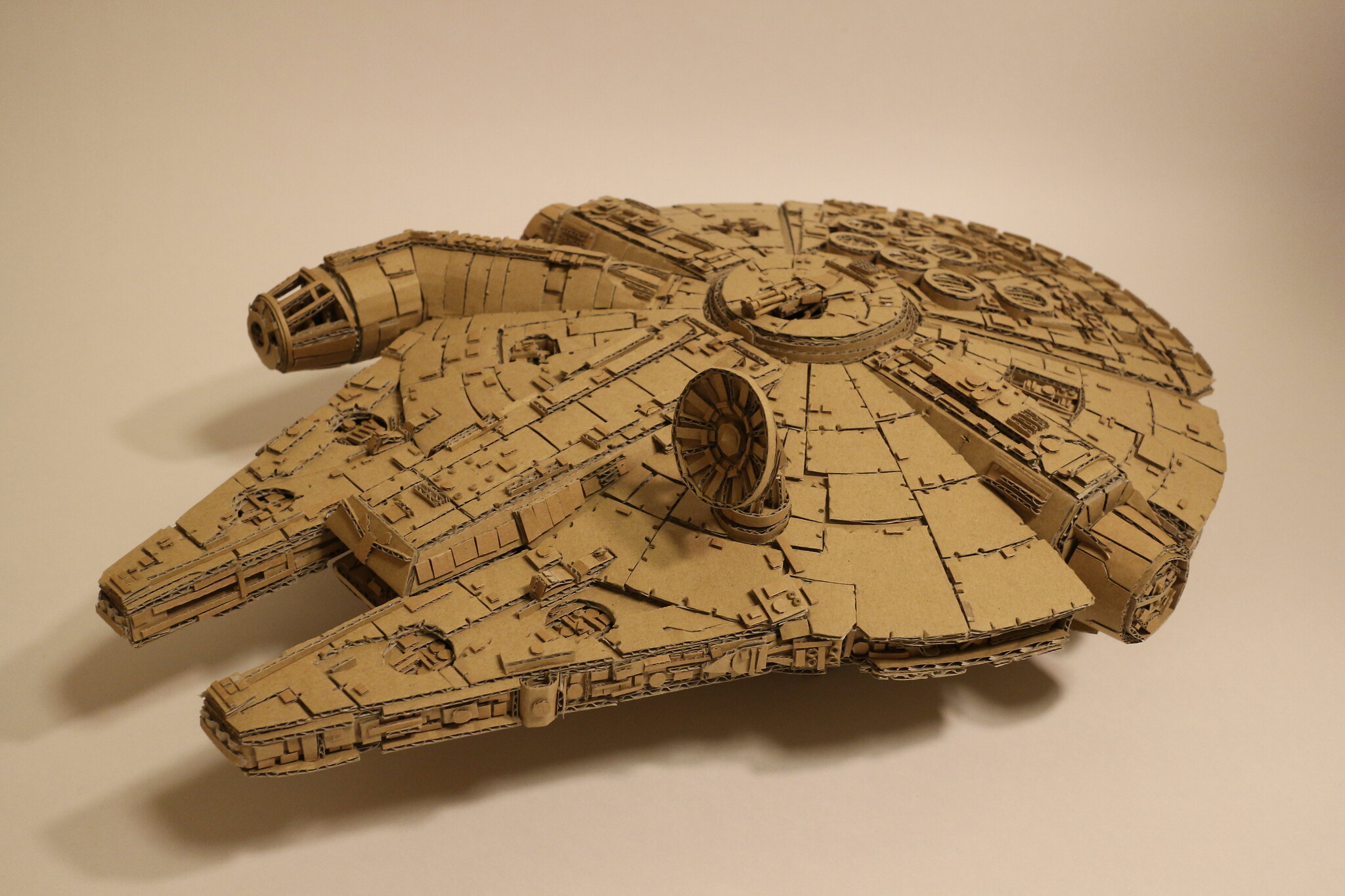 Plenty of artists have gone viral with their fan art, but Ohno has made a whole career out of it. COVID-19 and internet comments have become taxing challenges (she tries not to look at comments), but 10 years into her cardboard creations, her enthusiasm and determination make it sound like this is only the beginning.

“I don’t want to give up because of the small things,” Ohno says. It’s a noble approach to pursuing a creative passion, and it comes through in the steampunk precision — equal parts magic and engineering — of her nerdy, spunky, cardboard world.