Every year, the Brand Research Institute of Japan ranks the attractiveness of each of the country’s 47 prefectures. And, for the past three years, Ibaraki has been listed as the most unappealing. Located just an hour away from Tokyo by train, the prefecture is best-known for its melon farming and energy production. But there’s far more to this overlooked enclave than meets the eye.

Although most of Ibaraki comprises flat plains and lakes, its mountains in the north give way to the breathtaking Fukuroda Falls, considered one of the three most beautiful waterfalls in Japan. The cascading water is a marvel in all seasons, particularly in autumn, when it’s framed with red and orange leaves. 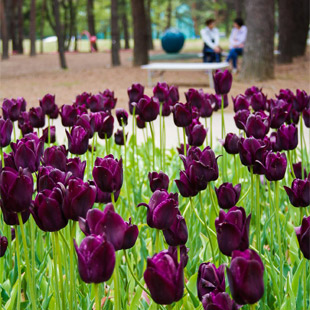 The north is also home to Honshu’s longest suspension bridge, built over the Ryujin Dam in Okukuji Natural Park. The bridge hangs 100 meters above the valley floor and extends for 446 meters.

An hour’s drive south of the falls is the Hitachi Seaside Park. The 1.9-square-kilometer park is a floral paradise of seasonal gardens. From April to late May, 4.5 million nemophila—or baby blue eye—flowers bloom on Miharashi no Oka Hill, atop which you can enjoy panoramic views of the surrounding park and Pacific Ocean. The park is also famous for its kaleidoscopic tulip garden, which contains a replica of a Dutch windmill. The park, built around West Lake, also has an exhibition of traditional Japanese countryside homes, a small amusement park with a giant flower-ring ferris wheel, and a BMX course.

In the west of Ibaraki is the formidable Mt. Tsukuba, with two peaks that respectively tower 870-plus meters high. In the center of the two is a viewing spot that can be accessed by ropeway and cable car, which offers an incredible view of the Kanto Plain and, on a clear day, Tokyo Skytree and Mount Fuji. Mt. Tsukuba is home to over 1,000 plant varieties. 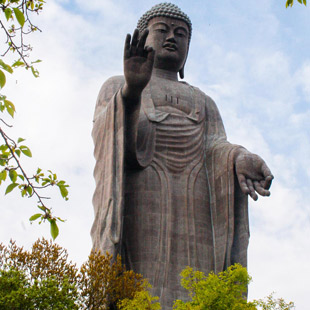 The mountain gives its name to a city in the south that is the location of a giant science complex, Tsukuba Science City, where over 220,000 foreign researchers and their families reside. Inside the complex, the Tsukuba Expo Center houses one of the world’s largest planetariums.

Also in the south is the Ushiku Daibutsu, which stands at an unbelievable height of 120 meters. Certified by the Guinness Book of World Records as the Tallest Buddha Figure in the World, the bronze statue towers over the flower gardens and koi ponds below, with a view comparable to that from a 38-storey building. The Daibutsu depicts a Amitabha Buddha and was built to celebrate the birth of Shinran, the founder of the Jodo Shinshu school of Buddhism.

With natural and cultural sites from north to south, Ibaraki is definitely worth a visit—if only just for a day!

Regular trains run between stations in Tokyo and Ibaraki. The Hitachi Line from Tokyo Station to Mito Station takes around one hour.