Spend more than a few seconds in one of Tokyo’s infinite convenience stores, and you’re bound to hear American music—with a different twist. The Fifth Dimension’s “Up, Up and Away” and Dionne Warwick’s “Do You Know the Way to San Jose?”—already tame tunes to begin with—are rendered into cloyingly sweet adaptations of their former selves, their vocal tracks replaced by a peppy clarinet or an optimistic flute. But here’s the strange thing: the songs aren’t from Japan, yet hearing them like this feels unmistakably Japanese.

This is just one example of what might be one of the country’s largest imports: reimagined “American Cool.” Reasons for this extend back centuries to historical events like aggressive Western trade deals and American occupation, but it’s also the result of local interest. Yuko Yamaguchi, one of the designers of Hello Kitty, says in a 2009 article in Foreign Policy that up until the last few decades, “it was very rare for Japanese people to go abroad, so people yearned for products with English associations.”

It’s certainly not the case anymore. Scads of young Japanese are heading abroad to study, work, or simply travel and experience other cultures firsthand. Now, instead of having to rely on third-party intel on phenomena like American Cool, they can make their own interpretation and bring that idea back with them to Japan. 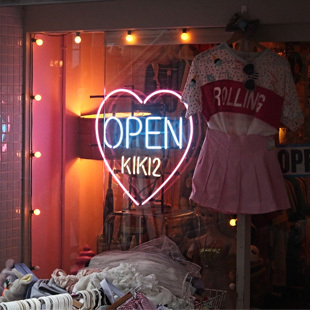 This has influenced Japanese art and culture in plenty of ways, but its effect on fashion has been particularly interesting. More than simply importing ideas, Japanese travelers can fill their suitcases with the goods themselves and, if they’re feeling enterprising, sell them back home at a decent markup.

If you’re looking for proof, head to Koenji Station. The nearby covered arcade of Pal Street, its southern extension Look Street, and their various offshoots boast over 70 vintage shops. While some carry a little bit of everything, others are geared to a much more niche clientele. For example, the pastel slumber party of Kiki2 or self-described “’90s hip-hop shop” Crooklyn. Combined, they’re likely selling all the necessary ingredients to pull off practically any ensemble.

For a Westerner, it can be pretty interesting to see what’s made it to the racks. For example, sweats emblazoned with the logos of unknown, small-town American sports teams or American flag polo shirts that might get clocked as gaudy at a Fourth of July barbecue can be found in the vintage shops of Koenji at premium prices.

While it might be tempting to question this, it’s certainly not a phenomenon unique to Tokyo. Vintage shops throughout the rest of the world are stocked with strange collections of clothes that might wallow in the bargain bins of their native land but become hot commodities elsewhere. 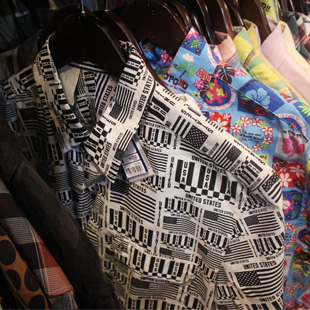 Though Tokyo, along with the rest of Japan, often gets accused of having a more-than-friends crush on Western culture, it’s certainly not one-sided. You certainly don’t have to travel to Japan to find a sushi restaurant, pick up some manga, or get your karaoke fix—to say nothing of the plethora of frequently questionable kanji tattoos gracing arms, necks, and ankles the world over.

More importantly, the Tokyoites who seek out American fashion at shops like those found throughout the city, including those south of Koenji Station, aren’t necessarily looking to replicate American looks. Air Jordans, Penn State pins, and Hawaiian shirts get remixed with other national and international apparel to become a look that’s somehow distinctly Tokyo. Well, as distinctly “Tokyo” as anything can be in an increasingly globalized world. 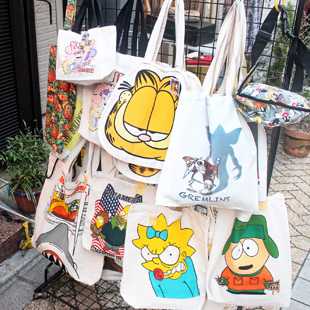 Shopping for vintage clothing is a bit like buying the myth of another person, time, or place. It’s a complicated intimacy that can quickly turn problematic. Culture sharing is a tricky issue, and Japan is no stranger to cross-cultural exchanges that verged on appropriation. The exoticism of American goods is definitely a selling point in imported vintage clothing, but it doesn’t feel like the U.S. is getting played. First of all, Western culture isn’t an underdog, and isn’t being sold for parts against its will. In fact, it’s more likely recognized as a compliment. Apart from this, decontextualizing vintage fashion from the U.S. and using it to tell an alternative local story feels subversive—a bit punk, really. It hardly matters that these clothes might be covered in English or slathered in stars and stripes. They’re easily made over into something local.

Western wear on Tokyo streets achieves something it never could in its “natural” habitat. In fact, Tokyo’s fashion-forward culture just might be tailor-made for imported vintage fashion. Few other cities are so adept at combining traditional and modern, truth and fiction, and the forgotten with the unforgettable.

Part collage, part kaleidoscope, but all visual, Tokyo expertly shrugs off interpretation while continuing to expand upon its own definition. That’s part of its style. It makes sense, then, that its vintage scene would follow suit.