When I reached out to Grand Hyatt Tokyo to do a feature on their executive chef and upcoming “Home for the Holidays” program, I honestly had no idea what I was getting myself into. I’ve been lucky enough in the past to see the inner workings of Michelin star restaurants, but nothing comes close to what I witnessed while shadowing Executive Chef Andreas Fuchs for a few hours. 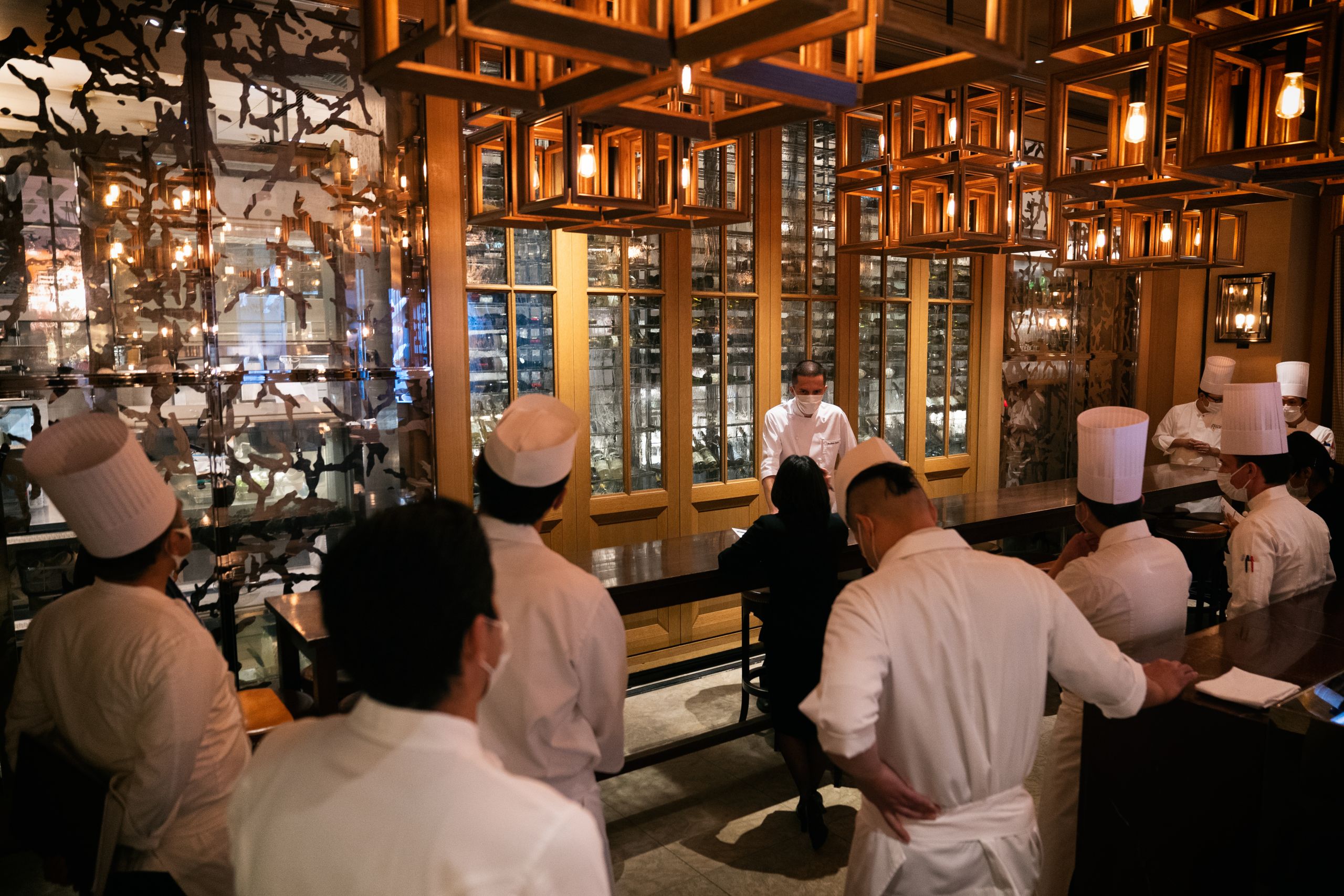 With schedules chock-full and hundreds of staff members, information is passed up an down the chain through meetings with executive and head chefs.

My voyage begins as a fly on the wall during the head chef’s morning meeting. The chefs stand in a circle under the moody lights of one of the hotel’s bars, announcing what’s on each restaurant’s dockets for the day. As each chef finishes going over their notes, Chef Fuchs gives a slight nod of approval, motions for the next chef to speak and occasionally asks a question or two. Without even listening to the words spoken, you can figure out everything you need to know about Fuchs’ leadership just from everyone’s body language: he has complete faith in his team. 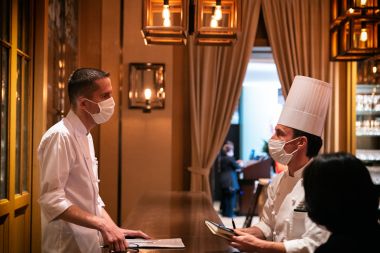 In a 2017 interview with delicious Japan, Fuchs was asked what his role as an executive chef is. He replied, “I give guidance on what should or could be incorporated into the menus. I work together with each restaurant’s chef de cuisine to come up with new ideas, promotions and make sure they stay true to the restaurant’s concept.”

I’m sure he was just being humble as it’s probably not even a quarter of everything he does. I would even go so far as to say that the title executive chef is a complete disservice to him. Fuchs’ role is more akin to being a captain of a ship; managing resources and crews, allocating tasks and charting courses for 10 restaurants and bars, 16 event venues and 180 chefs, all while staying afloat, monetarily speaking.

“The difficult thing is to keep everything connected,”’ says Fuchs. “You might be able to create a nice dish, but if you have no one telling the customers that you have it, it doesn’t matter. That’s where marketing comes in. You also can’t get the food on the plate if you don’t have the products, so you have to work closely with purchasing. You then need to connect them with your suppliers.

“Keeping everything connected takes a lot of communicating and accepting others’ viewpoints, especially with chefs. It’s what I spend the most time on.” 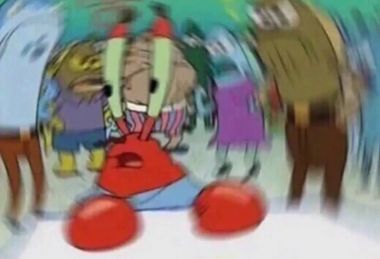 Once the meeting concludes, Fuchs leads me behind the counter, into the staff area. Up until this point, I have only seen what anyone else might experience while visiting Grand Hyatt Tokyo, modern open architecture, calm vibes and the signature maroon accent color adorning various surfaces. It was a completely different atmosphere once we crossed the threshold: no windows, plain walls destitute of personality and organized chaos everywhere. I felt as if I was the living personification of the confused Mr. Krabs meme. Now, I’m not saying it was unsanitary by any means — in fact, according to Grand Hyatt Tokyo, they were the first hotel in Japan to be certified by the International Organization of Standardization under their highest food safety management guidelines. It’s just that everyone and everything here had a purpose, and that was to get the job done.

“I come here every day and I look at the [Mori] tower and just think how great it is to work here,” says Fuchs. “The challenges, developing menus and new ideas, it’s the whole package. I come here in the morning, and I honestly can’t wait to get things done.”

As we make our way through the labyrinthian inner workings of the hotel to Chef’s office, we pass chefs hastily hauling anything you can imagine from whole beef tenderloins to boxes of assorted veggies, to the various kitchens in the building. We then enter a doorway into a typical office space where staff members type away at their desk, pausing briefly to greet us. Occupying a corner of the room, Fuchs’ office awaits, adorned with mementos of past events and a single, unassuming plastic-wrapped muffin sits, patiently waiting. 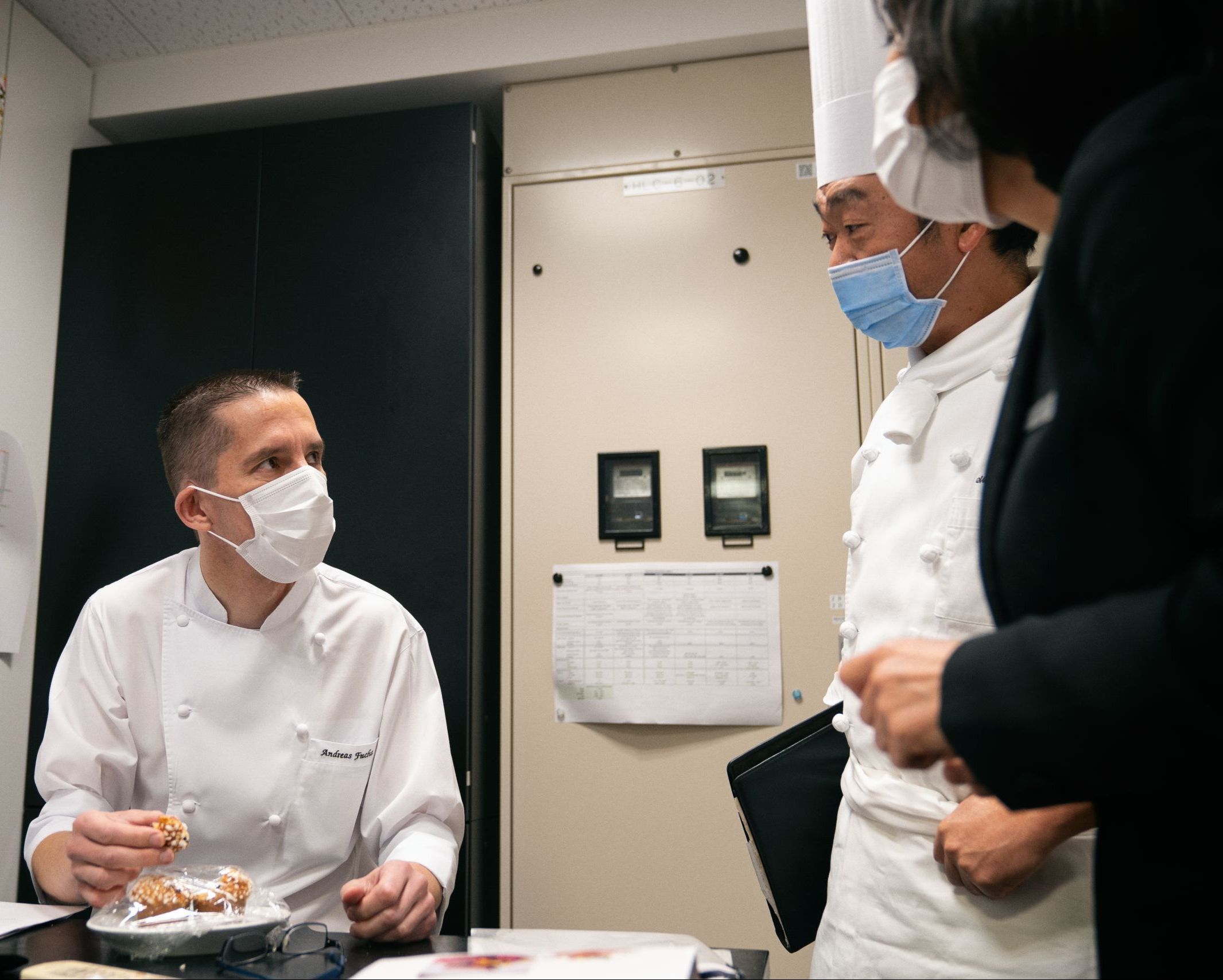 Chef Fuchs begins to put on his apron just as the head baker peaks into his office to let him know the muffin is an upcoming seasonal item. As he takes a bite, the baker lets him know it’s the same one from last season. “Oh, in that case it’s good,” says Fuchs without pause and hands the muffin back to the chef.

“One of the great things about working here at Grand Hyatt is that I can depend on my team,” says Fuchs. “We don’t need to find the best chefs because we can teach them what they need to know and send them to the proper training. It allows us to build an amazingly talented team who can do so much. Our head pastry chefs have worked here since the hotel opened in 2003. I know I don’t need to worry about them, so it makes it easy.” 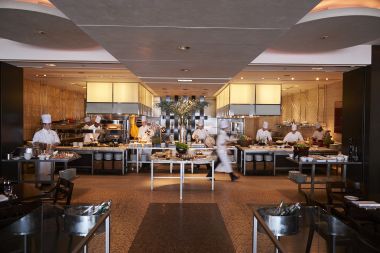 Leaving the office, we take an elevator to the loading dock, at this point I’ve lost all bearing of where I am. Surrounded by boxes of goods — marked with letter codes like those in an airport to define each restaurant — I can’t begin to ponder how difficult it is just for one restaurant to manage ordering and tracking ingredients, let alone multiple — each with significantly different cuisines — in one building.

“We have a very big purchasing team, so suppliers know us. When there are new suppliers or farms, they already know Grand Hyatt and what we are about,” says Fuchs. “So, it’s actually not that difficult. As a standalone restaurant, you must go to the markets and see what’s new for yourself. But with such a big hotel behind you, people come to you, which lets you plan for the next month and even the next year.”

The next stop in the walkthrough leads us to what I believe heaven must smell like. As we pass a pastry chef decorating a wedding cake and two others meticulously decorating cookies with intricate designs, Chef Fuchs casually mentions that they have 12 weddings to conduct this weekend, but at that time I was already lost in the sauce, completely enamored by what was in front of us. The room opened into the main bakery, where empty counter space was nonexistent. Chefs and bakers were everywhere you looked, either mixing, filling molds, manning ovens, stirring pots or moving items from one station to the next. 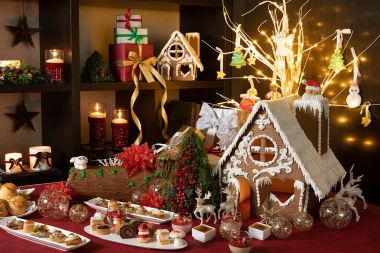 We pass by the mold for the gingerbread house that’s a part of the hotel’s “Home for the Holidays” program, and it gets me thinking, how do you even start to prepare for a program like this?

“You basically start planning January 2nd, for the next festive season,” says Fuchs. “This year marketing came to us and said, ‘what do you think, this year let’s go ‘home for the holidays,’ at that point we must think what we can do for people who can’t travel outside of Japan. I think that’s why we felt it was important to focus back on those classics.”

“It’s not about creating new dishes, but sometimes more about what do people want? A lot of the products are ones you wouldn’t expect necessarily but would be happy to enjoy over Christmas. So, I try to get my ideas from that point of view.”

As I grudgingly follow Chef Fuchs out of the bakery and we start to visit each restaurant and kitchen, I’m completely overwhelmed by the thought of being in Chef Fuchs’ shoes. So many things and people to remember. Budgets and goals to meet. Menus to develop. Different problems to solve every day. The list never ends and is always unpredictable. The only actually predictable thing is the Chef himself. 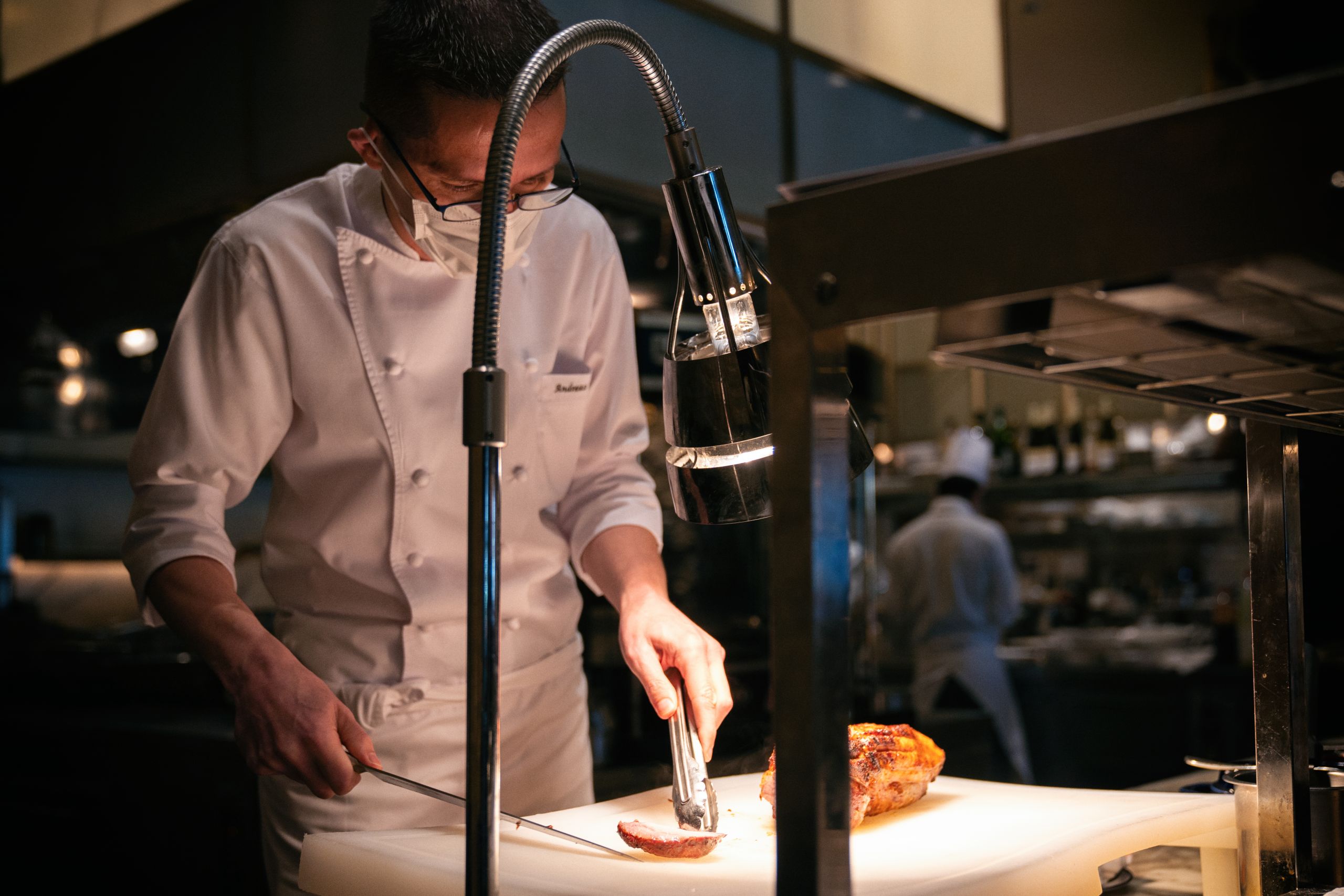 Chef Andreas stop by The French Kitchen to ensure everything is up to par before lunch service.

On our trip throughout the hotel, he maintains the same calm, reassuring demeanor, greets every staff member we pass and drops facts about what he and his team accomplish, as if he gets a kick out of making my draw drop. From the constant walking from restaurant to restaurant through the myriad of narrow walkways and stairs, Chef happily mentions he averages over 15k steps every day and that it keeps him active. 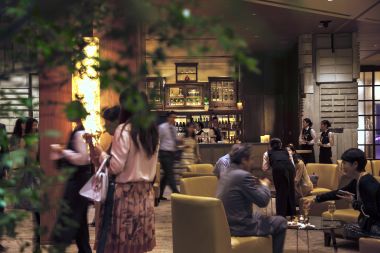 “This place is never ending. It never stops,” says Fuchs. “You might come in one day thinking ‘oh it will be a quiet day,’ nope! There’s always something happening. People might think I’m still cooking, but as an executive chef over seven restaurants, three bars, event venues and a grand club, there’s no more time and no need.”

“Over the years I have learned, so now I just need to walk in, and I see what’s right, what’s wrong and what doesn’t taste good. I have this fantastic team that I can communicate the problems with, and they fix it. It’s great.”

Once the tour concludes, Chef Fuchs walks me through the lively lobby filled with mothers and kids taking photos of the holiday display and we make our way through the front doors. Before saying my goodbyes, I crank my neck up to look up at the hotel and the towering Mori Tower behind it. Still dumbfounded about the amount of people and work that it takes to keep this hotel running, I tell Chef I don’t know how you do it every day.

“Grand Hyatt Tokyo is what we call a ‘lifestyle destination’ that not only offers a place to dine and stay, but our location as part of the Roppongi Hills complex connects us to unique experiences. For example, during the holidays, there are the illuminations on Keyakizaka street and the popular German Christmas market,” says Fuchs. “I think it’s unique to this hotel, things are always changing. It still seems fresh after six years, and I have never stayed this long in one place. I love what I’m doing here, and I have no plans of leaving.” 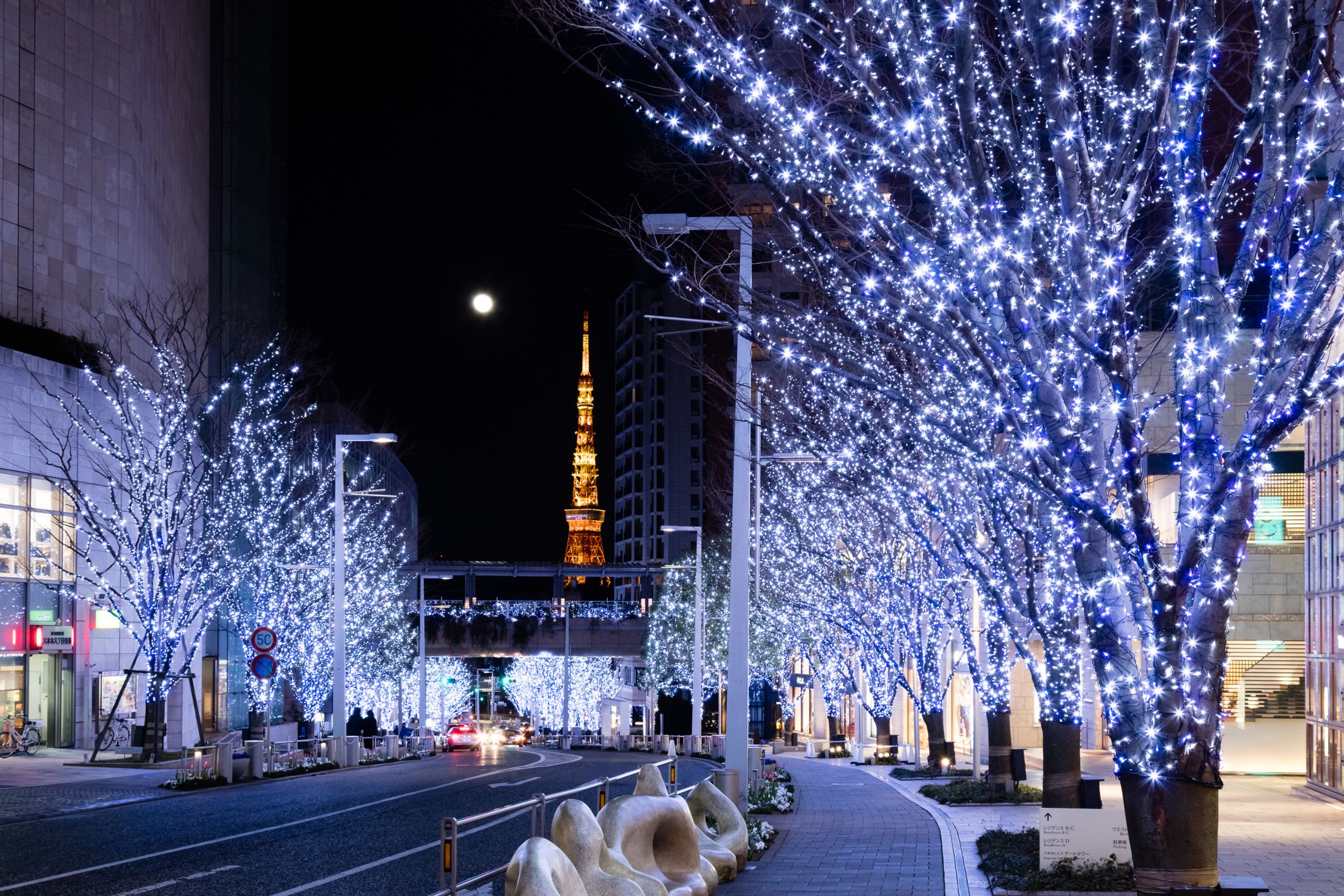