Comic book totem poles, an homage to Philip Guston and a general influence from the Pop art movement—Rob Judges is an artist steeped in contemporary urban art, while still acknowledging the artists who came before him.

A native of Toronto, Judges has been living in Tokyo for nearly 18 years and has had several solo and collective exhibitions in the capital. Also an accomplished DJ, with an encyclopedic knowledge of music, Judges’ work is inspired by life in Tokyo and features humor and a touch of irreverence. Over the past decade, Judges has experimented with pop art totem poles, cartoonish KKK hoods appropriated from painter Philip Guston, and contemporary twists on pop artists such as James Rosenquist and Roy Lichtenstein.

Despite his Tokyo tenure, Judges has plans to return to his native Canada in the coming months. His final solo show in the city, “Tokyo 1999,” at the Wieden+Kennedy-owned W+K+ Gallery in Nakameguro, is a sayonara to the city he’s called home for nearly two decades.

“Tokyo 1999” contains 16 new works based on Judges years in late 90s Toronto, where he lived in the city’s Chinatown and become enamored with the district. He describes the area as “more electric and colorful than the rest of Toronto.” His early paintings from the late 90s include neon kanji signage. Unable to copy real kanji characters at the time, Judges invented his own language and these new works are a humorous riff on these early days as an artist. 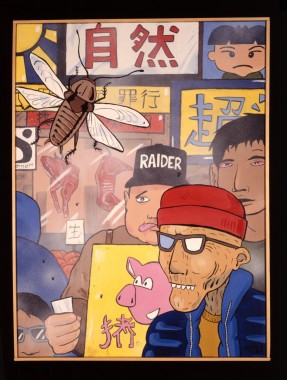 For this collection he resisted using the internet as a visual reference in an attempt to return to the pre-internet days of the 90s. The depiction of a cockroach, for example, is more imaginary than authentic—plucked from Judges’ imagination rather than copied from a website. The charismatic Canadian expanded his artistic universe after moving to Japan at the beginning of the century. The neon aesthetic and electricity of Tokyo he found here still has a commanding influence on his work.

Judges has experienced ups and downs as a foreign artist in Japan. He admits that sometimes Japanese gallery owners failed to understand the obvious humor in his work and, on occasions, he has been asked to change his paintings for Japanese audiences. He has also experienced censorship issues as well—a reality that may startle younger and more inexperienced foreign artists in the country.

Judges’ paintings have taken on many faces during his time in Tokyo. An important figure and artist, his oeuvre reflects the changing face of the city over nearly 20 years and, in turn, his own journey from a naive twenty-something to a more mature and accomplished adult at the peak of his career.

Rob Judges’s work will also show as part of a group exhibition, “Hang Time,” at THE blank GALLERY in Harajuku from April 27 – May 13.