Rugby’s coming home? Well, not quite. With evidence suggesting the history of Yokohama Country & Athletics Club (YC&AC Rugby Club) stretches back to 1866, that gives the host nation of the 2019 Rugby World Cup a solid claim to being one of the earliest purveyors of the game outside of the British Isles and Australia. Why then, with such a deep-rooted history, does the game lag behind in popularity compared with other imports such as baseball and soccer?

Well, grass for one thing. Grassy areas that people can actually set foot on in Tokyo are hard enough to come by — never mind grass that athletes are allowed to scuff up. Unlike many other sports where concrete is an acceptable substitute for playing on (basketball, soccer, tennis etc.), bringing down someone onto that surface would make even the hardest players of rugby wince. “I’m always concerned with finding places where the children can practice safely and without worry,” says Hiroko Higuchi, who, after 15 years of involvement with Ageo Rugby School became its president/leader earlier this year after obtaining referee and mini rugby instructor licenses.

The school exemplifies the challenges that face many clubs at a junior level. Consisting of around 100 members divided into three age groups (under 8, 9-10 year olds and 11-12 year olds), they operate rather nomadically — one of the practice grounds is a patch of not-particularly-well-maintained, rough grassland, charitably loaned out to them by the owners of the nearby factory on whose land it occupies. There is a strong community spirit to the set-up though, with everyone chipping in not just financially but also in dividing up various responsibilities such as equipment storage etc. 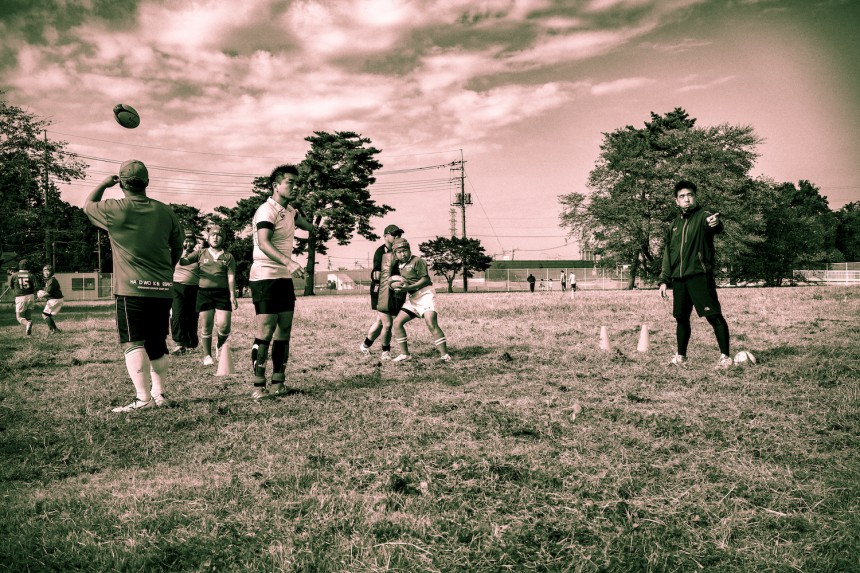 There is also a shared sense between everyone that playing rugby should first and foremost be about having fun. “Ageo Rugby School’s policy is to enjoy playing rugby, not to win at any cost,” says the club’s 12-year-old captain, Haruki Tanaka. “Practice is not too strict, and we can enjoy playing games together as a group … also, regardless of size or shape or strength, rugby offers everyone a chance to play.” This contrasts with the more common baseball and soccer clubs which can often be more serious and demanding on club members; the broader competition makes the odds of becoming a successful professional player that much harder.

Ageo Rugby School was founded in 1995, around the same time as many other Japanese mini league teams during what was a bit of a boom time for the game. As well as the declaration by the IRB (International Rugby Board) to make rugby union a professional game in 1995, it was also the year in which the Rugby World Cup was held in South Africa; back on the world stage after years of international exile due to its apartheid regime. Images of the newly elected South African president Nelson Mandela sporting the national team’s Springbok jersey was a strong image of reconciliation for the nation and gave the sport global attention. Unfortunately for Japan they got spanked a record 145-17 by the New Zealand All Blacks during that tournament, but their position as hardworking underdogs endeared the team to a lot of fans. 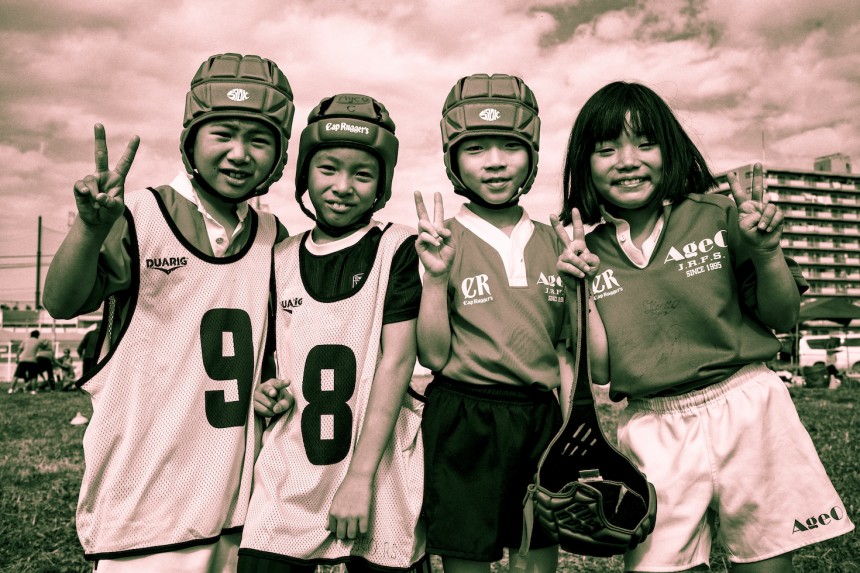 Many of the kids involved in Ageo Rugby School cite watching Japan during the 2015 Rugby World Cup — who caused arguably the biggest upset in the sport’s history by beating South Africa 34-32 — as one of the reasons for wanting to take up the sport. Tanaka remembers watching Japan for the first time and being immediately hooked. “When I saw the Brave Blossoms, I noticed they were smaller than the players of other countries. But, they tried their best to succeed, and I thought this was very cool. This made me want to start playing rugby.”

Girls are not an uncommon sight amongst many teams (there’s even a term coined for them: ragaru). The first Japanese Women’s Rugby Union was formed in 1988 and, according to Higuchi, the number of girls playing rugby has been increasing over the years. The growth in club teams and the emergence of more girls’ competitions being organized has also led to many girls staying on as club members for much longer. Hoping to do just that is Ageo Rugby School member Rosemary Johnston, 11, who has been offered a place at a special academy for girls run by the all-women rugby club Arukas Kumagaya. “I want to join,” says Johnston. “It will be good because you can learn with other girls and I can keep playing after elementary school … It might be more fun if it’s not mostly boys. Like the Black Ferns [The New Zealand national women’s rugby union team].”

Rugby, however, is not without its dangers. According to a study by BJSM (British Journal of Sports Medicine), youth rugby players incurred 1.5 times more training injuries and 2.7 times more match injuries than soccer players. Both Johnston and Tanaka (and their parents) quickly overcame those initial concerns however. “At first I was scared of contact techniques like tackles,” admits Tanaka. “But after I learnt how to do these techniques correctly and also knew the rules, I understood that rugby is not a scary sport.” 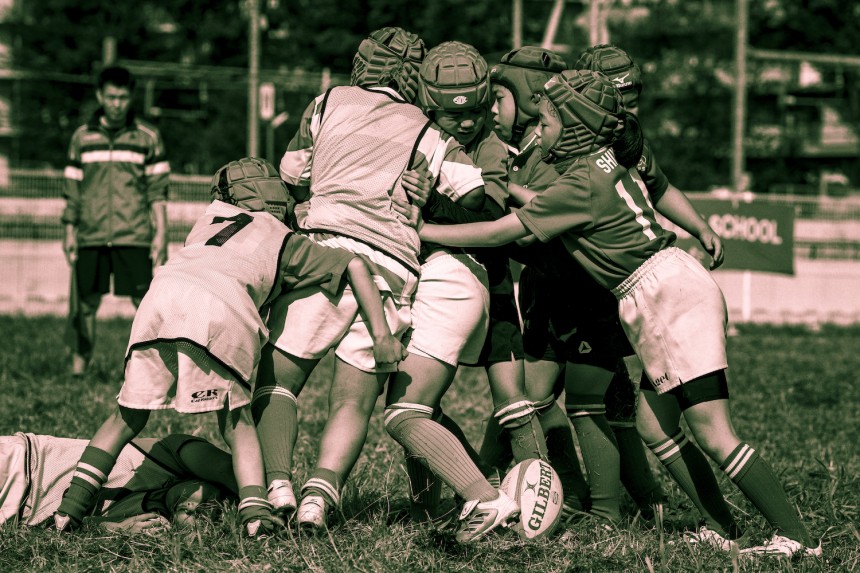 Interest levels in rugby waned in Japan after the 2015 World Cup, as these things often do, but the power of actually hosting a World Cup is raising hopes that things will be different this time. There is a long road ahead though, with a lack of adequately trained coaches and, as Higuchi explains, some deep-rooted obstacles. “When children become junior high school students, they usually join various school clubs and it is difficult to be a member of a school club and a separate sports club” (typically, Japanese junior high schools do not have rugby clubs). She continues, “Because there are only a few junior-high-school-aged children who wish to keep doing rugby, clubs don’t have enough members for them to train effectively and this means clubs must combine for that age group … the number of high schools which have rugby clubs is also decreasing and this contributes to the lowering number of players in these age groups.”

There is a lot of hope and enthusiasm for the future however. “I want to teach children how positive and enjoyable rugby is and my wish is then that these children will continue to play rugby,” says Higuchi. Tanaka too believes the Rugby World Cup will help encourage more people to play and keep playing. “If many people join and our school becomes larger, we can practice more and improve our skills though better and more variety of training. If this happens, we can enjoy rugby even more … I hope in the future it will become as popular as sports like baseball and soccer.” 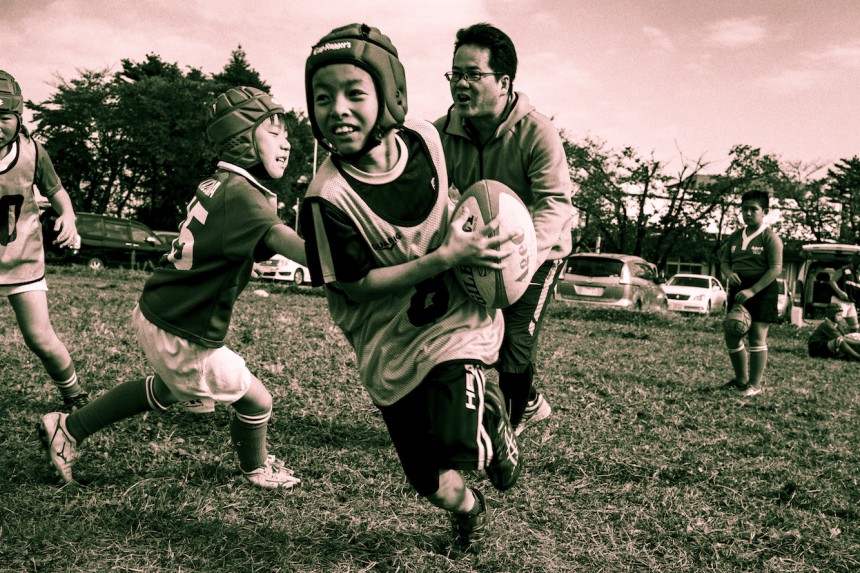 Metropolis would like to thank Dean and Junko Johnston and everyone involved at Ageo Rugby School for their help with this article.