Kimono and yukata designer Shibasaki Rumi on fashion and tradition

However, on closer inspection, the designer’s devotion to the kimono and the tradition it embodies is evident in every last stitch. Metropolis sat down with the designer herself to talk tradition, fashion, and making the kimono part of the global wardrobe.

How do you position yourself in the current kimono scene? 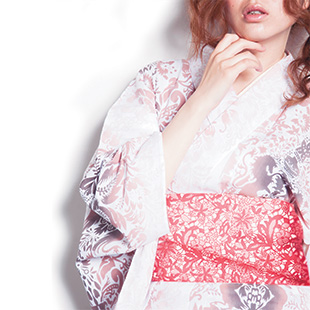 Whether designer, craftsman, shop owner, or fan, everyone’s approach within the world of kimono is slightly different. If I had to pick a stance, it would be to preserve the culture of the Japanese. That is not to say I would advocate any kind of supremacy, only that I ally myself with any people who want to preserve their own respective customs and culture for future generations. Saying that, I am not a traditionalist who would only seek to archive antiquities and treasures of the elite, but rather to combine what was done in the past with what is relevant now.

Beyond that, I believe in the folds of the kimono there is the seed of “something” that transcends the present, so much more than the businesses, the households who have passed down the craft over countless generations, and artists who come together to make it.

Why did you found your own brand?

Before I started working under the name of Rumi Rock in 2005, I was the designer for another brand. I started working in kimono design in 1990, and by 1994 I was an independent yukata label taking on special orders for the likes of Suzuki Keiichi from rock band Moonriders, who also penned the music for the MOTHER series of games. I was making the kind of yukata that were just not available anywhere else on the market, packed with skulls and other darker imagery. I was starting to get a bit of recognition for my work, and eventually Mitsukoshi in Ebisu asked me sell in their department store. It was a completely natural flow of making what I wanted to make and people responding to that. It was actually a friend of mine who works in advertising who came up with the name itself. I was just procrastinating about it, so they stepped in and did it for me!

Looking back, the turning point for me as a designer was in 1991, when I was just starting out. I was always fascinated by the amount of detail crammed into the designs of antique kimono, particularly those from the pre-war period; but the new ones I was designing just didn’t really live up to that. I got fed up and went out to buy a computer—an Apple I believe. I spent ages working alone on digital prints in painstaking detail. Back then I didn’t have all that many customers, so I didn’t think about turning what I was doing into a brand. But that was the moment when I went beyond making designs for yukata, and started making yukata as fashion. All the frustration I had built up until then was suddenly realized in my designs, and I became a designer.

What is the concept for Rumi Rock?

I like to think of what it would have been like if they had had rock music back in the Edo Period, a kind of “Edo meets rock.” In line with that, my designs try and capture not the gentry, but the ordinary people’s taste from Edo. They have a playfulness, a frankness, a sense of the chic, a stance against the powers that be.

I want them to be fun to look at, fun to wear, and they should grab the attention of those around you.

As a Japanese designer, what is the importance of preserving this clothing tradition?

Kimono are connections, the connection between family members as a kimono is passed down through the family; but also, in the item itself, every last stitch of embroidery ties you to another. It is one of the few ways we can feel such a sense of empathy towards others through fashion. People give and receive them. A cotton yukata, once worn out, is recycled into a duster or diaper. A kimono, on the other hand, is unstitched and restitched when washed. This care for the cloth itself is an important tradition we should prize. It is something that every generation needs to be made aware of.

What do you need to do to appeal to young people today?

Young people are the future of my job, so I have no choice but to keep them in mind and make designs that young people will want to wear. In their case, I actually find that looking to the past and taking inspiration from antique designs can be key. But it is also a matter of creating opportunities, events, and places for them to have fun wearing the kimono they might already own.

Saying that, ultimately, if the child’s parents haven’t worn, handled, and stitched kimono, it becomes difficult as there is so much knowledge that has to be passed down.

Which of your designs sums up your approach to fashion? 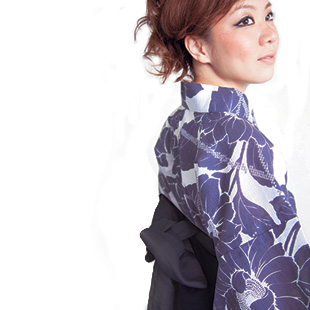 There is one I call “Patriotic Forest,” inspired by the late great Mishima Yukio, that I feel sums up his world view, as well as my own. But maybe the designs I make this year or next will communicate it better.

What has the reaction to your work been like from abroad?

Oddly enough, the designs inspired by non-Japanese folklore have been most popular. My design “The Princess and the Dragon” was inspired by the story of Saint George slaying the dragon, and that has been snapped up by a lot of foreign fans who were surprised to find their own culture represented on a yukata.

What advice do you have for non-Japanese people who want to wear traditional Japanese clothing?

In the case of yukata, most people should be able to find a size that suits their body. So as long as they pick a design they like, they can’t go far wrong.

If they don’t want to go to the trouble of finding geta shoes, I don’t even see a problem with wearing sandals—or Birkenstocks for that matter!

Where does kimono and yukata fit in the current fashion system?

I think the fashion system of making this year’s fashion outdated by the next is completely wrong. In kimono and yukata, we use, recycle, and remake until the very fabric is disintegrating. On top of that, we are not led by anyone as to what is popular—we decide for ourselves.

If you think about the current state of the fashion industry, in particular that of fast fashion, I can’t help but see the labor intensive world of kimono that draws from the legacy of the samurai and Kyoto court as being of true luxury. But what do you think?

Do you think of kimono as “traditional” or “modern”?

That is surely up to the wearer. And whatever way it makes you feel, I am not sure why we care so much.

What is next for you as a designer?

I am preparing to take my brand abroad and am currently thinking how to approach that. I have over 100 designs now, and I would be interested to see what the reaction to them is like abroad.

Wherever you go in the world, everyone has their own country, people, and history. For me, it is that difference which is engaging. I think of yukata and kimono as a base through which to communicate the mood of the moment, whether a current best-selling manga or historically-important tale. On top of that, if we can advance that base through the latest textile development or dyeing technology, then I think we will have made our own contribution to this culture.