We have the technology. We have the capability to make products that are better than they were before. Better … stronger … faster. But do we want to? In the modern world, technology infiltrates every part of our lives, and with it come techniques for mass production that render the craftsmanship of the past a quaint memory in the minds of elders. It may seem convenient—and in fact it may be. But part of what makes Japanese culture special is being lost in the process. Soon, it will be gone forever.

This doesn’t sit well with everyone, and Swiss entrepreneur/filmmaker Michel Bielecki and his startup Swispon aim to turn the tide in favor of tradition with the documentary Heirs of a Forgotten Time. It’s a project born of business that took an unexpected turn toward preservation. 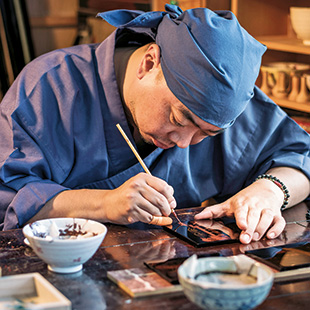 As Bielecki explains to Metropolis, “Initially the idea was that we were just going to help get Japanese products over to Europe and get European products to Japan—traditional crafts and goods being part of it. But after a time we noticed that people are most interested in these craft goods only.”

This realization connected well with Bielecki’s own experiences traveling in Japan, hitchhiking his way from Aomori to Kyushu. Along the way, he met many interesting craftsmen. Upon returning to Switzerland, his quest to order tatami mats online turned out to be difficult, highlighting the problem traditional crafts face in the modern world.

“The only thing I could find was some stuff on Alibaba, some Chinese-produced fakes, and I asked myself ‘What’s the problem here?’ This is where my interest for traditional handicrafts started developing,” explains the filmmaker. “I started researching, and I noticed that these guys don’t have successors, so a lot of them are basically dying out. Every year, we have less and less craftsmen.”

The core problem, as Bielecki sees it, is the lack of communication. “They are fantastic at what they are doing. They’re very dedicated, they’re doing it with their whole heart, but they don’t know how to get it to a broader audience.” 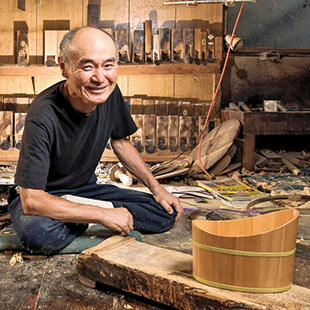 So the Swispon mission shifted from simply bringing Japanese products to the Europe to giving a voice to the talented artisans who create the crafts.

To do this, Bielecki assembled an international team of creatives with a passion for Japan that includes American cinematographer, sound expert, and editor T.C. Deane; fellow American photographer Anthony Wood; and Michelle Basco, an animator, web designer, and editor from the Philippines. Joining them to help with communications and relationship management are Junko Wood and Satoki Kon of Japan.

Together this team is working with five families in Japan and one in Switzerland to tell the story of traditional Japanese crafts, their history, and the process of making them. Connecting with these families, however, wasn’t easy.

“We were trying for months to get the trust of one of the families, and it seemed just impossible because we were young, we were inexperienced, they didn’t know us,” laments Bielecki. Thankfully, fate stepped in and a friend working at the Austrian Embassy in Japan connected Michel with artists from Ishikawa who were in Vienna for a big exhibition. “And thus the first step to building trust was done. Three months later in Davos, where we invited them to join for ‘JAN,’ Switzerland’s biggest Japan convention, they—as the first family—agreed to collaborate with us.”

With the pieces in place, the crew began a seven-day drive across Japan to meet with the artisan families one by one, shooting in detail the process of creating their crafts, as well as interviewing them to preserve the history and knowledge of each family.

The results can be seen in the video they’ve created for the Kickstarter campaign (http://meturl.com/heirskickstarter) that will fund the editing and post-production of the documentary. The flavor may not be quite what you expect, which is Bielecki’s goal.

“We’ve made a trailer that I think is polarizing people a little bit. I’ve heard comments saying that the music is inappropriate, it’s much too dynamic, it’s much too fast. But these comments were mostly coming from older generations, so I was actually happy because this is exactly what I was trying to achieve.” Getting younger people to see traditional crafts as cool is, as Bielecki sees it, the key to preventing the extinction of the art forms and making them relevant to the modern world. It’s all about communication.

To this end, the documentary is but a piece of the puzzle. Swispon has launched a new online platform called ZenPuls (http://zenpuls.com) that is designed to remove the communication barrier between craftsman and client. The service facilitates communication between craftsmen in Japan and clients abroad by providing handcrafted translations of every single message. “People can communicate with the people who are behind the product, can see who is doing it and how it’s done,” Bielecki says. “[Customers are] assured that they have the highest quality and authenticity here, and they can exactly know where it’s from and what it’s about.” The team speaks 10 languages in all, so ZenPuls truly can reach a broad customer base previously inaccessible to the average Japanese craftsman.

Together, ZenPuls and Heirs of a Forgotten Time promise to bring traditional Japanese crafts to a whole new generation worldwide. It’s a fascinating project, and this story has only scratched the surface.

The documentary Kickstarter runs through Tuesday, January 12. Tune in to the Metropolis On Air podcast (http://meturl.com/metonair7) for a deeper look at both the documentary and the ZenPuls platform through our half-hour interview with Bielecki.

The joy of artisanship

The modern take on traditions: simplicity, creativity and functionality

Revisiting the festivities of Japan’s past