A capsule of cool, blissfully uncaring and unpolished, Koenji feels like a town in its own right. Around its busy station and along its multiple shotengai (Japanese shopping streets), lively youth culture brims out of music venues and clothes shops where retro 90s T-shirts and worn denim jackets fill the racks and groups of friends dig for finds.

Koenji exudes an edgy, animated atmosphere. There’s a punk-like mindset that runs parallel to the generations-old neighborhood establishments, grocery stores and coffee houses that continue to tick over alongside their more youthful neighbors. But away from the gritty (at least for Tokyo) backstreets, sleeping to the south of Koenji is Shinkoenji.

This part of the district has its own stop on the Tokyo Metro Marunouchi line that first opened its doors for passengers in 1961. The streets around this station serve up a softer side to the frenetic energy at the center of Koenji.

Along with vintage shops, independent coffee shops and other stylish hang-outs, this placid portion of town is also home to a collection of shrines and temples. In fact, whole clusters of them can be found around the Shinkoenji streets, adding a historical twist to the counterculture this part of Tokyo has become so famous for — an ideal place for a slow stroll on a sunny afternoon. 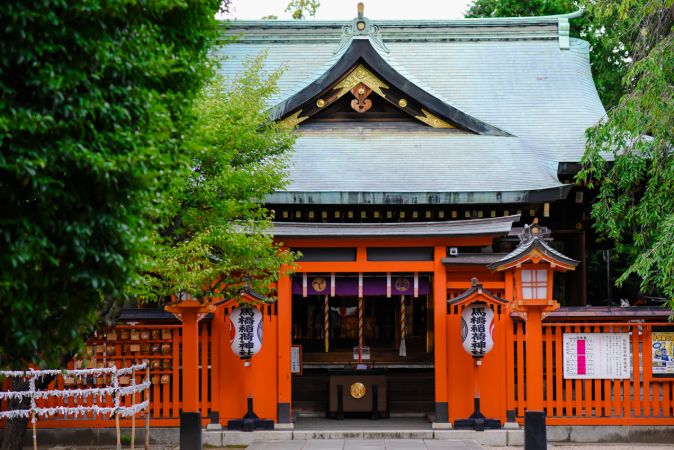 The story of Shinkoenji’s temples reflects the history of Japan’s rapid urbanization and the ever-constant state of flux that is at Tokyo’s modern heart. Although some of the temples and shrines in the area are old — Koenji temple has stood on the same site ever since it was established 1555 — many of them were actually moved to the district at the beginning of the 20th century. The brisk speed of change driven by the demand for housing after the 1923 Great Kanto Earthquake, plus the need for more space in the city center resulted in these large structures being rehomed. Thankfully, the displacement of the old buildings has created a quasi-Kyoto atmosphere, with some of the religious buildings spaced only meters from each other.

Around a seven-minute walk south of Shinkoenji Station is Saihoji Temple. Founded in 1617, the temple was moved in 1920 from its original location, near the north side of what is now Shinjuku Station, due to the expansion of the Chuo Line and the modern development of Shinjuku. The temple saw more upheaval when it was destroyed by fire in May 1945. Despite its tumultuous history, Saihoji is a place of stillness. Its placid graveyard is a space for quiet, composed moments among the hum of the city. It is here that Reiki founder, Mikao Usui (1865–1926), is laid to rest. 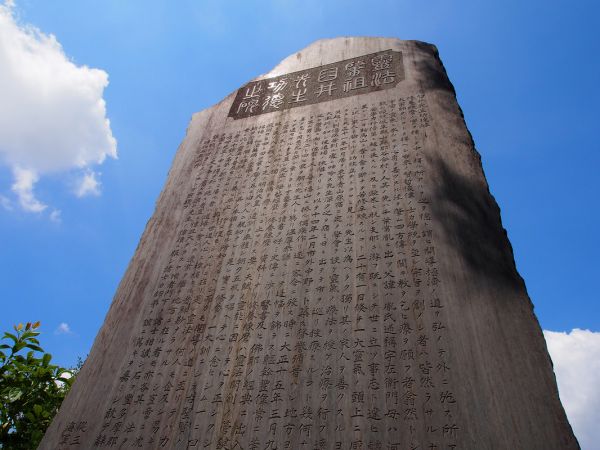 Since Usui established his form of alternative medicine, its use spread throughout the world, but in Japan it was largely forgotten due to spiritual medicine being outlawed during the Allied occupation following World War II. Today, Usui’s grave, overlooked by trees and a large memorial stone, has become a hushed site of respect for followers of his healing practice, with an incense stick or two often curling smoke into the air. Usui’s memorial stone outlines the values in which he taught through his practice of reiki: “Don’t anger; Don’t worry; Be thankful; Work hard; Be kind.”

Just 400 meters along the road from Saihoji is the impressive Myohoji temple. Founded in 1615, the sizable structure and its grounds survived WWII bombing, leaving many historic buildings and artifacts to be later designated Important Cultural Properties. Originally affiliated to Shingon Buddhism, later to Nichiren Buddhism, Myohoji is guarded by unusual iron gates, designed in a blend of Japanese and Western styles. These were designed by the “Father of Japanese modern architecture,” prominent British architect Josiah Conder (1852–1920) who was brought to Japan by the Meiji government to impart his knowledge and skills.

Through the gate, the temple grounds change with the season. June and July bring blooming of hydrangea and irises, while December brings crowds of people for joya no kane: ringing in the New Year with the temple bell, cast in 1725.

Nearby, and also dedicated to Nichiren, is Chozenji temple. This one started life in 1590 in Tokyo’s Yanaka district, and was moved to its current location in 1923 following the earthquake. It’s another particularly pretty spot to visit during summer, when the pond overflows with water lilies in full bloom. Amongst the relaxing grounds, temple-goers can spot numerous elaborate statues and sculptures of various animals, said to be collected by the current priest for the amusement of visitors. The welcoming atmosphere is extended to the local community: Chozenji regularly hosts cultural events and activities such as ikebana (flower-arranging) classes. 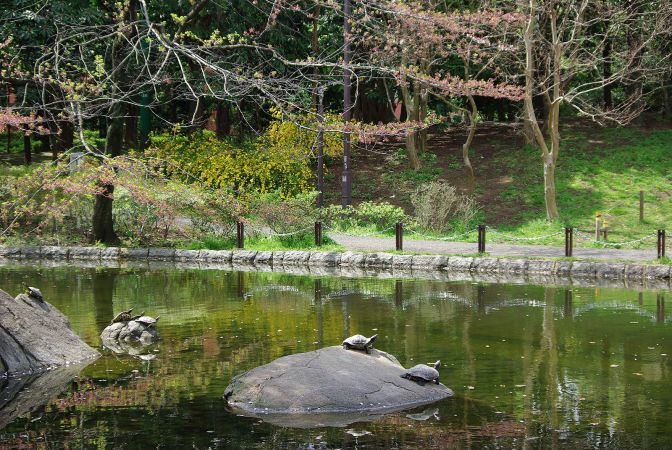 Turtles sunbathing in the pond of Sanshi no Mori Park. Photo by Tomofumi Sato.

Walking around the small backstreets in this southern part of Koenji, temples appear one after another; it’s easy to get lost wandering through temple gates and stopping by hidden shrines. When it’s time for a break from all the temples, Sanshi-no-mori Park offers up a spot to take stock under the shade of one of its many trees. This much-loved local park began as the government’s Institution for silk (sanshi means “silk thread”). It’s since been developed with a pond and gushing waterfall, particularly pleasant for cooling off in the summer heat.

Back at the buzz around Shinkoenji Station there’s Shinkoenji Street. Also known as “Look Street,” this shоtengai runs all the way from Koenji Station to Shinkoenji Station as a spiritual continuation of the busy Pal Shоtengai. Infused with a Showa-era (1926-89) atmosphere, the uncrowded open-air shopping street is home to independent businesses selling kawaii vintage clothing and family-run food joints.

One of these is husband-and-wife run Coffee Amp, which sells a wide selection of home-roasted single origin coffee beans. The boutique roastery lures from afar with irresistible wafts of roasting coffee, the chic industrial look and reasonable prices making it almost irresistible not to stop by for a cup of the good stuff. 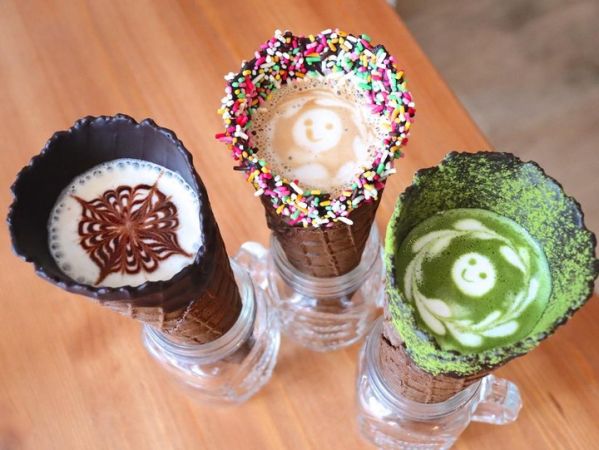 Steps away, there’s another option for coffee to-go: Coffee Cone Tokyo. But with a menu that includes drinks served inside chocolate-dipped, sprinkle-topped waffle ice cream cones, it’s far from your everyday coffee joint. Ideal for Instagram — or if you want a hefty hit of sugar and caffeine before you head off to rummage through all of the nearby vintage stores.

For something a little more relaxing, Cafe Bali Campur comes with rave reviews from hordes of happy customers. Located on a second floor along Look Street, the small family-run eatery serves a selection of authentic and delicious Balianese dishes on a backdrop of Balinese music and colorful artwork.

As the sun starts to slide down the horizon and lights start to warmly illuminate the small shops and long shopping streets, Shinkoenji comes alive with evening activity. Normally, the numerous live bars, yakitori (grilled chicken) restaurants and izakaya would be packed with weekend revelers and after-work drinkers. The district is a time capsule, a snapshot of pre-1990s Japan where independent businesses dominated over chain supermarkets and chain fast-food restaurants. Take time to walk the shоtengai, get lost along backstreets, coffee-in-hand, happen upon shrines, and sit for a while as the goji no chaimu (five o’clock chime) rings out across temple grounds. 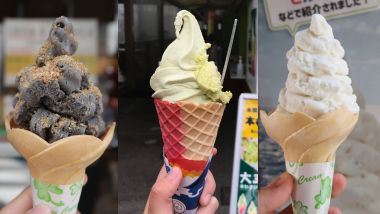 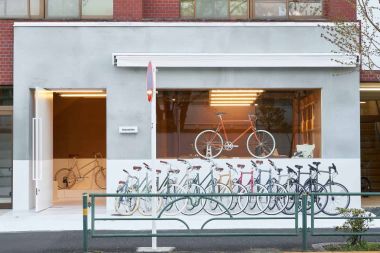 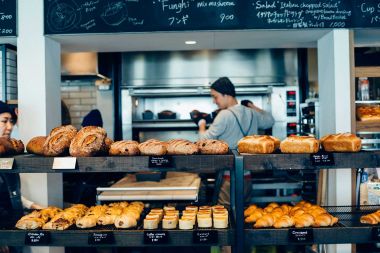