“Everyone deserves to take the time to invest in themselves,” says Ria Scott, who, after a years-long journey of self-discovery in Japan, founded the spiritual and mental wellness initiative known as The Being Room in 2020.

Born in the Caribbean, Scott moved to Tokyo in 2014 and never anticipated that she would one day build her own business in the Japanese capital. “I moved to Japan hoping to stay for just a couple of years to teach English in an international environment – as we all do – and then go back home to start my own organization. It just so happens that Japan became obsessed with me,” she (half) jokes. “Tokyo just keeps on giving me more opportunities.”

A businessperson, wellness visionary, spiritual facilitator – but absolutely not a guru, she stresses – Scott opens up about her journey and experiences launching a business in Tokyo as a Black, female entrepreneur.

What was the initiative behind The Being Room? 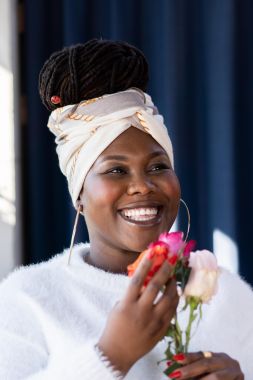 Ria Scott: The Being Room came from a very personal background. Around 2017 to 2018, I was in a bad “situationship.” In addition to therapy, I began journaling and discovered transcendental meditation, but this led me to be more curious to look for well- ness practices beyond that. I did breathwork, took yoga classes and meditation courses. I made some decisions in my life like switching jobs and began to have an outward view of life.

Eventually, I invited my friends for meditation sessions together. We had our first meeting with 12 people on Zoom in June 2020; that’s where the Being Room really started. Now, if I had to define The Being Room, it would be a safe online and offline community space for individuals to connect around well- ness and intuitive spiritual practices.

What was your own experience with wellness centers in Tokyo?

I initially looked online for wellness centers all across Tokyo, and obviously, what came up? Skinny. Yoga. Bitches. No offense to them – I love them, and they’re my friends – but that’s not who I am. When it comes to feeling safe in a [wellness] space, representation matters as a Black, fat, Caribbean woman like me.

When I refer to my blackness and fatness, it’s out of a sense of fact and glory. I wanted to be in a space where I wouldn’t
be viewed as an anomaly or this exceptionally glorious, Black, fat Venus. I wanted a space where I could just be. There was no place in Tokyo where we could have that level of vulnerability and authenticity.

Love Ria Scott’s story? Then these articles are also for you:

How did networking in Japan help you build The Being Room?

I knew that if I want to build a business, I need to build a reputation for myself. I became the co-organizer for the Pink Cow Connection, a meetup event for business owners and entrepreneurs, and joined a course called the JMEC – Japan Market Expansion Competition.

A huge part of growing The Being Room is getting the support of other foundations in Japan. My first connection was with the Legacy Foundation and Legacy Lounge. David and La- Tonya Whitaker, the leads of the organization and owners of the Soul Food House have been so gracious to provide us the Legacy Lounge space on the ninth floor of their building on every last Sunday of each month. Our other sponsor was Style Boat Market, a wellness brand in Tokyo that is mostly known for its yoga mats. Naoyasu Ogura from Style Boat Market agreed to offer us the mats once a month. My great friend Yoko Fredricka, who I met through JMEC, became our go-between. When I told her what I wanted to do, she took the role of my “momager.” 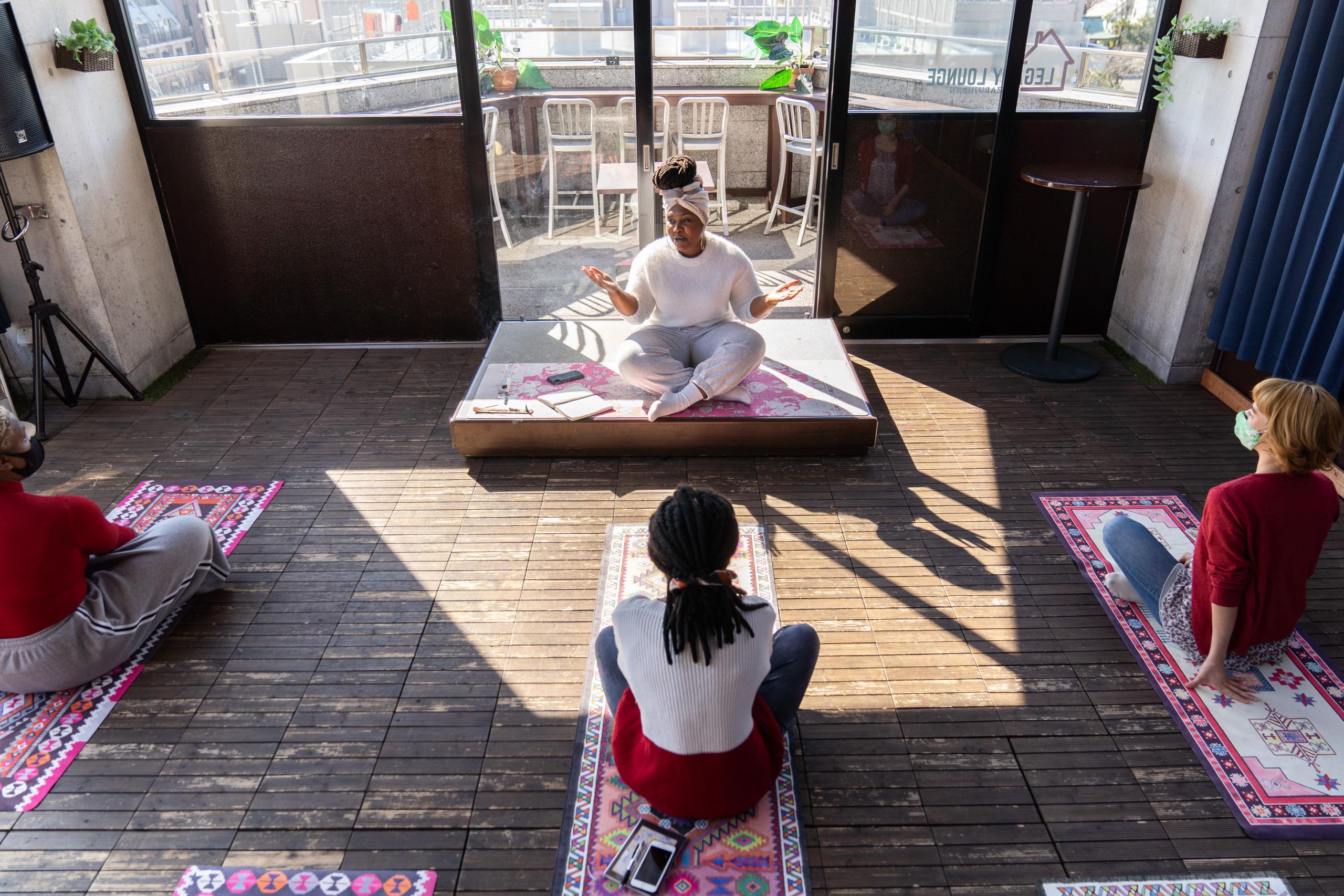 Ria Scott regularly hosts workshops at The Being Room which you can sign up for at thebeingroom.peatix.com

What challenges did you face while building your business in Japan?

Surprisingly, when I brought up the idea of The Being Room, there were not as many people who were willing to join in creating the business as I thought. It was more like “You do your thing. We’ll support you, so you get it, girl.” When you’re a business owner, there’s that initial stage where you feel like it’s the most amazing idea. Two or three months in, you have to ask yourself: “Is this going to be a real business or just an expensive hobby?” That was the huge decision I needed to make. Bills still need to get paid and time is limited. I’m still in the process of finding that balance of fun and business. What I have found is the importance of being real with the challenges and asking for help. You’ll find the Tokyo business community to be full of very giving people.

What is your ultimate goal for your career and The Being Room?

When I think of financial success for The Being Room, I imagine employing a young Black or Japanese woman. She is not here to teach English but to work with a starting salary of ¥6 million plus benefits, doing things that actually matter for me and her. That’s my vision.

Why is there such a need for spiritual and mental wellness support like The Being Room in Tokyo?

Tokyo is a beautiful city, but there is a climate of isolation that dictates how most people operate. There’s this idea that you’re in it by yourself and if you’re doing it with other people, then it’s mostly about being in the same [physical] space and not about building relationships. To connect with themselves, people need to have a safe space where they can be vulnerable and feel supported.

If you look at organizations in the U.S. or Europe, there’s that honesty and vulnerability in the community. I didn’t see that in Tokyo. 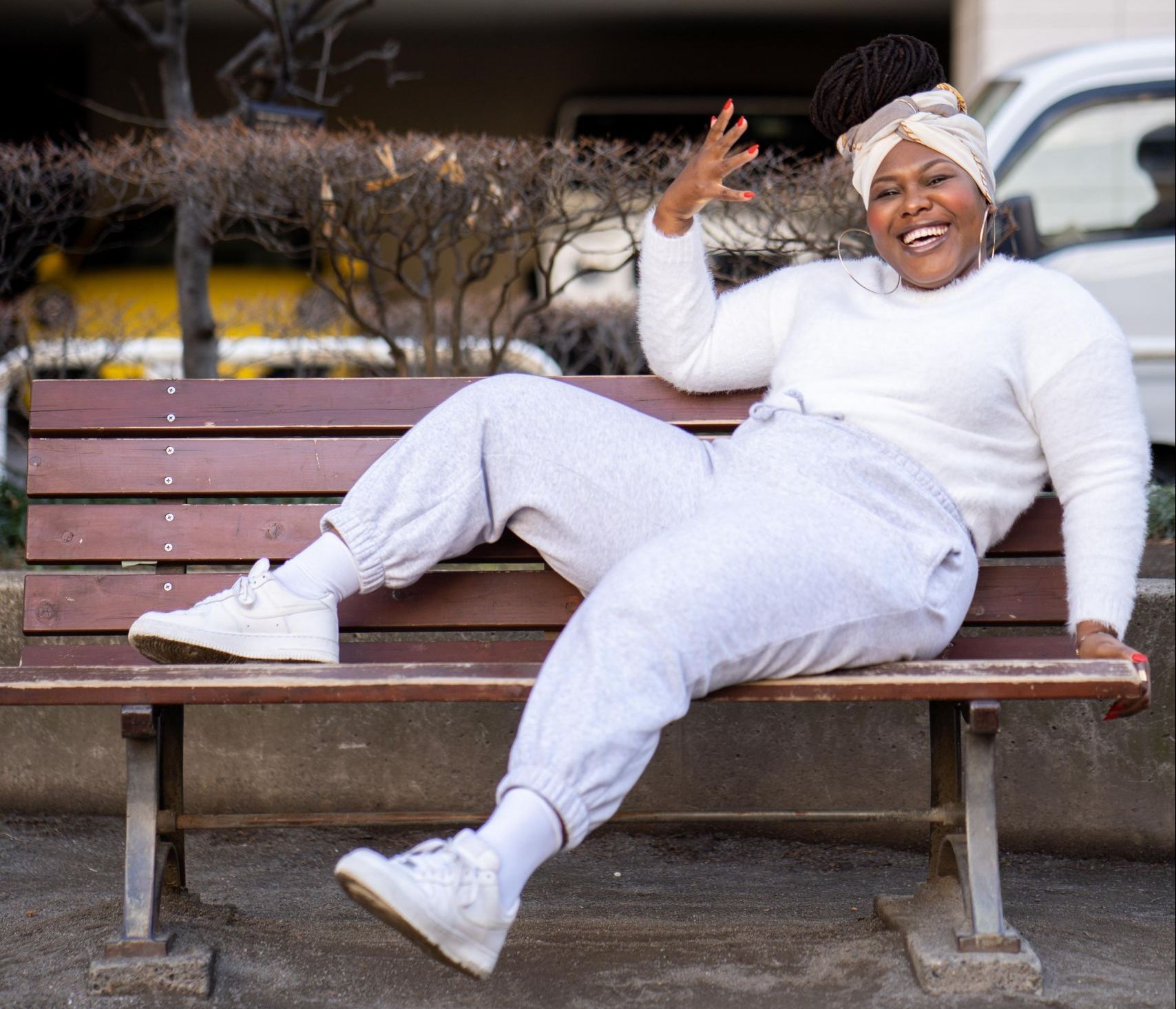 “I’ve been in Japan for seven years, and this stands the test of time: No matter where you are, authenticity and consistency matters.”

What advice do you have for other foreigners here who want to change their careers?

They say that the only career for foreigners in Japan is English teaching, but that’s bullshit. We live in 2021; getting a job anywhere in the world is hard. You need to accept some level of sacrifice to get opportunities, especially when you’re a woman. I’ve been in Japan for seven years, and this stands the test of time: No matter where you are, authenticity and consistency matters.

You could gamble on everybody else in this world but you are taking a short bet when you gamble on yourself. Everything is a risk and, at the end of the day, fear never goes away. It is an evolutionary, biological, mental step that we all have to take, but we have a choice to either allow our fears to dictate us or let them be a signpost towards the way we want. You have to choose: Do you want fear or freedom?