“Nikko is Nippon,” as they say 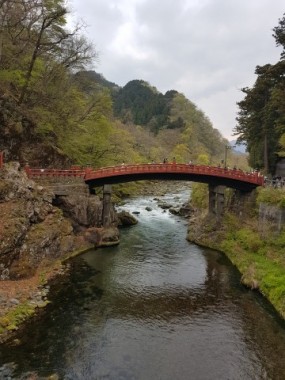 The sacred red bridge, Shinkyo, marks the spot Buddhist priest Shodo Shonin is said to have crossed the Daiya river on the backs of two serpents when he founded the first temple at Nikko.

It was from here that I too, embarked on a journey into the realms of dead shoguns, cultural splendour and religious intrigue.

Its beautiful scenery and historical grandeur makes Nikko a great place to escape the bustling day to day life of Tokyo. In just a couple of hours by train from Asakusa, you can reach one of the most northern prefectures of the Kanto district: Tochigi, home to breathtaking natural scenery, and also the final resting place of two of Edo’s most influential rulers.

Tokugawa Ieyasu was both the first shogun and warlord of Japan. He and his grandson Iemitsu, the powerful third shogun who imposed Japan’s strict isolationist policy 200 years, chose the religious centre of Nikko for their mausoleums.

Nikko, a World Heritage site, boasts these mausoleums, as well as impressive feats of religious architecture such as Rinno-ji Temple, the first temple founded at Nikko by Shodo Shonin, and Futarasan-shrine,  built to appease the gods of the mountains.

Enclosed in a forest full of tall cedar trees, the imposing temples dominate the hillside but still give the impression of being remote, spiritual places.

To mark their supposed stature as gods, the shoguns’ tombs are elevated to the highest points at the top of long staircases stretching into the lofty forest.

Nikko’s first temple, Rinno-ji, is undergoing major restoration work, due to be completed in the next few years, but still admits visitors to marvel at its religious history.

A slightly less grand, but no less eerie sight worth visiting while in Nikko, is the Kanmangafuchi Abyss, about 20 minutes upriver from Shinkyo bridge. 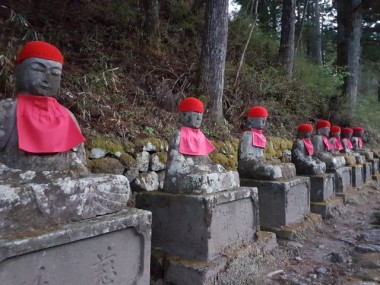 A row of around 70 Jizo statues, adorned with red caps and bibs, stand guard in a continuous line along a part of the river marked by strange lava-formed pools of rock. These mysterious statues are said to change in number. Offerings of coins sit in the laps of even the most rubble-like.

A bus ride into the mountains above Nikko reveals the spectacularly huge Lake Chuzenji, which formed from lava erupting from Mount Nantai. Sitting at 1300 meters, Chuzenji Onsen’s outstanding natural beauty makes it a popular place for hiking, boat trips, or just picnics along its banks.

Indeed, visitors are spoilt for awe-inspiring feats of nature, as just a five minute walk in the opposite direction lies the Kegon Falls, one of Japan’s top three waterfalls. The water plummets 97 metres down the rockface, and tourists can make a slightly less dramatic descent through 100 metres of bedrock to view the falls from above and below. 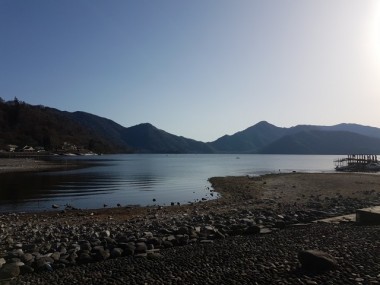 Staying in Nikko need not be expensive as a number of nearby areas have become largely onsen resorts, with a variety of accommodation to suit every budget.

My own hotel, located along the Kinugawa River, boasted two outdoor and an indoor onsen, with separate men and women’s facilities almost all day long.

Just half an hour from Nikko, Kinugawa-Onsen has a host of its own natural attractions to enjoy, both along the river and in the mountains. Access to the top of “Monkey Mountain” (Osarunoyama) is an adventure in itself, thanks to the Kinugawa Onsen Ropeway, a cable car up the steep incline. At the top, an observatory offers spectacular views of Kinugawa and the surrounding countryside, while the famous residents of the mountain can be fed apples.

Other attractions include the famous Edo Wonderland theme park and Tobu World Square, a collection of 102 miniature buildings and heritage sites from across the globe. 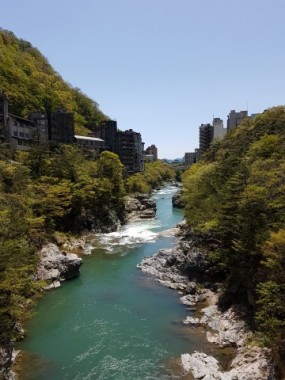 The area is easily accessible from Tokyo and a discounted travel pass, obtainable from the Tobu information kiosks at Asakusa and Solamachi (Skytree) stations, covers the cost of the round trip, as well as unlimited local travel on trains and buses once you are there.

There are two day and four day trip options, with some offering discounted ticket prices to theme parks, and the passes more than pay for themselves, working out at a fraction of the price of the accumulated individual fares.

With so much to see, Nikko is the perfect getaway for culture lovers, families, history buffs, nature enthusiasts and those who just want to escape the busy city to soak in an onsen for a few days.