The National Film Center celebrates the imagery of classic musicals

The National Film Center (NFC), located quite close to Tokyo station, is one of the quieter museums in Tokyo and also among the cheapest. This is definitely a good thing, as visitors will often find themselves entirely alone with the exhibits, unbothered by pressing crowds. 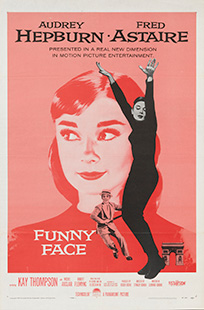 In addition to a permanent exhibition focusing on the history of Japanese cinema, there’s a space for temporary exhibitions, the latest being “Film History in Posters Part 2: Musical Films.”

This exhibition, which uses 54 posters from a private collection donated to the museum, features mainly English-language posters with some Japanese versions. These advertise a range of Hollywood musicals from the 1930s onwards, starting with such classics as Top Hat (1935) and The Gay Divorcee (1934)—retitled Continental for the more conservative mores of prewar Japan—Singin’ in the Rain (1952) and Gentlemen Prefer Blondes (1953), both of which set U.S. and Japanese versions of the posters side by side.

There’s a double interest. First, there’s the cinematic interest, the movie associations that the posters evoke, which is the most immediate pleasure. Then there’s the artistic interest that one gets from contemplating the style and differences between the posters.

The 2009 NFC exhibition “Soviet Film Posters in the Silent Era” showed the big influence constructivist artists like the sibling pair of Georgii and Vladimir Stenberg had in the years after the Russian Revolution. Along with others, they pioneered dramatic techniques of collage, interpenetration of shapes and innovative use of lettering.

These influences can be read in posters such as Cabaret (1972), which sets Liza Minnelli’s Sally Bowles character against a backdrop that repeats the film’s name. The posters that drive home a simple message like this tend to stand up as more effective works than the ones that don’t, such as Rodgers and Hammerstein’s Carousel (1956), which seems overloaded with information.

Much more convincing is the simple visual image of one of the best posters here, that for the Fred Astaire and Audrey Hepburn vehicle Funny Face (1957), which collages a soft close-up of the actress’ face in soft pinks with a dynamic image of her in a black leotard and tights, creating an image that’s modern, intriguing and makes one want to actually see the movie.