A modern take on the magic of traditional Japan

Originating from ancient Shinto rites in the 12th and 13th century, Noh is one of Japan’s oldest forms of theatrical dance drama performed by an all male cast. During the Tokugawa period, the theater form was refined as ceremonial theater, performed only on special occasions by professional actors for the samurai class.

The Yamamoto Noh Theater is the oldest Noh theater in Osaka and, for the first time in its long history, it is sharing this ancient art form through online streaming. The theater celebrated its 90th anniversary in 2018, and is registered as an official Japanese traditional cultural property. Over the years, its Noh performances and workshops have had a tremendous influence when it comes to raising cultural awareness of the genre and keeping the magic of tradition alive. The step to bring viewers an online stream version of the play “Takasago,” makes authentic Noh theater more internationally accessible and inclusive than ever before, allowing everyone from devoted Noh theater fans to those with a newfound interest in Japanese traditional culture to enjoy this traditional drama from the comfort of their own homes. The streaming incentive is also part of a wider effort by the Agency for Cultural Affairs to support cultural facilities in Japan during the coronavirus pandemic. 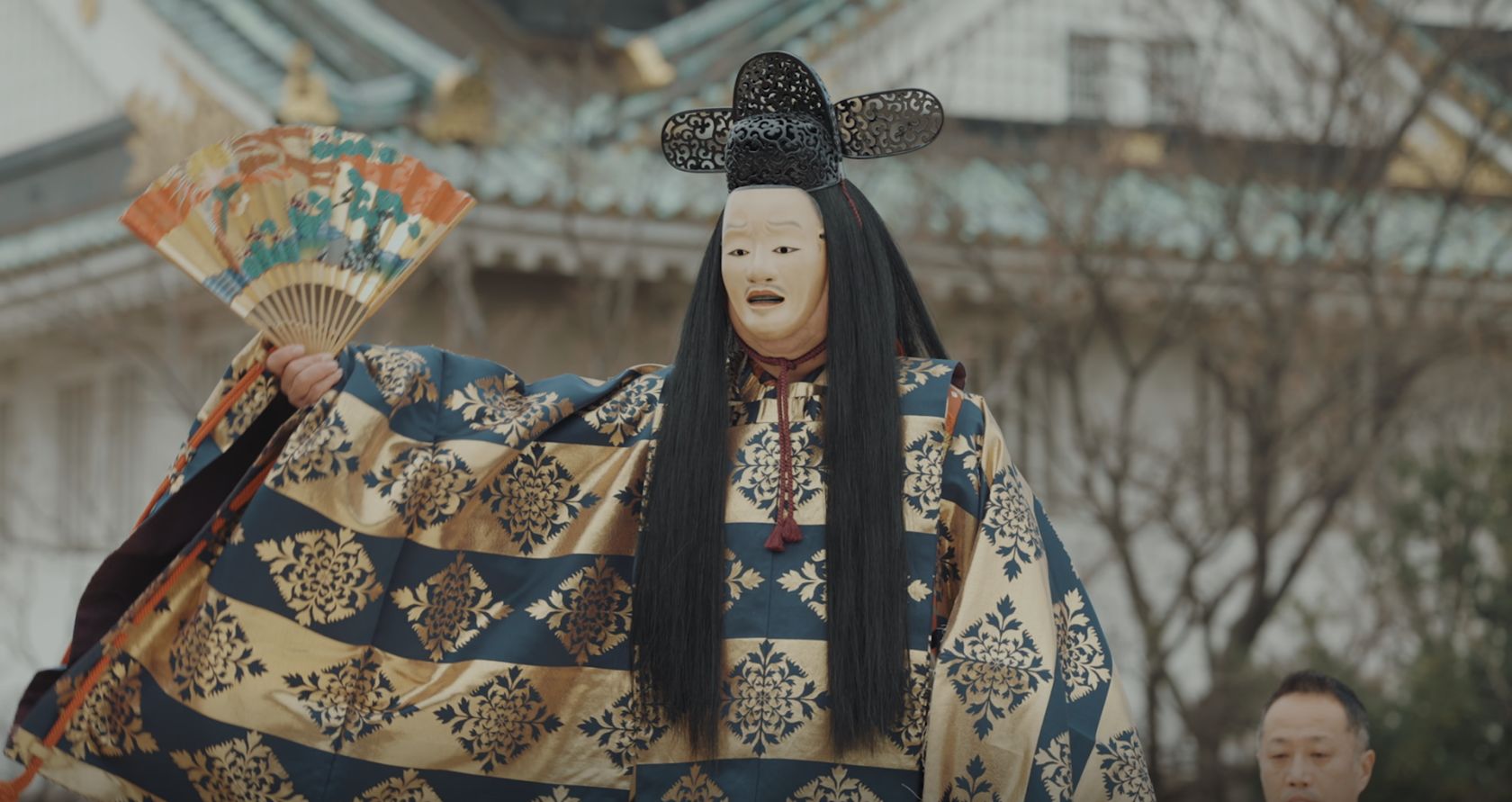 The story of “Takasago”

The play revolves around Tomonari, a priest from the Aso Shrine in Kyushu, and his servant as they arrive at Takasago Bay, a well-known location in Harima Province for its breathtaking views of pine trees along the cove. He meets an old couple sweeping away pine needles from a nearby tree and asks about the story of the Takasago Pine. The old couple tells him that they are standing under that very tree. This tree and another located far away in Sumiyoshi are called “Paired Pines” — the trees grew from the same root and, although separated by sea, have never ceased being husband and wife. The old man and woman reveal they are the spirits of the Paired Pines of Takasago and Sumiyoshi, and set off to sail on a boat to Sumiyoshi, where they promise Tomonari to meet again. Tomonari and his servant follow the elderly couple and are greeted by the great deity Sumiyoshi Myojin upon their arrival. Tomonari and the servant witness the deity perform a dignified dance under the beautiful moonlight in celebration of the Emperor’s peaceful reign, longevity and good fortune. 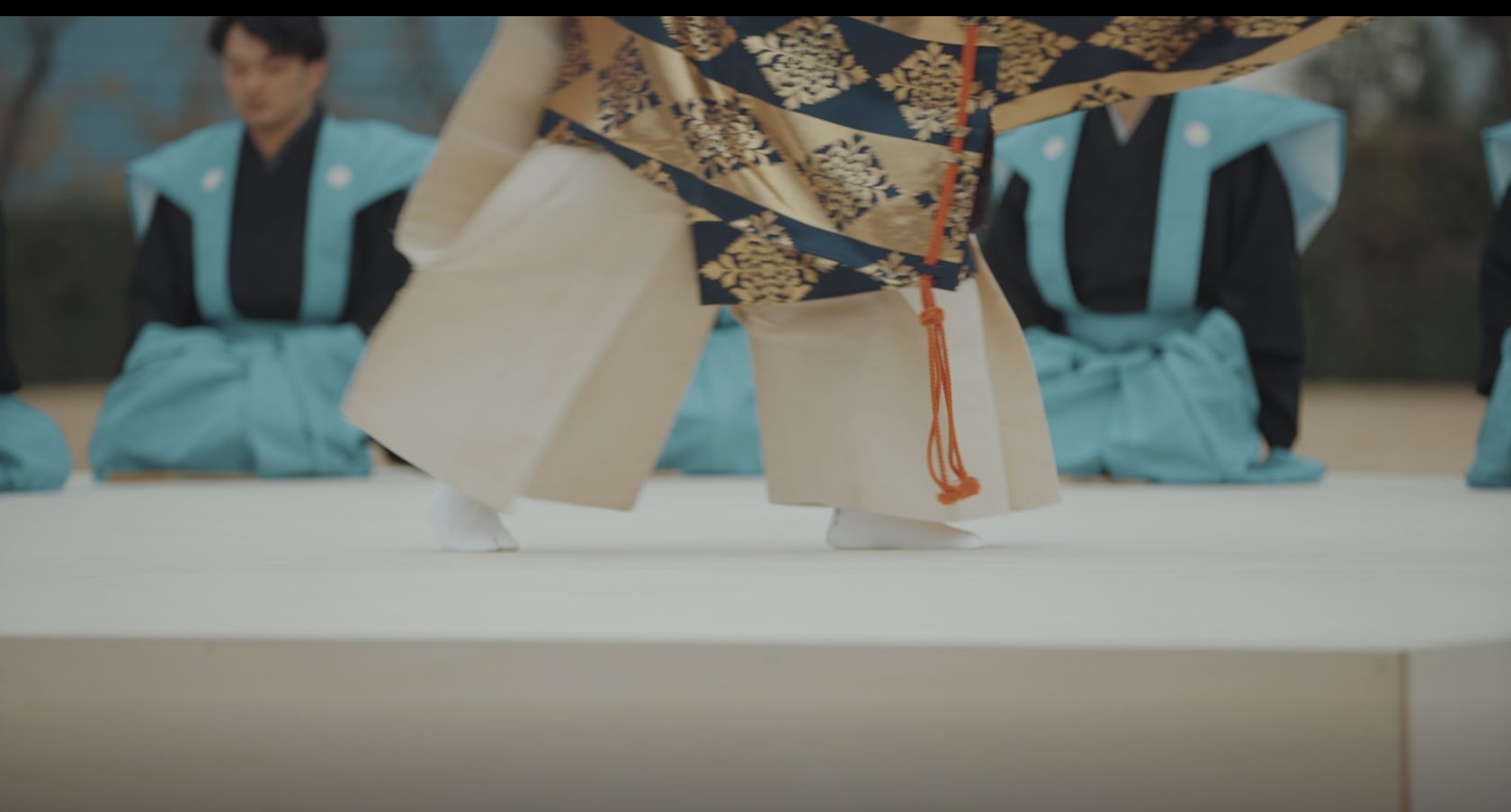 The mesmerizing performance of the Sumiyoshi Myojin puts viewers into the shoes of Tomonari, watching the deity perform in the grounds of Osaka Castle. What elevates this performance above traditional ones is this outdoor location. Noh performances are almost-always performed on an extravagant wooden Noh stage, but here “Takasago” takes place on one simple mat with the traditional architecture of Osaka Castle and the modern cityscape of Osaka’s skyline forming an impressive backdrop which further marries the past and present. In this setting, and through the lens of the camera for online streaming, “Takasago” is presented in a way never seen before. Smooth camera panning follows each performer’s every move, capturing the grace and boldness of the actors as well as offering a more up-close view of the intricate costumes. This filming technique is used frequently in popular dance studio videos as the film crew seamlessly dolly zooms in and out in sync with the rhythm of the music and performance. Long-time Noh devotees and those new to the art alike will love this performance.

Watch the performance of “Takasago”

The best events for art, music and more this October

Walking the fine line between spirituality and showmanship

The high-end shopping complex a year on the Ginza