Taking a Moment for Tokyo Fashion

A tribute to the quotidian

What comes to mind upon hearing “Tokyo fashion” will doubtless be different for a Tokyo fashionista than for those outside Japan whose knowledge is limited to two or three Harajuku backstreets. But even long-term residents are forgiven if their first thought is the extremities typified by the zoku fashion tribes that won the world’s attention in the 2000s.

That’s not to say fashion tribes have lost their edge. They absolutely haven’t, even if tourists on safari snapping photos of Gothic Lolitas in the wild have pushed the groups back to events they originated from. Rather, the truth is that they never were all that representative to begin with.  These groups have always been on the fringes of fashion, and all the better for it, too. As punk’s watered-down ubiquitous presence in mainstream fashion can attest, popularity is frequently a threat to authenticity. Still, subversion will always have currency, and only the most jaded observer is going to protest that. 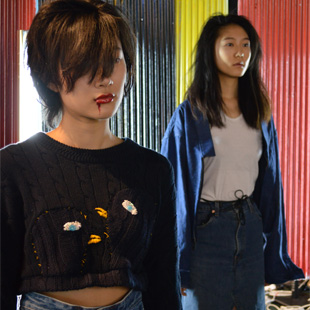 However, there’s another side to the city and its fashion, and it’s the one staring you right in the face—on your commute, in your combini. And that is the ubiquitous mainstream. The problem in paying attention to it is that in many other cities, the subtle aesthetics that color local character aren’t distinctive enough to really capture the imagination.

Yet, Japan—and Tokyo in particular—remains a pastiche of distinctive fashion that those from the outside have no problem identifying. The swaggering tobi trousers of day laborers, the dated but endearing “office lady” uniforms, and even the average salaryman does well—or better than most—in making sure that their suit at least fits, to comply with social stigma-enforcing standards, if not fashion.

Interestingly, a quick glance at Japanese fashion magazines reveals that Tokyoites are very astute at recognizing these outsider aesthetics in others. Popeye magazine in particular takes great delight in celebrating British postmen and New York garbage collectors as fashionistas, and yet tellingly they seldom turn that gaze on their own city streets. 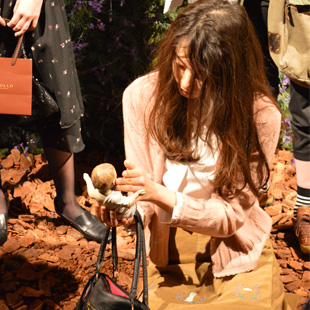 That is why Fashion Moment Tokyo, a new project from the ever-prescient maestros of Tokyo fashion, Yoshikazu Yamagata and Mikio Sakabe, was the revelation it was. The duo curated a presentation for a guerilla showing in Shibuya’s Hikarie of four young designers, with support from department store Parco, in conjunction with the Tokyo New Age group that is the face of the current zeitgeist. What united the Fashion Moment Tokyo group was their nods to the mainstream fashion that walks the streets daily yet captures those moments we’re familiar with in fashion form.

Young brand Pitecan Thropus took the lead with a series of ensembles that capture Tokyo’s dour singletons in motion: depressed office workers with saggy suits and umbrellas, well-to-do types that have known better days in ’80s boxy suits and clinging on to Isetan bags, which the designer paired with references to train hand grips. As a centerpiece, we find bedraggled single mothers in washed-out cardigans and clutching conbini bags. Not a look that would be considered aspirational, but as a perfect observation on the aesthetics that surround us in daily life, it was surprisingly warm: a different conception of fashion that isn’t going to try to sell us a lifestyle out of reach, but rather an appreciation for what we have already. 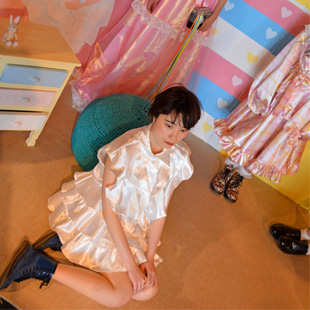 The ultra-cute Yuka moved to the kawaii that saturates the city, building a dollhouse as installation, and making her models mounds of frills with little punctuation.  It was a logical conclusion of the pervasive tastes of the moment, but far from holding on to the box freshness of a new Licca-chan doll, it was the washed-out palette of a well-loved doll, a dose of reality in the dream.

Daisuke Shimura went with a collection inspired by the fashion that girls wear when they come from the countryside to Tokyo, capturing the posturing and try-hard aesthetic that separate those raised in the metropolis from their inaka peers.  Finally, Bunka Fashion College graduate Hidaka asked us to to remember what we already know in fashion, presenting an anti-trend collection built on tweeds and items out of sync with fashion cycles that recalled Tokyo creativity to make style from just about anything.

Time will tell whether this subversion will capture the imagination of Japan or the world beyond in the same way as the instancy of the sub-cultures did, but at the very least, take this moment to appreciate the nuances that truly encapsulate the full range of Tokyo fashion.

Streetwear and breaking into the industry with the fashion YouTuber