Argued as being a way to save innocent lives, Japan’s first ever “Baby Hatch” was established with nothing but good intentions. However, a system that essentially allows parents to renounce their parenthood and anonymously give away their child raises questions of ethics, financial priorities and of what is thought to be the best interests of the child.

A newborn baby choked to death found in a locker in Kabukicho, an infant left at a supermarket toilet and a three-year old starved to death while the mother left home for a week. The recurring cases of abused and abandoned babies in Japan are brutal and also shockingly common.

Financially unstable, troubled with mental illnesses or in other ways unable — or unwilling — to take care of their child, some parents in Japan see no other option than to leave their newborns. Yet, instead of seeking counseling and assistance, some simply leave their (often already dead) babies in public spaces. In that way, the parents get rid of the supposedly overwhelming responsibility of caring for a child. It also allows the parent or parents to hide their identities and reduce the risk of being charged for abuse or murder.

The problem of child abandonment in Japan

It was in response to the many child abandonments (among those the case of a university student who gave birth in a washroom and later killed the infant) that Jikei Hospital, Kumamoto Prefecture, introduced the idea of establishing the nation’s first “Baby Hatch.” The idea was made public in late 2006. Based on similar services found in, for instance, Italy, Germany and South Korea, the privately owned Jikei Hospital argued that, by providing custody for children whose parents cannot give sufficient care, abandonments would decrease. Under the official name Kounotori no Yurikago, “White Stork’s Cradle,” the system has been in operation since May 2007.

The taboo of sex, unwanted pregnancies and abortion in Japan is another contributor to the issue of child abandonment in Japan.

However, the issue is contentious. In contrast to conventional child care institutions, Jikei Hospital accepts children anonymously. That means that anyone can, at any time of day, put their child into the custody of the hospital. Although parents are encouraged to reveal their personal information, they are not obliged to do so. Prior to its inception, [former] Prime Minister Shinzo Abe and half of the government’s cabinet ministers expressed their resistance to the project. In 2007, Abe stated that “Those fathers and mothers who anonymously give away their child [to the Baby Hatch] will not have my forgiveness.” Jikei Hospital Director Shouichi Hasuda, however, justifies the Baby Hatch by arguing that innocent lives are being saved.

It is true that lives may be saved, but what will the quality of life be like for the child in the longterm after it is left at the hospital? To deny a child its parent goes against the Committee on the Rights of the Child (Article 8 and 9). It is also well documented that children brought up in institutions are at a higher risk of developing anxiety disorders, depression and addictions, and are likely to experience isolation in society compared to those growing up in a family setting.

From the perspective of the best interest of the child and the parents, Japanese society needs a long-term plan to deal with the roots of child abandonment.

In its 13 years of operation, Kounotori no Yurikago has taken care of 155 babies (as of March 2020). A hospital employee at Jikei Hospital says that, because children in the hospital’s custody are eventually sent further to other institutions or foster care, they have no information on the children’s state of well being after they leave the hospital. 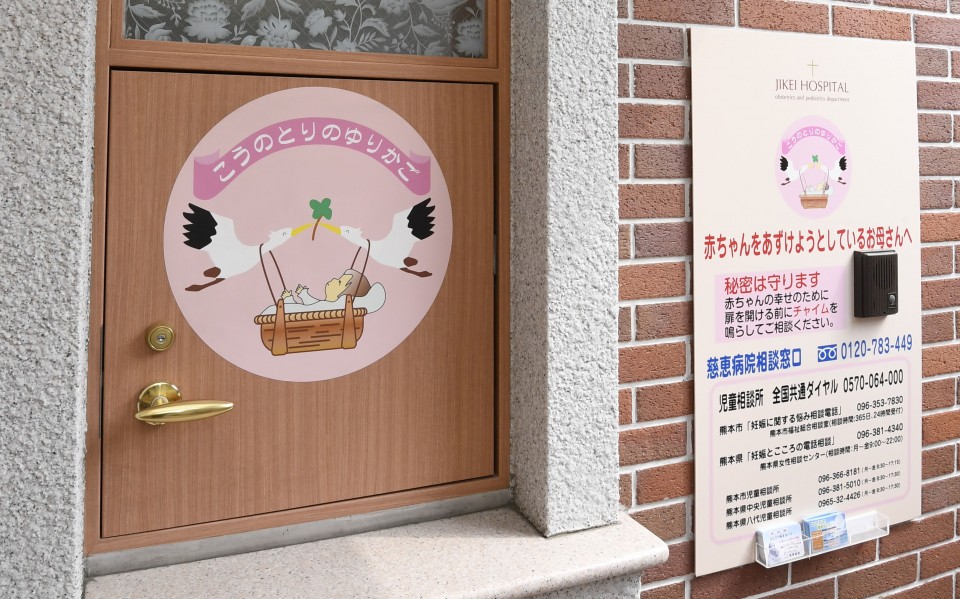 It is undoubtedly expensive to raise children in Japan. Expenses start right from birth, with a hospital delivery  costing up to one million yen. Closely connected to shame, financial struggle is not something many people in Japan speak openly about. As opposed to people in countries with an extensive welfare system, Japanese citizens are heavily dependent on their own capacity to survive and cover the costs of life’s unexpected turns. According to a University of Tokyo-conducted survey,  many Japanese couples want children but find it difficult because of the high cost of child-rearing. An increased emphasis on family issues in politics and economics would certainly increase the opportunities for families to stay together. It would also be effective in dealing with Japan’s record-low birth rate.

The taboo of sex, unwanted pregnancies and abortion in Japan is another contributor to the issue of child abandonment in Japan. To include contraception in the dialogue and as part of education, and to provide less costly abortion fees would enable young people to make active decisions about eventual pregnancy before it becomes an issue.

The number of children who are abandoned in Japan is alarmingly high. Most people would agree that the issue of poverty and unwanted teen pregnancies cannot be flushed down the toilet or locked into a locker. Similarly, should no one expect that the result of these social problems (children deprived of sufficient care) can be handed in to an institution and expect it to be the solution.

Jikei Hospital recognizes the problem of child abandonments and tries to approach it. The intention of protecting children is there, and so are the financial means, yet they are both misdirected. Instead of supporting the families in need, money is put into an institution that allows separation of families.

From the perspective of the best interest of the child and the parents, Japanese society needs a long-term plan to deal with the roots of child abandonments. An open dialogue about family issues together with expanded social protection would increase the chances for families to stay together.

Having a Baby in Japan as a Foreigner