The Craft of Beer

Tucked away in the foothills of the Tanzawa mountains in Kanagawa Prefecture is Atsugi, and there among its winding streets is Atsugi Beer. Established in 1997, this little brewery is a hidden gem of Japanese craft beer.

Head brewer Hideki Mochizuki is a charming fellow with an easy laugh. Despite having just returned from the Keyaki Hiroba Spring Beer Festival, an annual six-day extravaganza that’s part of the ever-increasing number of Japanese craft beer events, the Atsugi native is ready to talk about his experiences as a beer lover and brewer. 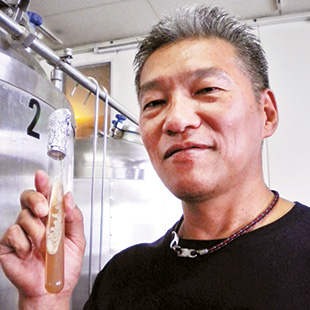 For Mochizuki, the appeal of his work is in the craftsmanship. While working for a medical instruments company, he discovered the satisfaction of saying, “We made that.” Now, he’s pleased to take that a step further.

“I like being able to look at this beer and say that I made it,” he says, shaping tanned hands around an imaginary glass.

Mochizuki first discovered the magic of beer while on his honeymoon in Germany, a memory that’s still fresh to him. “What is this?” he recalls saying to himself after that first sip. Before that moment, he knew only Sapporo and Asahi, two different yet reasonably interchangeable and conventional beers. German beers, he soon learned, came in different styles and flavors, with tastes he’d never encountered before. He was hooked.

When an opportunity to try his hand at brewing arose, Mochizuki didn’t hesitate to move from his salaryman life to Yamato Budōshū, a Yamanashi winery branching into German beer. There, he worked with a German brewer making helles, weissen, and a pilsner.

“Over two years, I brewed them 300 times,” he says. “When I left, I really knew how to brew, but I also wanted to do something different.”

One result of his experiments is Hopslave, an award-winning IPA that Atsugi brews for Thrash Zone in Yokohama, and a yuzu wheat brewed for Good Beer Faucets in Shibuya. Add to that a shiso (perilla—or what Mochizuki calls, “Japanese basil”) ale, a honey ale made with local honey, and a framboise (raspberry) lambic that is out of this world. It’s easy to taste his success.

Brewing is a balance between art and science, a challenge Mochizuki savors. Influenced by Bawa Demuryakor, a Ghanaian brewer who worked for Echigo Beer and is revered as the guru of yeast, he carefully counts yeast cells and monitors the chemistry of the brewing process with the eye of a scientist. Yet, it’s his own palette, instincts, and criteria—developed over the past 18 years of brewing—that determines the final outcome.

“Yeast is the most important thing,” Mochizuki emphasizes. It determines the flavor and quality of a beer, and must be carefully cultivated and managed to achieve the results he’s aiming for.  “I’m not a scientist,” he states, “but I must have an understanding of this in order to brew.”

Mochizuki plans to keep his operations small. The scale gives him greater flexibility to brew what he wants, but also suits his staff size. “It’s just me,” he says with his characteristic quick smile. “Someone comes twice a week for a few hours; but otherwise, it’s only me.” And that’s true craftsmanship.

How a postwar decision brought upon the hay fever epidemic