If you haven’t seen the first season of “The Naked Director,” click here to read our previous breakdown of the series.

Season two of Netflix’s “The Naked Director” was released in late June. The story is based on Nobuhiro Motohashi’s non-fiction novel “Naked Director Toru Muranishi,” and season two kicks off at the height of Adult Video (AV) star Kaoru Kuroki’s popularity in the early 90s, shortly before the burst of Japan’s bubble economy. Now 25-years-old, Kuroki has left her studies at Yokohama National University and is enjoying mainstream recognition as an outspoken commentator on feminism in Japan and women’s sexuality. This level of mainstream popularity — unprecedented for an AV model at the time — transformed Japanese perceptions surrounding not only gender equality and women’s sexuality, but also what was achievable for women in the AV industry.

A Strong Female Voice in Media

Kuroki only released a handful of videos (and a perplexing solo E.P.) during her career, but quickly progressed from promoting her work on late-night TV to becoming a regular panelist on daytime talk shows. Surprised by her rapid rise to fame, Kuroki — who described AV models as soldiers of the sexual revolution — lamented her time spent away from making videos, but told writer Nicholas Bornoff in a 1991 interview that she felt that there was a social need for her to be heard.

At a time when Japanese media lacked strong female voices, especially when it came to sex and feminism, Kuroki’s signature polite-yet-frank manner of speaking filled that void. Outspoken women were unfamiliar territory for male TV hosts and panelists at the time, and Kuroki proved intimidating. Where salacious lines of questioning from men were typically met with nervous giggles, Kuroki held her own, often leaving male panelists visibly irritated.

“She has a knack of making her work in adult video seem like a political and feminist crusade.” (Rosemary Iwamura Letter From Japan 1994)

From Taboo to Success

However — as Fornander observed — Kuroki’s popularity transformed AV from taboo to a legitimate path to broader success in the mainstream entertainment and advertising industries. Social barriers were lowered and AV even became a potential source of additional income for housewives, students and office workers. This is reflected in season two of “The Naked Director” with the introduction of Miyuki Chiba’s character who, inspired by Kuroki, joined the industry.

“Kuroki changed the image of AV girls; she didn’t seem to be making videos because of a lack of options but rather as an informed choice,” Rosemary Iwamura said in her 1994 essay “Letter from Japan.”

A model in every sense of the word, Bornoff mentioned that “Kuroki sees herself as a model for women in general, she draws out their desires and helps them to discover themselves”.

A Matter of Taste

A topic present throughout the entire series, the assertive sexuality depicted by Kuroki in her videos was deemed frightening and hard to watch by many of her male viewers. Kuroki supposed that some male viewers found these scenes confronting because it made them recognize the wilder, more uninhibited side of their own girlfriends. Male audiences beginning to see their partners as sexual individuals was an important breakthrough at a time when, as Iwamura pointed out, women in Japanese film and television largely existed to aid the development of the male lead character. 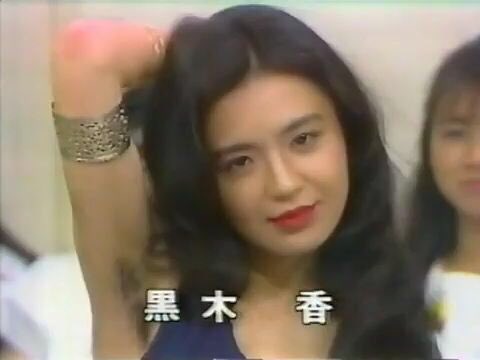 Kaoru Kuroki’s decision to stop shaving her under-arm hair spurred a boom for armpit hair in the 1980s and was a symbolic protest against Japan’s censorship of pubic hair in print and film.

Conversely, if Kuroki was championing female equality in mainstream media, why was a consistent theme in her work also the depiction of rape and female submission? Meeting with former Hungarian pornographic model and politician Cicciolina in the late 80s, Kuroki was surprised to learn of her reservations regarding sadomasochism (SM).

“Cicciolina sensei doesn’t have any masochistic tendencies, I do,” Kuroki told Bornoff. “Japanese society precludes personal thinking and opinions. It stifles the creative and even metaphysical side of life.”

She found that through her performances she was able to break through her “wall of shame,” thus liberating aspects of herself that she had suppressed. Bornoff pointed out that Kuroki’s SM scenes were not a sign of submission or a betrayal of women’s quest for liberation, but a matter of personal preference.

“On-screen and off, the winning side is the one who gets the orgasm,” Kuroki assured.

Still a Long Way to Go

Although the Netflix series has brought renewed attention to Kuroki’s legacy, it has also received criticism for its forgiving portrayal of director Muranishi, who allegedly physically abused Kuroki in the 90s and recently came under fire over sexist tweets regarding the #metoo movement. Ironically, while the real-life Kuroki made steps towards gender equality in Japan, the series itself has been criticized for its misogynist storytelling.

“The women in the story are still props in Muranishi’s stories and he never really attains any real self-awareness,” says Adi Tantimedh in an article for Bleeding Cool.

Japanese politician Masae Ido also points out on her blog that the forgiving portrayal of Muranishi throughout the series largely stems from the fact that his questionable actions are often the result of the misdeeds of a female character.

Despite the waves that Kuroki made in the 90s and however “The Naked Director” tries to approach the topic, Japan still has a long way to go in terms of gender equality. Recent incidents such as Olympics boss Yoshiro Mori’s sexist comments and the Liberal Democratic Party’s sexist meeting policies only serve to reinforce this.

Although her time spent in the public eye was short lived, Kuroki had a strong impact on Japanese perceptions of sex, gender equality and censorship. She created pathways to mainstream success that previously hadn’t existed and filled a void in Japanese media with a voice that challenged the status quo, helped everyday Japanese women to discover themselves and forced men to reconsider their assumptions about women.

A loose fictionalization that’s not without its faults, “The Naked Director” introduces a new generation to Japanese AV’s first mainstream star and her pioneering influence on Japanese culture and society. Its rose-tinted depiction of the series’ lead (male) character in a time when light is finally being shed on systemic gender power imbalances is an ironic reminder of the continued importance of pioneers like Kuroki.

Primordial horrors of a fertile mind. An armored humanoid on a mysterious mission descends ever deeper into a rusty, post-apocalyptic world, a labyrinth of monstrosities, grime, blood, suffering and unspeakable violence. Stop-motion animation master/pioneer Phil Tippett, whose credits include two…