Horiyoshi III talks irezumi and the underbelly of Japanese culture

When I first entered Yoshihito Nakano’s irezumi studio in Yokohama, I thought I had gotten the wrong address. Rather than a typical tattoo parlor, the room resembled a tiny school library filled with hundreds of books on everything from paintings to Chinese calligraphy. However, there were some clues that this was a place where you could beautify your skin by needle. Chief among them was the sight of a man in his 20s lying down behind a screen while an elderly man hunched over a small pool of blood collecting on his shoulder. 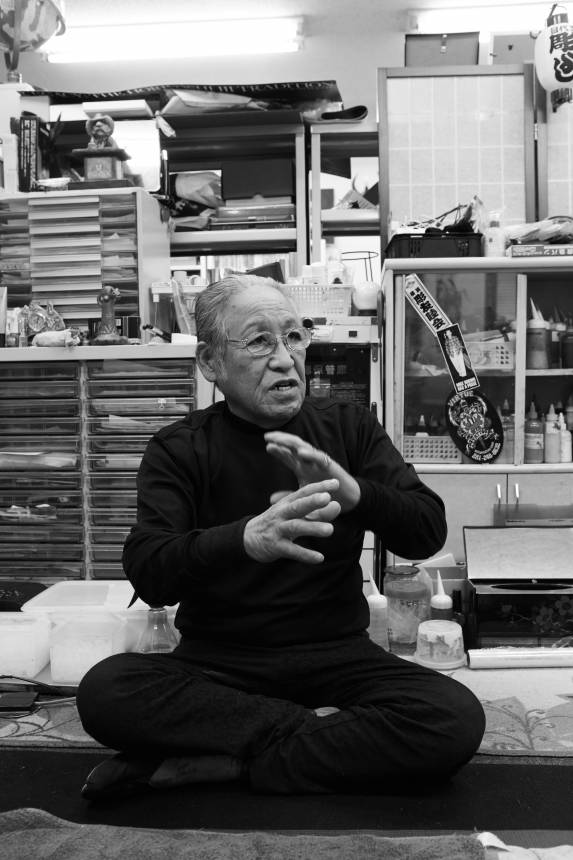 The older gentleman was Yoshihito Nakano, also known as Horiyoshi III, one of Japan’s most prominent horishi (artists that create traditional Japanese tattoos, called irezumi). On that day, he was putting the finishing touches to a section of a tattoo covering most of the customer’s back and thighs that depicted everything from Japanese dragons to gods, warriors and tigers. When I asked the artist about the significance of the design, he said:

“You usually do dragons on the upper part of the body, and tigers on the lower. In Japanese culture, dragons are the kings of the sky while tigers rule the earth. A dragon fighting a tiger symbolizes the battle between heaven and earth. It represents strength because there’ll never be a winner in this battle. That’s why tiger tattoos need to be facing up, otherwise the tiger would lose to the dragon and the entire meaning would be lost.”

The dragon is one the most popular tattoo designs in the world of irezumi. According to the artist, five or six out of ten clients request dragon tattoos. “Dragons are these mysterious creatures with amazing powers but no one would get them if they weren’t cool. There’s no animal cooler than the dragon … But ‘cool’ also has a lot of meanings, doesn’t it? It can mean beauty, strength, tradition, religion.” 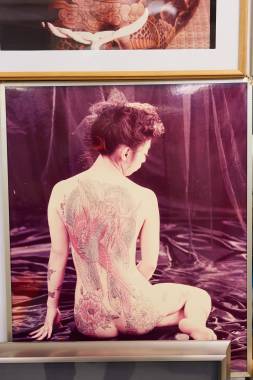 For Horiyoshi III himself, though, “coolness” was always closely linked with bad behavior. “I got my first tattoo when I was about 11 or 12. It was on my left hand. It was a manji character [the swastika which existed as a traditional Sino-Japanese character before Nazi appropriation of it]. I wanted a tattoo because it made me feel like a delinquent, and I thought delinquents were cool. As for the pain of getting a tattoo, that’s precisely what makes them worth it. Because tattoos hurt, it’s cool to get one.”

That’s one of the reasons why, over the years, tattoos became synonymous with the yakuza in Japan. Even today, getting a tattoo is painful—but back when electric needles weren’t really a thing, tattoos were essentially exercises in how much pain a person could withstand, which naturally made them attractive status symbols to criminals. But Horiyoshi III not only opposes this whole association between tattoos and criminality, he also questions why we assume that all yakuza are evil.

“Why do we think of organized crime groups as bad people? Ordinary people do bad things, too. Many of them kill other people. True, the yakuza kill other yakuza, but anyone can kill. Who even came up with this whole way of thinking that yakuza = tattoos = scary, bad things? Take the hikeshi of the Edo Period for example. They were early firemen and they all had tattoos. When there was a fire, they would risk their lives to extinguish it, saving other people’s homes even if their own house was burning down. That’s chivalry. They definitely weren’t bad people. They saved many lives. And their tattoos were meant to manifest their chivalrous spirit. So tattoos do not equal scary things.” 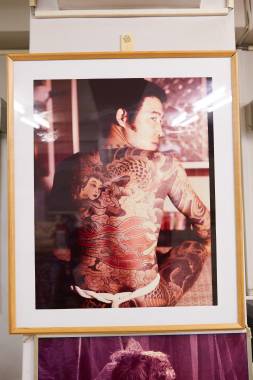 The artist then added that after the devastating 1995 Kobe earthquake, the Yamaguchi-gumi, Japan’s largest yakuza group, delivered life-saving supplies to the people affected by the tragedy before the government even had the time to act. That didn’t change the public’s opinion on tattoos, though. The association with the yakuza has even caused tattoos to be banned in most Japanese bathhouses and pools. According to Horiyoshi III, it’s “discrimination in its purest form. Where’s the humanity? Pools, hot springs, saunas—everyone should be free to use them, so why are we singling out people with tattoos?”

The artist is holding out some hope that the 2020 Tokyo Olympics will change things. As foreign athletes and tourists visit Japan, many of them sporting tattoos all over their bodies, public baths and the like might abandon their no-tattoo rules in order to turn a profit. Before then, though, Horiyoshi III and his customers are also helping normalize tattoos all across Japan.

“What’s really interesting is that people only want tattoos in visible places nowadays. In the past, people usually wanted their tattoos to be hidden. It was considered shameful for a man to have visible tattoos. Now things have changed. I’m doing a lot of tattoos where everyone can see them. It’s totally the opposite of how it used to be.”

You can argue that it’s Horiyoshi III’s amazing art that makes people want to show off their tattoos, but, interestingly, he himself is hesitant about calling his work art. “Are tattoos art? I have no opinion on that. That’s something for other people to decide. To me, tattoos are life, you know? Sculptors sculpt, potters make pottery, painters paint, and tattoo artists make pictures on bodies. It’s up to other people to look at it and decide whether they think it’s art or not. As for me, I see myself as a craftsman. I never thought of myself as an artist. I don’t think my tattoos are art. But maybe I just don’t know what art is?”

Looking at some of Horiyoshi III’s work, it’s hard to agree with that last statement.