Changing perceptions, one pose at a time

Two cups of exhausting work, half a teaspoon of urban-induced stress, and a pinch of inevitable marital tension: this is the recipe for an emotional breakdown of Britney Spears proportions. An airy, well-lit room, paired with soft music and a savvy yoga instructor: this is the cure.

Tom Wada is an experienced yoga practitioner of 13 years, and reveals to Metropolis his unique experiences of teaching yoga in Tokyo, and how the practice transformed him from an unhappy salaryman to a fulfilled human being—and how it can do the same for anyone.

“I was working for a Japanese mega company when I was introduced to the world of yoga by a close friend,” says Tom. “Yoga? I thought at first. That doesn’t sound cool at all. But then he showed me some of his moves, and it was nothing like I had imagined. It was completely different.” 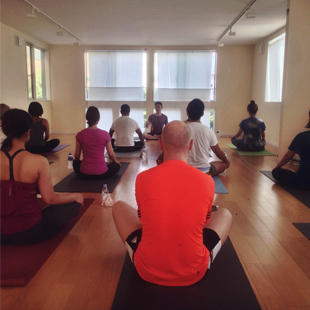 This is how Tom starts the story of how yoga turned his life around. A trace of excitement can be heard in his voice when, over a decade later, he speaks about “Ashtanga”, the “eight-limbed” yoga style that focuses on the fluid transition between positions.

“After the first taste, I was hooked. I started by going once a week, then twice a week, and before you know it, I was going six times a week. I guess it was love at first sight. Yoga helped me deal with stress by teaching me how to make space in my mind, and therefore in my life as a whole.  [To] take a step back, see things in perspective, and act on the problem with groundedness, security, and a renovated sense of creativity,” Tom explains.

Thirteen years after discovering yoga, Tom quit his corporate job and now works for himself and teaches at various yoga studios, including the International Yoga Center (IYC) in Omotesando. The studio was founded by his sensei, Ken Harakuma, one of the very few authorized teachers in the world of Ashtanga—a form of yoga that gained popularity in the early ’00s, when celebrities such as Madonna, Sting, and Gwyneth Paltrow began touting its benefits.

“There might have been other ways, but I took a different direction. Yoga gave me the courage to shape my own path, and not simply follow in the footsteps of my father and grandfather,” he states.

Tom obtained his certificate by practicing with gurus in Dharamshala, India. According to him, although practicing in India gives you a glimpse of the spiritual and cultural side of yoga, visiting the region is not a must anymore, especially with the variety of Westernized schools that have developed over the last few decades. According to Tom, schools like these tend to focus on a more modern approach aimed at physical and mental wellness over the stronger religious aspects linked to Hinduism.

“The modern approach, on the contrary, emphasises the importance of being able to practice on our own, anywhere, anytime, making it a part of your daily routine—just like taking a shower, but on the inside.” 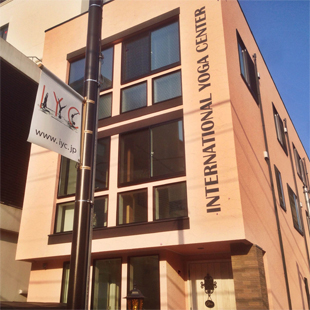 Japanese perceptions of yoga are a crucial point in Tom’s teaching style. He mentions how the 1995 Aum terrorist attack—which was perpetrated by a cult that started off as a yoga class—cast a large shadow over the way Japanese perceive yoga for over 10 years.

“Now yoga is booming, especially among women, due to the growing number of actresses and models that are practicing and, hence, spreading the health benefit of it. But this creates yet another barrier,” Tom explains. “It’s becoming more and more difficult for guys to enter a studio, because of the highly female-centered advertisements all around the city, giving the impression of yoga as a ‘girl thing’; whereas, in fact, for hundreds of years, it was solely a male practice.”

Conceptually, Tom says the problem lies in the fact that men feel uncomfortable showing others their flexibility—especially to women. “But the crux of the matter is that, if you’re aware of the people surrounding you, you’re doing it wrong. Yoga [is based] in being so concentrated, you don’t notice anyone else in the room.”

What is the solution to this modern day gender problem in yoga?

“Many male celebrities regularly practice yoga and meditation. The only thing they need to do is ‘come out’ to the public,” Tom chuckles. “So people will change the way they perceive it and think, ‘If he does it, I can do it, too!’” 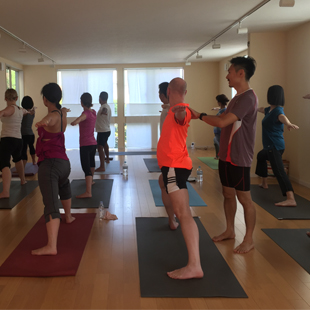 Another challenge Tom faces are perceptions that yoga is merely a stretching exercise. In reality, the practice largely consists of meditation, which leads to another challenge, as classes can become restless and impatient. “The reason this happens is that here in Japan, people associate meditation with Zen Buddhism, which involves a set of rigid rules, sometimes resulting in such an intense and rigorous concentration that wears you out instead of having a regenerating effect. So the result is that when you mention meditation to people, the reaction is: ‘Oh, that’s hard. And boring.’ But it’s not. The philosophy behind yoga is practical and truly tangible, and it teaches you how to live a happy life.”

Tom believes that if more people practiced yoga, society as a whole would benefit, a belief that led him to teach. “Because I felt it,” he says. “Because I loved it, now I want to share it with the world.”

Tom teaches Hatha yoga, and his strength lies in the fact that his approach doesn’t adhere to any one school, but takes inspiration from a variety of different styles he’s learnt over the years, and developing them into a personal and rather unique teaching style. As he was raised in the United States, Tom often acts as a cultural bridge between his English speaking and Japanese students.

The class lives up to expectations. Tom accommodates students in one of the spacious and tranquil IYC rooms, with warm wooden floors and shiny green leaves appearing just beyond the wide windows. The classes are conducted in English and comprise of diverse groups, which makes them a great place to meet people from all over the world with a shared passion for achieving peace of mind.

Tom guides his students toward a state of relaxation, accompanying them through a series of exercises focused on easing the accumulated tension and reaching a state of muscular and mental relief. Such poses are never meant to hurt or distress your limbs, and Tom personally ensures that each student’s experience is safe, enjoyable, and meaningful.