Tiptoe through the first floor and stop to throw a shuriken. Advance to the third floor, and you’ll find yourself talking with robots. No, you’re not in a computer game. This is what’s on now at Miraikan, the National Museum of Emerging Science and Innovation.

It’s not an art or history museum, or even really a museum at all in the traditional sense. Museums can often be seen as stuffy and old, with exclusively historical content and only a touch of where we are now right at the end of the exhibit. That kind of thing can be really exhausting to look at.

But Miraikan presents contemporary, engaging exhibits, with just the right amount of authentic artifacts and historical explanation. I visited two exhibits that are on at the moment: The NINJA – who were they? and Robot Chat Room. The exhibits are interactive and attention-grabbing, and neither are overwhelmingly dense with information. Maybe it’s to do with the fact that it’s very kid-friendly. 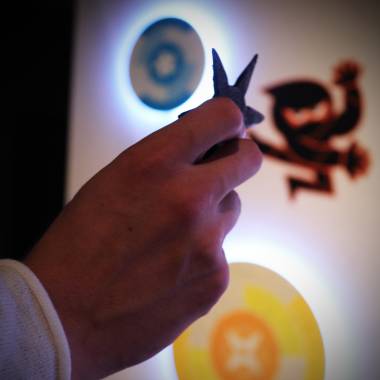 The NINJA – who were they? is a special exhibition about the mind, skills and body of the ninja. You first walk through a hall of old manuscripts into a large room where it’s obvious that ninja training is taking place. It might not be a real ninja school, but it’s still pretty fun. You can throw shuriken at targets, jump over things, and perhaps most difficult of all – master the art of tip-toeing.

You’ll learn about how to sharpen each of your five senses, train your memory, and tell the time by looking a cat in the face. Something quite special about this exhibit is that the ninja’s ancient wisdom and skills have been tested with modern science by Mie University.

Throughout the exhibit, you’ll see the scientific explanations of why certain techniques worked in the ways they did. It’s really quite fascinating and has a lot to do with their diverse practical knowledge of nature and society. If you successfully go through the training you’ll receive a Ninja Certificate. It’s rather small, but don’t let that get you down. It’s just so that you remain discreet.

The Robot Chat Room is also a temporary exhibit. It’s a small part of a larger, permanent exhibition about robots and androids (Create Your Future). The whole exhibit is pretty inspiring, or scary, depending what your stance on robots is. The Robot Chat Room might even change your mind about it. This is an exhibit where you can watch robots have conversations with each other, and where they’ll even turn to you to ask for your opinion. We had a pretty interesting conversation about nursing homes and if robots could help out as carers in the future.

I must admit that I went through the conversation feeling totally bemused that I was speaking with these robots. It was only upon reflection afterwards that I realised they kind of bullied me into answering their questions sympathetically. But, how can you not feel something like warmth towards those little robots sitting in front of you? It’s something to do with their infant-like size, big wandering eyes and their cute high-pitched voices.

Miraikan aims to spark discussions about our futures in terms of how science and technology evolve in our culture. The temporary and permanent exhibitions at  Miraikan are curated together with universities and researchers. 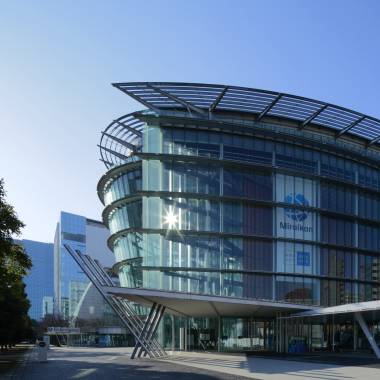 Photo by Miraikan (National Museum of Emerging Science and Innovation)

The Robot Chat Room, for example, is actually an exhibit from Osaka University, the Autonomous Robot Research Group and Ishiguro’s Human-Robot Symbiotic Interaction Project. They are researching natural dialogue between humans and robots, so your conversations will be recorded for further observation. It’s a good opportunity for us mortals to speak with conversational robots, even though it’s inevitable we’ll be talking with robots soon enough anyway.

Both The NINJA and The Robot Chat Room only have a few weeks left now, both finishing on October 10. The NINJA exhibit will be moving on to be displayed at Mie Prefectural Museum. The robots will return home to Osaka University to share with their researchers everything they collected in their time abroad at Miraikan.