Gaming gear is reborn into fashion

Thunderbox, from designer Tsuyoshi Morita, is a surprisingly well-kept secret on the Tokyo fashion scene. Word of it spreads purely via its fans’ backs across the city as fellow streetwear aficionados clock the geek-chic references and gravitate to the Thunderbox mothership. Accordingly, the recently opened flagship is named Nazo no Mise—literally, “the mystery shop”—and, in keeping with the designer’s subcultural leanings, is located in Nakano over in West Tokyo, a stone’s throw from the subculture mecca of Nakano Broadway. 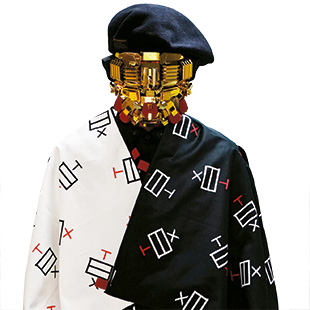 The streetwear style Thunderbox subscribes to is in line with a lot of the hype-fuelled brands of the Harajuku backstreets. But once in the store, it’s an altogether welcoming experience—even if the store staff are known to wear the Thunderbox masks that accompany each season. The masks themselves are made from various pieces of subcultural paraphernalia: for the gaming-themed collection, masks are made from old controller and Game Boy parts; and for the “mecha”-themed output, Gundam plastic model kits find themselves repurposed. This approach extends directly to the clothes themselves, wherein, like the masks, various subcultural references are dissected and arranged, always with a sense of humor, and crucially with a sense of style.

It’s this all-important sense of style that separates Thunderbox from the usual geek-chic fare. Its references are kept relatively guarded but also pleasantly obscure, that only those in the know will … well, know.

In the upcoming season, the designer’s ongoing affair with retro games gets center stage. Foreign fans will be delighted to see a range of items inspired by the color scheme and lines of both Nintendo’s Japanese Famicom and the Western NES turn up in competing designs. Even the ubiquitous NES Zapper turns up in fashion form. If that last sentence lost you, this might not be the brand for you. But elsewhere in the output, there’s bound to be a reference that appeals, whether it be the red arm bands inspired by legendary avant-garde electronic act Yellow Magic Orchestra, or any number of on-the-nose nods to Star Wars. The eclectic mix of references is not only well-observed, but also well-executed. D-pads turn up as buttons, 8-bit characters are embroidered, and it just satisfies the craving to wear your subcultural affiliations in a way that any number of half-hearted collaborations and merchandise can’t. 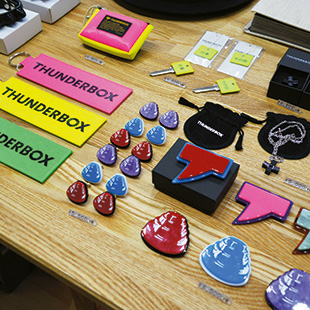 Shop visitors will discover the current graffiti and kung-fu themed collection on the racks, as well as some of the fixed items that turn up every season, including a particularly popular Game Boy-themed riding jacket, where unbelievably the buttons, D-pad, and even speaker slits are included in the cut of the jacket. Those looking to get started can easily buy into the accessories, including energy power-up-themed studded bracelets; failing that, the snapbacks and headwear are an easy entry point.  At the other end of the spectrum, while designer Morita likes to keep the label open to all—especially on the price—he does venture into one-offs and limited runs of more extreme items. A particular highlight is a Tetsuo (from manga Akira)-inspired shirt, where one sleeve seems to be mutating before your very eyes.  Refreshingly, no matter where you look, you can feel the designer’s sincere admiration for the source material in every last stitch.

If that has piqued your interest, you can find the brand online—but a visit to the Nakano store is truly recommended. Not only does it give you a chance to see the brand in its real cultural context, but it’s also home to an ultra-rare original gacha machine from Cosmos, and a fully functional Street Fighter arcade machine, where I am currently 2-1 up on the designer. In essence, this is Nakano culture distilled in fashion form. And while an essential part of any subculture is hoping not too many people catch on, this is one brand for whom the big time is only a matter of time.

The Sound of Speed