To Catch a Thief

After two hours of being poked and prodded in the makeup chair, Johnny Depp appears on set.

The only other performer in the scene is Julianne Nicholson, who is known for playing prime characters on TV shows such as Boardwalk Empire and Masters of Sex. She opens the door of the suburban bedroom set and delivers a line about not feeling well enough to join the men downstairs. “Let’s see what you got,” Depp says, running his hand over her face to check for fever as she cowers. Next is a check for swollen glands, as his hand encircles her throat and tears well up in her eyes. He looks her up and down, shakes his head, and departs, leaving the woman utterly destroyed. 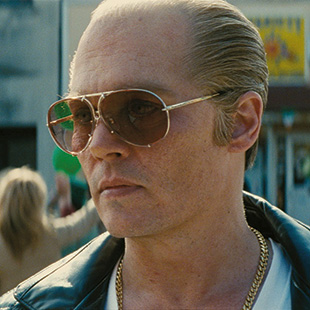 The film is Black Mass, the set is most assuredly a real location in Boston rather than a Hollywood soundstage, and Depp is James “Whitey” Bulger, whose ruthless rise in the Boston underworld landed him an honored spot on the FBI’s most-wanted list. In a story full of brutal violence, the bedroom encounter is one of the most devastating scenes, thanks to Depp’s icy performance.

Witnessing that transformation was “absolutely mesmerizing,” director Scott Cooper tells Metropolis by phone from his home in Los Angeles. “Both as a director and a fan of his work, it was amazing to watch. Johnny is so kind, sweet, and soulful, and what you see on the screen couldn’t be further from that. It was not only physical, but an emotional and psychological transition, the likes of which I have rarely seen.”

The director calls the brief bedroom scene “a masterclass of subtlety in acting, in psychological violence.”

Bulger’s criminal rise seems made for the movies. As one of his henchman says in the film, “in the beginning, Jim was a small time player … and the next thing you know, he was a goddamn kingpin. You know why? Because the FBI let it happen.” An investigation by Boston Globe reporters Dick Lehr and Gerard O’Neill found that not only was Bulger’s rampage across the city known to his politician brother, but was also being covered up by corrupt agents in the Bureau.

Despite the drama inherent in the true story, the project went through a development period nearly as complicated as the FBI’s efforts to nab Bulger. Depp left after a salary dispute and returned only after Cooper replaced Barry Levinson as director. Cooper explains that he was able to stick it out through the long process because “it is a very compelling narrative about a man who is the most powerful politician in the city of Boston, while his brother is the most notorious gangster, and then you throw in a childhood friend who is in the FBI. I said, ‘I just can’t pass this up,’ and I started to do a lot of research.”

The politician brother is played by Brit Benedict Cumberbatch, and the FBI agent role is filled by Aussie Joel Edgerton, both of whom do an admirable job of inhabiting the Boston accent. The rest of the stellar cast is rounded out by Kevin Bacon, Dakota Johnson, and Peter Sarsgaard. “It’s really an embarrassment of riches,” Cooper laughs.

It’s no surprise that he was able to assemble a roster of such fine performers. His first feature, Crazy Heart, netted Jeff Bridges the Oscar for Best Actor in 2010 and gained Cooper a reputation as “an actor’s director.” That’s not to say the director was after big names to put on the poster—he’s interested in the performances and the actor’s human qualities. In casting Dakota Johnson as Bulger’s common-law wife, he didn’t even consider the fact that her starring role in Fifty Shades of Grey would soon make her a household name, but was attracted by what he calls “a certain tenderness, which would bring some tenderness out of Bulger.”

Although Depp has lately been quoted as saying, “I don’t want one of those things,” his performance has generated a good deal of speculation that his turn will net him his first Oscar, following three nominations.

“Award season is always a mystery to me,” Cooper says, adding that “there are easier ways to make movies that might appeal to Oscar than seeing the world’s biggest star strangle an 18-year-old woman.” Depp also broke his own rule of not watching his completed films by sitting next to Cooper when the film premiered at the Venice Film Festival.

Another character in the film is its South Boston location, affectionately called “Southie,” which Cooper says plays a role as important as those played by Depp and Cumberbatch.

“I would never shoot a movie set in Boston in Toronto or Atlanta,” Cooper says of increasingly common practice of Hollywood productions going to where they can get tax breaks, regardless of what the story demands. Despite filming around the actual stomping grounds of Bulger and the Winter Hill Gang, some work still had to be done. “Boston is very gentrified now,” Cooper explains. “We had to recreate it.”

The period of the film, which spans the ’70s to mid-’80s, is another key element. Just don’t expect the disco gowns and huge sunglasses of recent period films like American Hustle. “I think too often it is done too showy, and it is a very difficult period to do,” Cooper explains. “My edict to all my department heads was, ‘Let’s approach this as if we were doing a contemporary film that just happens to be set in 1975.’ All of those details should recede to the background, and you have to have collaborators with no ego to do that, because they naturally want to show off their work. But otherwise, you overshadow character.”

However, the director does appreciate the power of the gangster figure in cinema. “People can escape the doldrums of their lives, and see the lives of these men, which were dangerous,” he says, pointing to the gangster films of the 1930s cranked out by Warner Bros., which is also distributing Black Mass. “During the Great Depression, they really stuck it to the government, and people could relate to that.”

Now 86, the real Whitey Bulger is safely behind bars. Would Cooper prefer that he had never been caught so he could leave his film open-ended?

“As the director of a film about him, I can say I’m happy I don’t have to look over my shoulder every day to see if Whitey is there,” the director says with a laugh.

Waiting for the Barbarians