Japan’s Real Castle in the Sky

“Do you see the jellyfish?” Mark said, pointing excitedly into the water. I mumbled an acknowledgement to my friend, afraid that if I opened my mouth, something other than words would come out. We’d been bopping up and down on a small boat for the last 15 minutes, and it appeared I’d left my sea legs back in Osaka.

We were headed for Okinoshima, one of four islands in a chain known as Tomogashima, off the coast of Wakayama Prefecture. The island, brimming with rare rock formations and an abundance of plant and animal life, is the first of 28 destinations for Buddhists ascetics on the Katsuragi Pilgrimage. 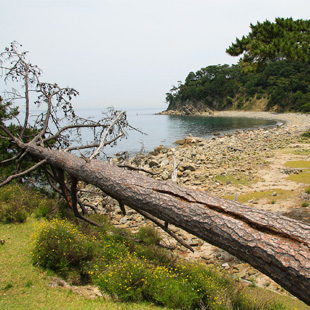 From the Meiji Period until the end of World War II, Okinoshima also served as an important military base for the Japanese Imperial Army in protecting the Osaka bay area. Today, its lush forests are reclaiming what’s left of the bunkers, ammunition chambers, and underground tunnels left behind.

The red-bricked ruins, slowly being swallowed by vegetation, have been likened by many to scenes of Laputa in Hayao Miyazaki’s 1986 film Castle in the Sky. This has turned Okinoshima into a popular destination for fans of the Studio Ghibli anime.

But the island is a treat for history buffs and nature enthusiasts too, with its hiking trails offering breathtaking views of the surrounding Seto Inland Sea.

Once we disembarked from the ferry, I got to take a closer peek at the jellyfish pulsing in the surrounding waters from the pier. The azure water was crystal-clear, unlike the weather that day. 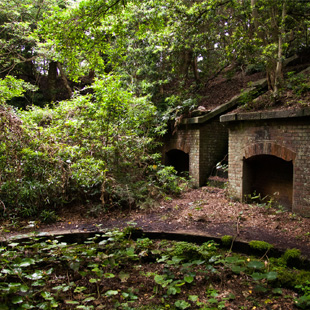 I made a beeline for a bench in the grassy area nearby, keen to tuck into our picnic. While there is a camping ground on the island, facilities are limited; and with just one restaurant and a couple of vending machines, it’s advised that visitors bring their own food and water.

Once we’d fuelled up, it was time to begin our hike. As we started up the first incline, the island’s few modern structures began to fall away and we soon reached the site of the Second Weapons Battery. The decaying fortress sits atop a hill overlooking the sea. It was bombed by the allies after the war, and has been left as is. “Restricted Area,” the sign reads. “These remains of an artillery battery continue to erode and therefore are very dangerous. Please don’t enter this area.” And so, of course, we did.

After a quick look around, we tried to ignore the rivers of sweat now flowing down our backs, and trudged on.

We came upon the island’s lighthouse next. Built in 1872, the lighthouse is Japan’s eighth oldest, and is still in operation today, helping local boats navigate the surrounding waters.

We took a break when we reached a small beach and tucked into more of our snacks, as we watched an elderly group of hikers scour the coast for crabs.

At the end of a long, winding trail, we discovered the Old Navy Listening Office. Built into the cliff side, it too looks like something out of a movie, with its windows facing out to sea and its giant skylights letting sun trickle in from the ceiling.

We were on our way to the Third Battery Site, the largest ruin on the island, when I felt Mark grab my arm. “Watch out!”

My feet were running in the opposite direction before I could register what I’d just seen: a Japanese pit viper. 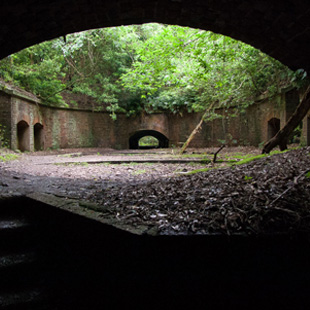 Mamushi, as it’s colloquially known, is second only to the Okinawan habu as Japan’s most dangerous snake. Its venomous bite puts around 3,000 people in the hospital every year, of which around 10 cases result in fatalities.

We watched, frozen, as it slid off the path and curled up, disappearing into the leaves.

Fear turned into excitement when we reached a set of tunnels that are the remains from one of the Yura Fortresses built by the Meiji Government to defend the Kitan Strait. This time, I grabbed Mark’s arm as he led us through the pitch darkness by the light of his iPhone.

And then we came to the ammunition chambers, the most famous of the island’s old buildings. They really do look like they something straight out of a movie.

After four hours of hiking, we still didn’t see everything, but for a ¥2,000 round-trip, it was a day well spent.

From Osaka, take the Nankai-Limited Express to Wakayamashi Station. Transfer to the Nankai-Kada Line to Kada Station. Kada Port is a 15-minute walk away.

Visitors can purchase ferry tickets at the ferry office in Kada Port. Be sure to make it back to the pier on Okinoshima in time for the last ferry.

For a timetable and further information, visit http://tomogashimakisen.com/jikoku.html.