Welcome to Tokyo’s most happening bar

Two Rooms is the most significant bar to open in Tokyo in recent memory. Run by a trio of expats with experience at the popular Oak Door Bar and New York Grill, this nightspot has taken just six months to establish itself as the hippest venue in town.

Tokyo could really use more bars like this, where the setting is dramatic, the drinks are strong, and the buzz palpable. Two Rooms’ open-air terrace, which looks out on the glittering Shinjuku skyline, calls to mind rooftop lounges in New York and LA. And not just because so many customers are speaking English—the natty design, courtesy of San Francisco’s Eight Inc., features candlelit tables, low-slung love seats and a shimmering infinity pool. Adding to the effect is the bar’s location in the stunning AO Building, a trapezoidal jewel that positively sparkles in the evening air. 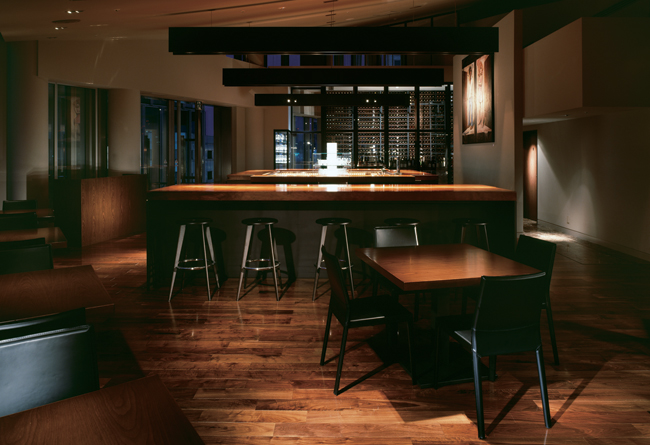 As its name suggests, Two Rooms is split into a pair of distinct venues. On one side is the restaurant, specializing in upscale chophouse fare courtesy of director Nathan Smith and chef Matthew Crabbe, formerly of the iconic New York Grill. The bar is run by Edward Baffoe, a Ghana native whose radiant smile will be familiar to anyone who’s ever sipped a martini at the Oak Door Bar in the Grand Hyatt Tokyo. Wondering where the moneyed expats who used to hang out there have gone? They’re here.

The two spaces, heavy on wood, glass and steel, have a stylish yet inviting feel. The square bar counter provides an excellent spot for watching the busy staff—as well as more sublime attractions. On a recent Saturday night, a procession of gorgeous Japanese women, ranging in age from their 20s to 50s, planted themselves at the bar singly and in pairs. A separate island counter and tables are situated opposite floor-to-ceiling windows; outside, standing counters handle the overflow crowd.

Two Rooms’ hefty drinks list feels more like a book than a menu. Bottles of wine, starting at ¥5,500, are housed in a glass-walled cellar that’s larger than some Tokyo apartments. The beer list isn’t nearly as deep, but it’s saved from obscurity by the presence of Samuel Adams lager (¥900).

The specialties of the house are classic cocktails (from ¥1,400) and their fresh-fruit variations—highlights from a recent visit included a kiwi martini (¥1,400) and passion fruit mojito (¥1,700). The food menu includes snacks like hummus, salads and wraps (from ¥600). Thanks to a lack of seating charges, our bill wasn’t as expensive as we feared—four drinks and a fat Punch cigar rang in at under ¥7,500.

Two Rooms certainly isn’t for everyone—if boisterous foreign bankers and the women who love them aren’t your idea of a companionable crowd, then try elsewhere. But if you’re looking to rub shoulders with Tokyo’s smart set while enjoying excellent drinks in elegant surrounds, you’ll definitely want to pay a visit.

Originally published on metropolis.co.jp on September 2009