Samurai swordplay for the masses

“It’s a samurai-dance music mashup,” Takafuji explains about his unconventional approach. “I first did this about five years ago; but we had calls to bring it back, so we’re working on a new show with DJs at [Shibuya club] Womb.” 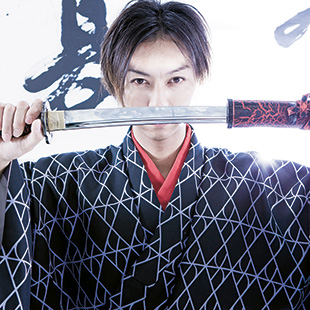 Efforts like his EDM Amaterasu, based on the story of the sun goddess from whom Japanese emperors are said to be descended, and Takafuji’s Tokyo Samurai Workshop, make traditional practitioners of kenjutsu (“sword method”) blanche. But Takafuji has devoted his entire life to the art of swordsmanship, and in a sense has as much a claim to it as sensei with nobler pedigrees in the craft.

“The area of Kanazawa where I grew up has a long tradition of kenjutsu,” the 37-year-old says. “But it’s the countryside, so the practice is different than in Tokyo. For our local matsuri [festivals], kids would go around and stage fights in front of people’s houses. It’s a kind of yakubarai [rite to ward off evil]. So kenjutsu is something I’ve been doing since childhood. I mix it with techniques I learned as an adult.”

Takafuji first got serious about a career in Japanese martial and performing arts when his mother founded a traditional Nihon buyō (Japanese dance) troupe, Takafuji Ryu (“Takafuji Style”). Takafuji’s mother performs geisha dances, while Ukon and his brother Sakon (the stage names play on the Japanese words for “right” and “left”) enact lion dance scenes from kabuki. The group has performed on stages from New York to Taipei.

A decade ago, Takafuji embarked on his own journey, moving to Tokyo and opening a studio in the Ikejiri Ohashi area, near Shibuya. He pioneered popular programs such the Katana Exercise, which has been featured on TV programs hosted by the likes of “Beat” Takeshi and Arashi.

Takafuji says he does indeed catch flak from traditionalists, but he takes it in stride.

“The criticism comes from people in well-established families of performing artists who’ve been doing certain styles for generations,” he notes. “But our audiences encourage us. We worry less about criticism than about not entertaining our fans.”

The savvy swordsman’s most recent creations target the international tourism boom sweeping Japan. Samurai Training Tokyo offers the chance to don a samurai outfit and have your photo taken before learning the basic routines.

My 10-year-old son and I give it a whirl, donning samurai hakama attire and being led through the paces of Japanese swordplay—something akin to what one might see in a samurai action flick—before being awarded a “Samurai Certificate.” My son takes immense pleasure in mercilessly killing me over and over.

Takafuji also offers a Katana Exercise program that’s popular with women. “The men are aiming to be pro, whereas the women seem to do it for fun,” he says. “Kenjutsu is originally a male tradition, so it’s new to them. They may have wanted to try it for a long time, but teachers wouldn’t teach them. We have women-only classes, so they can come and do it comfortably after work. It’s also a kind of stress release from the office.”

Participants receive instruction in the art of preparing the all-important ramen broth using Takafuji’s original tonkotsu (pork bone) recipe, cooking and shaking the noodles dry with flair, and of course slurping them down to top it off.

The best events for art, music and more this October