On the one hand: A quirky seaside factory town of sharply winding hilly streets and mechanical wonders. The clockwork goddess Marie soars overhead, maintaining a harmonious, utopian society with her ever-present song. Detailed drawings of automaton animals, ancient underground libraries and factories, and the rattling flying machine boarded by the heroine Pipi in order to make her beloved Kai fall for her. 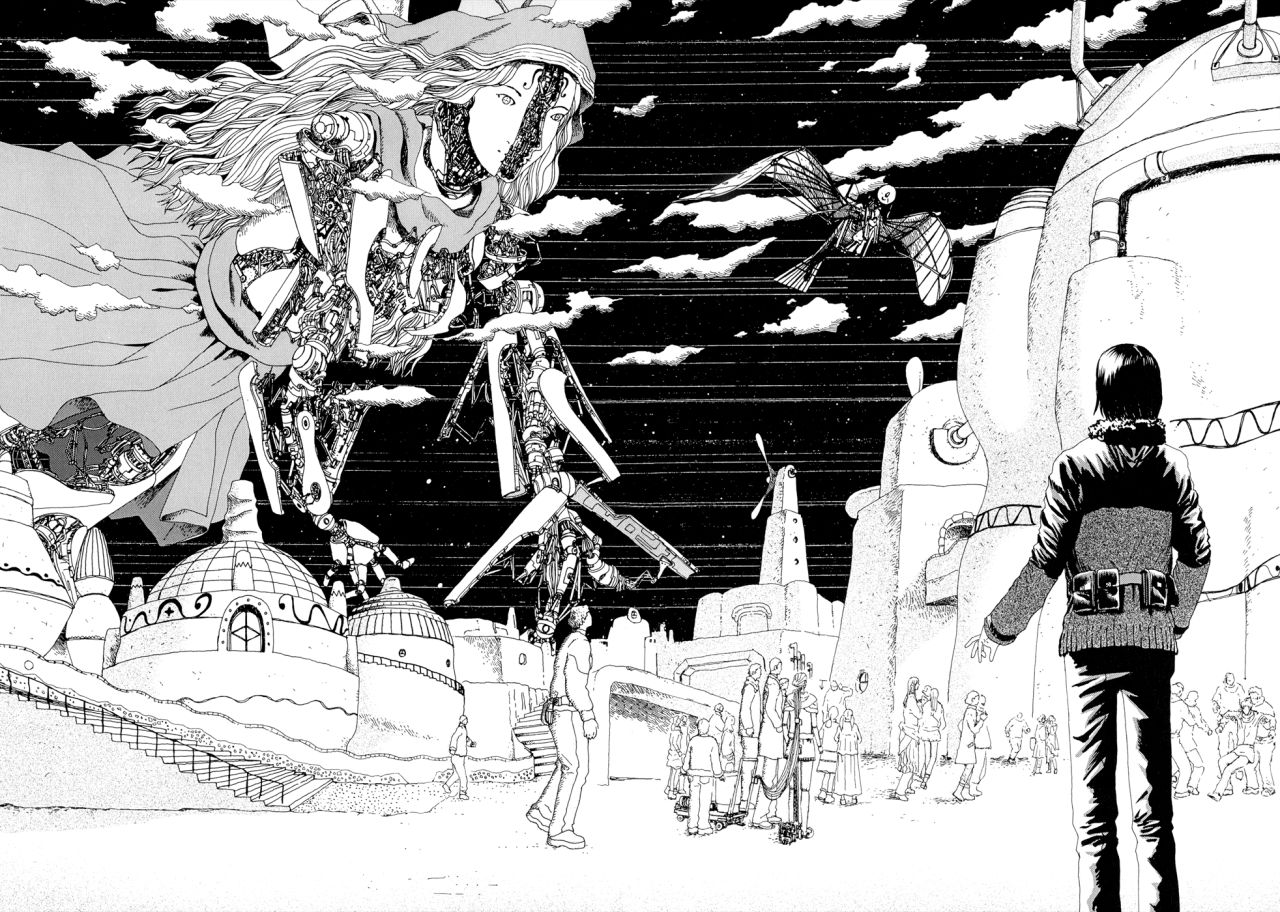 And on the other: Teenage malaise and world-weariness from the rooftop and a mysterious letter that claims to solve any problem. A secret underground lair where the “library committee” lays in wait, ready to solve any problem in hopes of creating another happy ending to add to their collection. The looming shadows that creep through an ordinary high school.

What these stories have in common is that they’re both timely releases from famed manga artist Usamaru Furuya—whose range is on full display in 2022. With the first-ever English release of his 2001 classic utopian steampunk tale The Music of Marie on May 17, and the recent release of his collaboration with J-Pop star Rina Ikoma, 図書委員界(The Library Committee), Furuya is back in the manga spotlight after years with barely any releases. 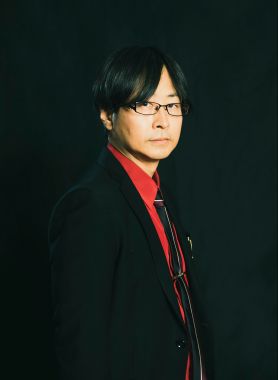 And it’s a good thing he is. Best known for manga including Lychee Light Club, Genkaku Picasso, and a manga adaptation of No Longer Human by Osamu Dazai, Furuya is famed for his artistic experimentation, strong ethical messages and unmatched ability to merge literature and art.

Furuya had an unusual path to manga, via his study of sculpture and abstract 3-dimensional figures in art school. He was even involved with Butoh dance, a Japanese theater performance that grew in 1960s Japan in a mission to “resist fixity.” After college, he worked as a high school art teacher until he made his manga debut in 1994. That debut was the ground-breaking four-panel “gag” strip Palepoli, serialized in the legendary avant-garde comics magazine Garo. Palepoli captured attention with its creative experimentation around the standard four-panel manga structure, resulting in an incredibly unique, dark work unlike almost any other. And yes—Palepoli was shockingly dark. The work’s one page vignettes mix the mundane, the fascinating, and the downright disturbing.

While later of his works gravitated towards a more traditional structure, he continued to cover controversial subject matter with a hard-hitting, gruesome presentation. This shows in some of his manga like the 2005 Lychee Light Club. This horror manga tells the story of a nine-member club of middle school boys who attempt to create an AI to abduct beautiful girls, with the group resorting to increasingly depraved methods to achieve their goal. Furuya shies away from nothing, relentlessly portraying and confronting misogyny, perversity and downright Nazism. 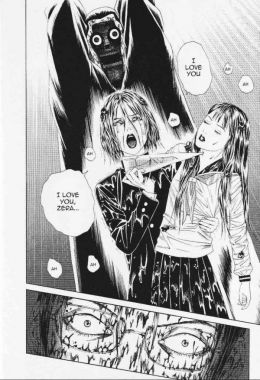 Furuya’s work is typically not for the fainthearted. But it nonetheless maintains a deep moral core. Even as his characters wander into darkness, readers can feel the ethical tug of Furuya’s writing and drawing, heaving towards what little light remains.

In this sense, The Music of Marie is a unique work by Furuya. It’s a utopian story, full of light, happiness, and wonder—but with a darkness lying underneath the surface. The Music of Marie upholds the brightest songs of the human spirit but reminds a reader of its darkest, most evil impulses. These are revealed to a reader through a soaring fable that will tug on even the most hardened heartstrings. Marie tells the tale of Pipi and Kai in the idyllic factory town of Pirito. Pipi struggles to confess her feelings for her long-time friend, while Kai grapples with a spiritual duty handed down from the goddess Marie on the verge of a cosmic revolution.

Marie is undoubtedly one of Furuya’s finest works. The story contains a loveable fantasy world, chock-full of delightful characters, and the story’s shocking plot twist is an almost-guaranteed tear-jerker. The leads Pipi and Kai are particularly captivating: The smiling, youthful Pipi taking care of the mechanical dolls in her garden, and the contemplative but compassionate Kai, with his deep love for the goddess of Marie, and uncanny ears that can seemingly pick up any sound.

Meanwhile, beneath an amply thrilling story are urgent ethical questions and messages about the nature of humankind. Does technology aid or corrupt humanity? And how can we restrain the demon, the little piece of evil, that lies dormant inside of all of us?

All of this, however, fails to mention one of the biggest reasons Furuya is so special: his art. Furuya’s iconic, beautiful drawings express his unique talent as well as an ability to emulate and devise unique riffs on existing styles. The Music of Marie simultaneously portrays Ghibli-Esque sweeping beauty, gritty steampunk smog and raw emotional shadow, sometimes all on the same page. Some of the panels are frankly mind-blowing, with Furuya showing off his ability to create minutely detailed steampunk universes. It’s a book worth delving into for the art alone. 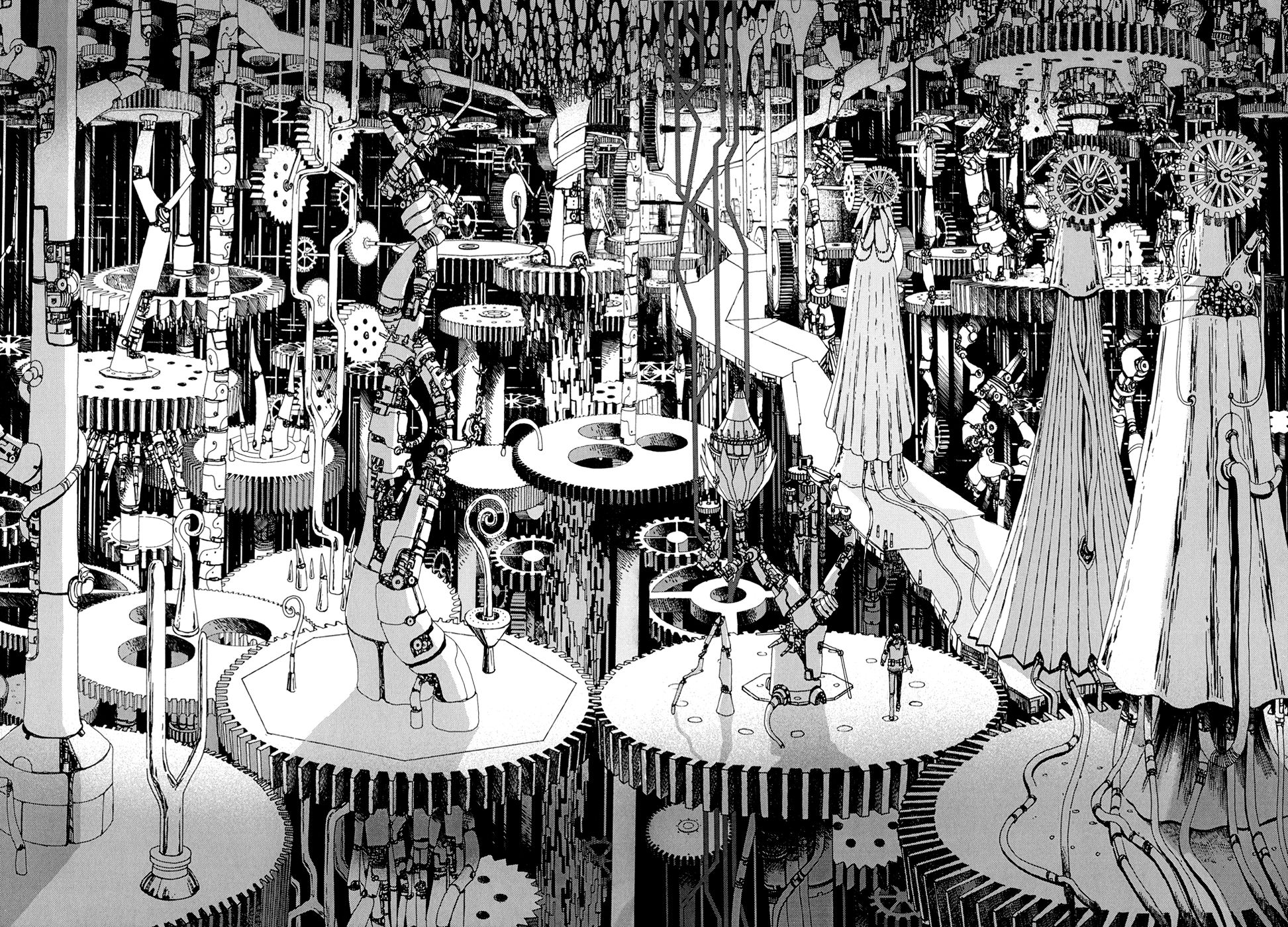 The Library Committee, which came out in March, features the same prowess in more restrained doses, as Furuya fills in the emotional gaps with artful light and shadow. This unique collaboration started on Ikoma’s YouTube channel, with Ikoma coming up with an idea and Furuya drawing a character based on it. Then, in a follow-up video, Ikoma dressed up to act as a character of Furuya’s invention. Ikoma, a former member of AKB48, turns out to be no storytelling slouch herself, with the manga pulling together two characters’ tales into an emotionally resonant conclusion.

Furuya coming to life in 2022 is a treat for art and literature lovers. For those capable of reading Japanese, that means checking out 図書委員界, and for English readers, getting your hands on a copy of the English edition of The Music of Marie, a single mega-volume with beautiful colored inserts. A great modern mangaka is singing once again.