How do you decide the best place to live in Japan’s capital?

The city of over nine million has lively and livable neighborhoods cropping up at nearly every one of its 800+ train or subway stations. While this challenging exercise starts with access to your own work and your personal values, and a lot of it boils down to personal appeal, we decided to use hard data to investigate the best places in Tokyo’s 23 wards to live for international residents.

For this exercise, existing Japanese livability rankings and surveys couldn’t do the job. While a livable neighborhood will be great for both Japanese and non-Japanese alike, the factors emphasized will be considerably different. For example, many existing Japanese-language rankings and studies put emphasis on factors like desirability and birth rate, which have little to do with actual livability for the average foreign Tokyoite. It’s clear that a new ranking is needed. 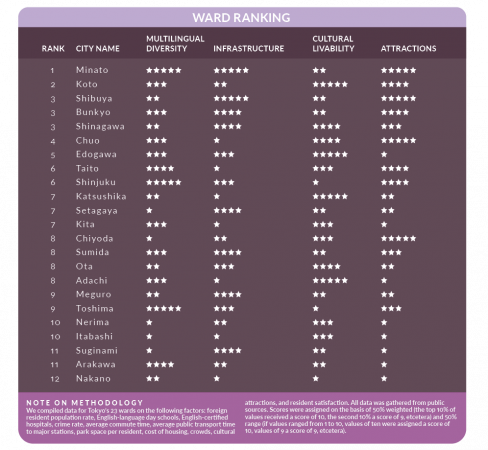 You can read more about the full methodology at the bottom of the infographic above, but a few heavily weighted factors include foreign population ratio, English-language infrastructure, transportation, housing costs, green space and cultural attractions. You can also use these rankings as a jumping-off point to see which wards score high in what matters most to you. 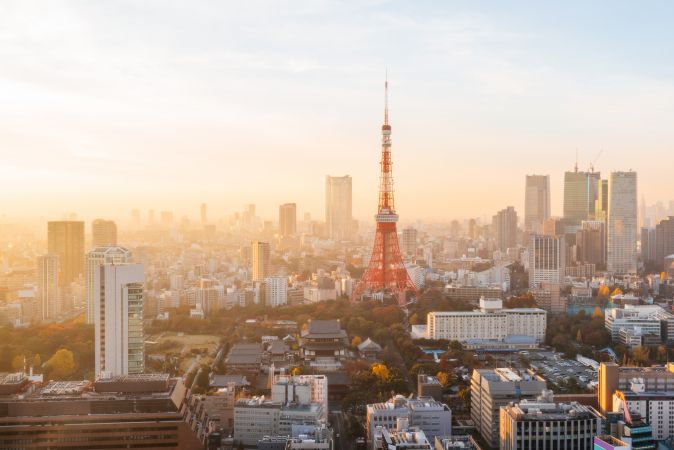 Perhaps it’s no surprise that the heart of Tokyo’s international community rises to #1 on this list. But the key thing to know about Minato is that its attractiveness to you truly depends on how highly you value international convenience and support. While its scores for diversity and English-language infrastructure were best in Tokyo (and best in Japan overall), it posted middling scores for safety and satisfaction, and poor scores for green space and cost of housing. Minato is also relatively less dense than Tokyo’s other wards. 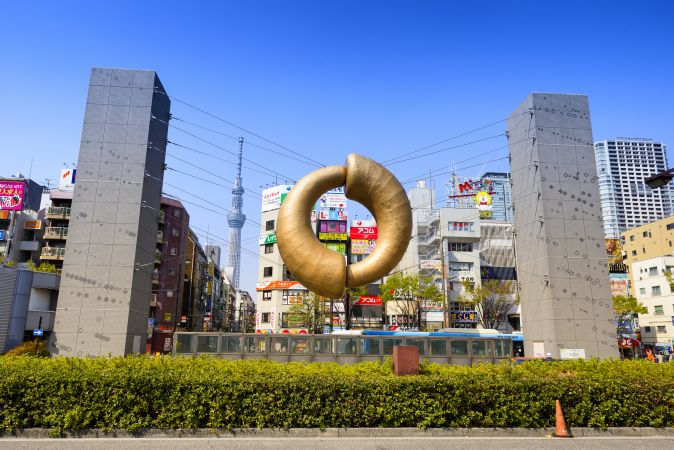 Koto is a surprising candidate to beat many of Tokyo’s most famous cities for the #2 spot. However, it rises to the top based on strengths across all categories. It boasts above-average scores for safety, transportation, crowds and green space, and has average scores for diversity, English-language infrastructure, cultural attractions and resident satisfaction. There’s no doubt that Koto ranks as an attractive, low-key place to live with immediate access to everything Tokyo has to offer. 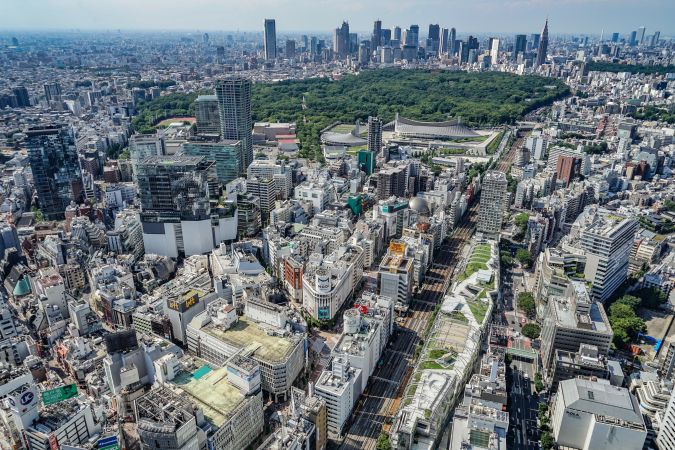 The glamor lives up to the hype. Arguably the most famous ward in Tokyo, it claims a spot quite high on the list. Of course, it’s impossible to beat the recreational and cultural attractions of Shibuya, but the ward also features the best English-language infrastructure in Tokyo, after Minato. 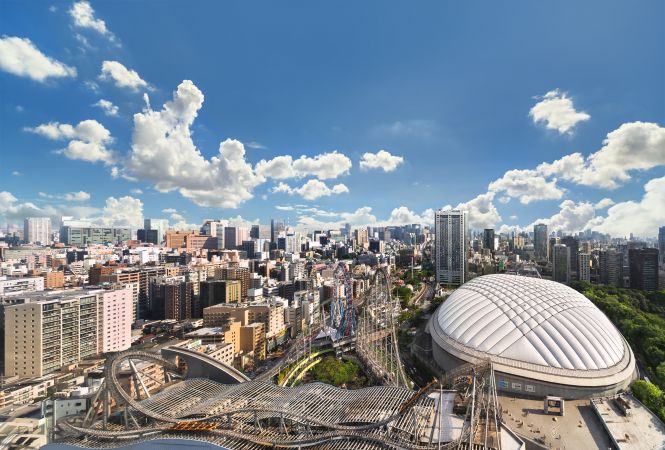 Bunkyo features one of the highest satisfaction scores: the area sports a central location within Tokyo and outstanding cultural amenities from Tokyo Dome City to countless major universities. Bunkyo scored in between Koto and Minato on expat-specific amenities like English-speaking schools and hospitals and has a lower cost of housing. Bunkyo is also the cream of the crop when it comes to safety in all of Japan.

Shinagawa is the last of the four ultra-high scoring cities on this list. Like Koto, it’s quite well-rounded: high transportation and safety scores, average diversity and English-support scores, and a slightly above-average green space score as well. The waterfront areas offer more luxury accommodation, compared to laid-back neighborhoods towards Meguro. Shinagawa is also cheaper than Minato or Koto. 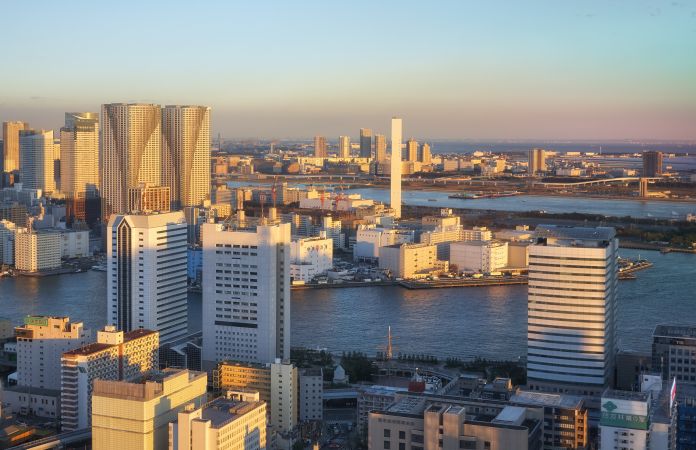 Tokyo’s cool skyscraper center also manages to place near the top. While it’s expected that the ward will post the top transportation rating in the capital, it scored surprisingly well on diversity, resident satisfaction and green space. Along with Shibuya, housing costs hover somewhere in between Minato and Koto. 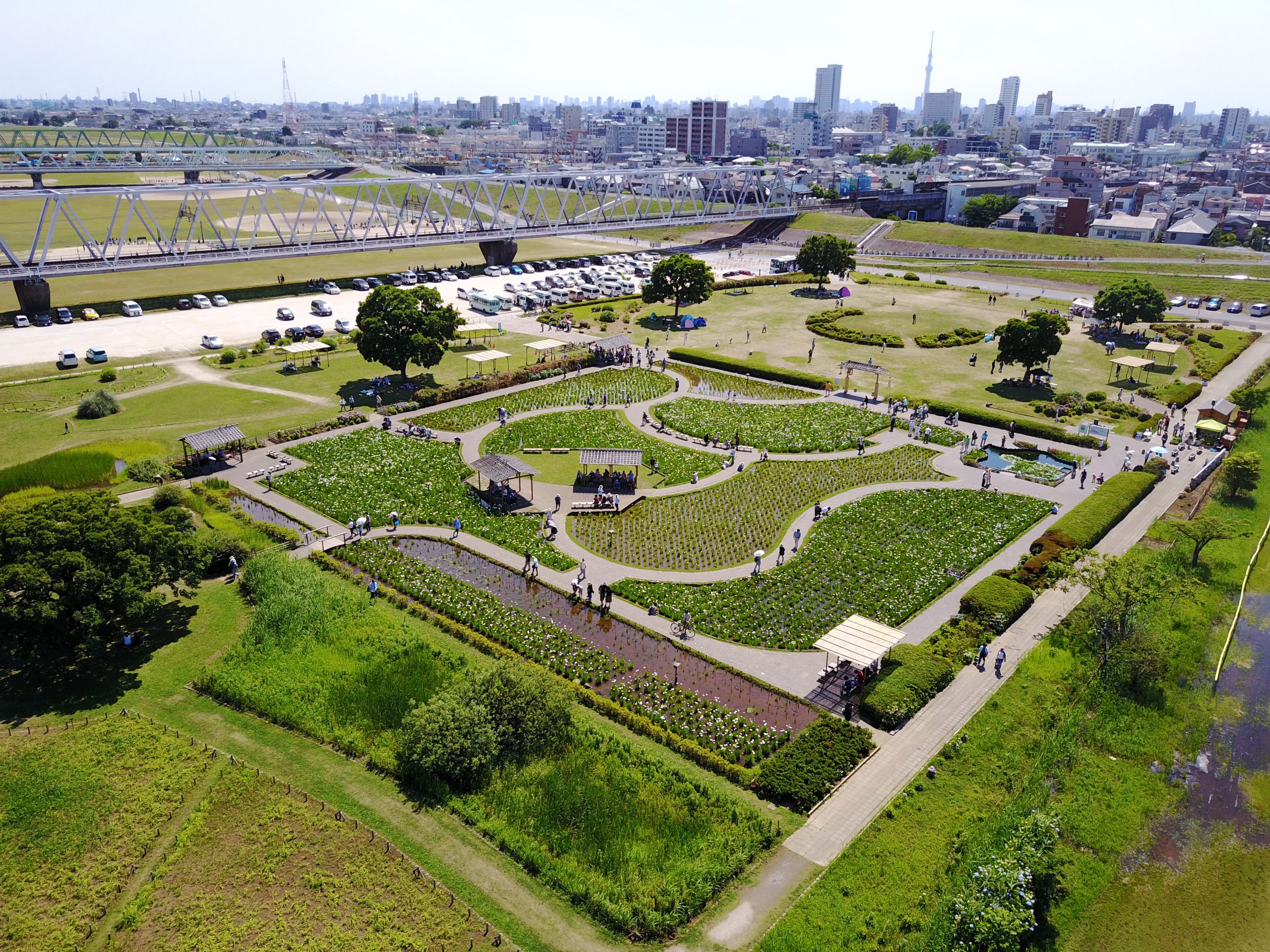 The first true dark horse on the list ties a spot with Chuo and Shibuya, largely on the backs of the most affordable housing in the capital. Edogawa also earned one of the best green space scores, with large parks along the Arakawa River. Edogawa’s reputation as a family-friendly, affordable place to live in Tokyo holds true for expats as well, with above average diversity and English-language infrastructure.

These are the cities that came in last on the list, based on the criteria:

Arakawa has average scores for diversity and English-language infrastructure, but relatively low housing costs struggle to make up for below-average scores in transportation, green space, crowds and cultural attractions.

Unlike Arakawa, Suginami was held back by its lack of expat- specific amenities. It didn’t excel in any particular area either, with below-average scores across the board. Of course, this won’t stop Koenji from being one of my personal favorite neighborhoods.

Coming in last place in this ranking is Nakano, stretching northwest from the far side of Shinjuku. Nakano just didn’t have much going for it in the criteria measured in this list, with a low transportation, green space and cultural attractions score and average housing costs and diversity.

Why is Nakano last? One stop on the Chuo Line east and you’ve got everything you need in Shinjuku. One stop west and there’s all the local vintage shops in Koenji. Despite being so close to Shinjuku, the residential areas are so peaceful, and our apartment’s rent isn’t high.

Most of the embassies are located in Minato-ku so there are lots of elite police stationed around our neighborhoods — great for safety. On the other hand, certain embassies attract the ire of the ‘Uyoku’ ultra-rightists in their notorious black buses. The resident tax is the highest in Japan but I feel that the public servants are more often accustomed to dealing with non-Japanese residents. The diversity factor is certainly a plus. But it’s a diversity that is skewed by the socioeconomic realities of Minato-ku. If you’re a Halloween fan, the kids’ costume parades and organized trick-or-treating around Hiroo and Roppongi are adorable. The international supermarkets are still an oasis for those pining for a taste of home.

Bunkyo-ku is a very easy place to live for all the points raised and more. As a resident of Kasuga, there are plenty of convenient train lines within easy walking distance. The local ward office is rarely too busy and has convenient facilities for English speakers. There are also a number of nearby supermarkets that have tasty options that are generally hard to find in Tokyo supermarkets. Housing in Bunkyo is also very affordable compared to other cities, it’s not too hard to find a bigger apartment for the same price as a tiny one in other places like Minato-ku.

One of the best parts of living in Shibuya-ku is the ease of getting around. Living in Sasazuka is less expensive than other options in Shibuya but still an easy walking or cycling distance to places like Shimokitazawa, Yoyogi Uehara and Naka Meguro and only a couple of minutes by train to Shinjuku Station. There are also plenty of western-style cafes and restaurants nearby and great options for hanami in the springtime.

Koto-ku should be number 1! Throw a rock and there is a good chance you will hit either a mall, grocery store, park or a combini. Due to its position, most roads run the cardinal directions, so it’s almost impossible to get lost — just look for Skytree and you know where north is. What I don’t like is that the Blue Bottle Tokyo flagship store attracts coffee lovers all over Tokyo, and now other coffee and boutique shops are following suit to leech customers from them. It’s good for my own business but it’s sad to be losing that local community feel for a more touristic vibe.

I live in Nishi Shinagawa which is very convenient for shopping. Nearby Togoshi Ginza is a popular shopping district because you can do tabearuki (eating and walking). Also, there’s a squash court in the city’s sporthall, where I can play for way less money than other private clubs. It has a locker room and nice showers, even a huge massage tub. It’s convenient for me to get to Haneda, it’s just one train and less than ¥500 to get to the airport, I can also take the limo bus from Osaki to Narita for ¥1,100.

There are a lot of rejuvenation projects happening, which is exciting. I can easily get to Asakusa, Ueno and Akihabara — even the Costco in Saitama. It’s a flat neighborhood, so exploring on foot and absorbing the local atmosphere is enjoyable.

Suginami is such a big area so it’s hard to judge it as a whole. Each little neighborhood within it has its own pros and cons.

How has living in Tokyo changed your personality?

We asked the international community in Tokyo

Redefining the standards for short city-stays and serviced apartments