A culture of support

Bodybuilding is a sport that deserves much more credit than people tend to give. The year-round rigorous training; the constant monitoring of the smallest details of your diet; the deceptively difficult technique to perfectly display your muscles. It is not a sport for those without dedication.

Naomi “Kyan” Mitsui, who recently competed in the Japan Bodybuilding Fitness Federation (JBFF) Grand Championships under the Bikini Fitness category, shares her firsthand experience of what it’s like to be a part of Japan’s bodybuilding world.

Muscle versus a leaner physique

The JBBF follows the same system as the international version that invented the sport. Despite generalizations, bodybuilding comes in several different forms. The standard category people typically think of is called “bodybuilding.” It exists for both men and women and, as you can imagine, is about getting as big and as lean as possible for the stage. For those wanting a slightly slimmer appearance, there is the “classic physique” category. Beyond that are the “bikini fitness” and “men’s physique” categories. These are much more focused on balanced physiques and competitors wear swimwear.

Mistui has been competing under Bikini Fitness since 2020, and to great success. The choice comes mainly from her background as a Pilates and aerobics instructor.

As an instructor, I want to express to clients with my actions that you can change your body and push your limits without being unhealthy

According to Mitsui, health and fitness take priority over appearing as lean as humanly possible. While being thin is often associated with being healthy, getting too thin can cause damage. Extreme leanness can make you feel slower, perform worse and create an imbalance in important hormones. However, the bikini categories put an emphasis on performance.

As is standard in the sporting world, there are both “on” and “off” seasons. In Japan, the seasons follow the contest schedule, with most major contests held in the fall and winter. A typical season starts around May and ends around September. Some contests run as late as November, but it’s all personal choice when you decide to stop.

While the time immediately following a contest is important to take off to recover from the damage done to your body in the fat-loss phase, the off season isn’t truly “off.” Athletes are encouraged to eat more during this time to put on as much muscle as possible. Training also gets more intense, weights get heavier and they push harder with each set.

The contest season itself is quite intense too. For all categories, athletes do their best to lose as much of the remaining body fat as possible. This requires what is often considered unhealthy levels of dieting. For women especially, this period can be incredibly taxing due to having a higher range of healthy fat percentage. 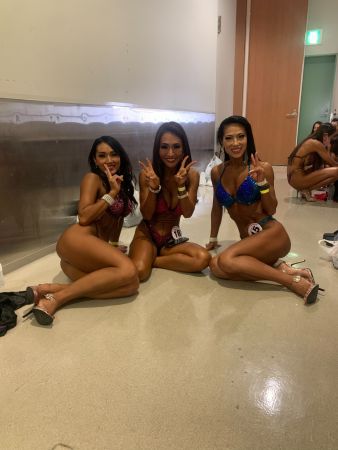 The contest season itself is divided into progressively more exclusive tournaments. It starts with prefectural opens. If you win, you qualify to move on to a regional — which is a combination of several neighboring prefectures. Do well enough there and you can join the All Japan, in which a good enough rank qualifies you to move on to the Grand Championships. Despite the raised stakes, the atmosphere is a far cry from what you would expect.

“Everyone in the grand championships gets along well,” Mistui says. “It’s more like a supportive friendship than a rivalry.”

Competitors bring omiyage (souvenirs) to share from their home prefectures, and take pictures with each other throughout the whole event. In better years, it is also not unheard of for the contestants to go sightseeing and out to dinner after things wrap up. In true Japanese fashion, everyone is thankful for being there.

When Mitsui entered her first competition, her goal was to just get on stage, but soon it became clear that she wanted more. Following the major success in her first year, Mitsui stays true to her roots as a fitness professional.

“You don’t have to enter contests like me,” Mitsui states. “Think of your own goal and go for it. It’s possible to reach your goals, whatever they are, if you work for it a little at a time.”

Fitness and fun, community and challenge

Tips on how to start an exercise routine

Getting into shape for the new year

From Heavy Smoker to Marathon Man