Cruising through Tokyo in style

It’s officially summer. In Japan, this means the inevitable rainy season, followed by months of pit stains and locals constantly remarking how hot it is. But another more welcoming custom of summer are the throngs of both men and women running around in yukata, the cotton version of kimono.

Though these are worn predominantly for special occasions like attending a fireworks display or visiting a temple or shrine, another chance to be immersed in a sea of these garments, while wearing your own, is … well, at sea.

During the summer, enjoy Tokyo via an evening booze cruise around the bay. There are many types of cruises out there, ranging from super luxurious to the bare minimum, but many people opt to celebrate the season in festive—and often drunken—fervor aboard either a traditional yakatabune, or with the Tokyo Bay Noryosen. 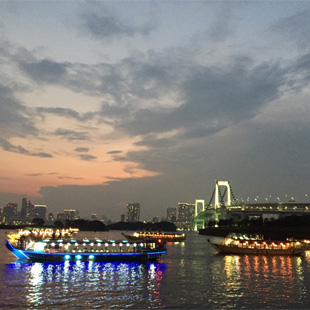 The first and more expensive option is the yakatabune, a traditional Japanese tour boat that seats around 70 people. Inside, low tables sit upon tatami matting, while an upper deck provides passengers with prime real estate to the sights along the Sumida River, including Tokyo Skytree. Perhaps you’ve seen these boats cruising slowly down the Sumida, decked with miyoshi (curved bows) and colorful red lanterns providing a night light for those to see from afar. It’s all very reminiscent of the Edo Era from which they stem. Back then, the boats were popular among the aristocrats who would lounge around inside, discussing politics with samurai.

Though it’s possible to ride a yakatabune year-round, summertime is the most popular season, based on the laid-back atmosphere, dress, and chance to see fireworks. (Reserve ahead of time for the big events.) Each cruise lasts for about two and a half hours—enough time to eat, drink, and have a merry time above and below deck. Dinner consists of a multi-course meal, usually with tempura and sashimi, and a free-flowing menu of both alcoholic and non-alcoholic beverages. Just make sure not to get too inebriated and fall off the boat as you gawk in wonder at the other colorful yakatabune parked around the Rainbow Bridge.

Prices vary based on the food or drink course you choose, but most are around ¥10,000 and some as low as ¥5,000. Some cruises are more foreigner-friendly than others, so just make sure to indicate your preference when you book. If you’re lucky, you may end up on a boat that doubles as a karaoke booth; prepare yourself for the drunken antics of salarymen truly letting loose.

The overall experience is very izakaya-like, with groups of people huddled together in a close area, who inevitably muster up the courage to get closer as the night carries on. We found the staff of our yakatabune cruise, Harumiya, quite accommodating, even though we were the only group of foreigners aboard. Special vegetarian requests and off-the-menu drinks were procured. Ice cream was even delivered straight to our window—from a floating Häagen-Dazs boat!

For a cheaper version of the above experience with the same beautiful scenery along the way, yukata-clad individuals may wish to partake in the Tokyo Bay Noryosen two-hour summer cruise around Tokyo Bay. Unlike the yakatabune, this cruise only runs between July and October, departing at 7:15pm every night from Takeshiba Passenger Terminal. At a steal of ¥2,600, the ship, which usually transports individuals to and from the Izu Islands, does a loop around the bay, turning around near Haneda Airport. If you show up in yukata, you’ll get a ¥1,000 discount on your ticket, but only during weekdays. 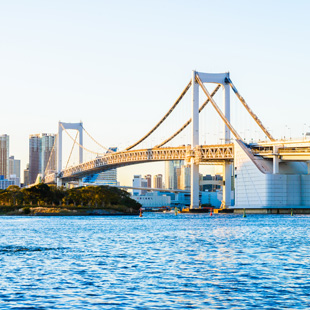 Your ticket gets you unlimited drinks in the form of cheap beer and refrigerated wine. Snacks are available for purchase, but most partygoers attempt to get their money’s worth in booze alone. The majority of the crowd spend their time dancing around the stage area where free “yukata dancers” provide rather tacky but still fun entertainment. Unlike the yakatabune, which tends to cater to an older crowd with a steady income, the Noryosen cruise sees more college students and those in their early 20s. Foreigners, in droves, attend this one too, as it’s a good chance to mingle, make new friends, and perhaps even try your hand at the international game of flirting.

Whatever your choice, your summer night is bound to memorable aboard an evening booze cruise. Gather some friends, learn how to tie an obi (belt) via YouTube, and come sail away in style.