Tokyo is known for restaurants specializing in one dish, such as sushi, yakitori or tonkatsu. An editor at a Japanese food magazine told me about a shop in Jimbocho that exclusively serves yakisoba. I almost rolled my eyes, but my informant has never led me astray. Yakisoba, a dish that is often found at festivals or at casual teppan-grill shops that serve okonomiyaki. At first, I couldn’t get my head around going to a restaurant for yakisoba. In our home, it’s a quick meal we whip together with whatever is in the refrigerator. But here are two restaurants in Tokyo that specialize in this casual dish of stir-fried noodles with pork or seafood and vegetables, that are worth your time and are true reflections of their neighborhood. 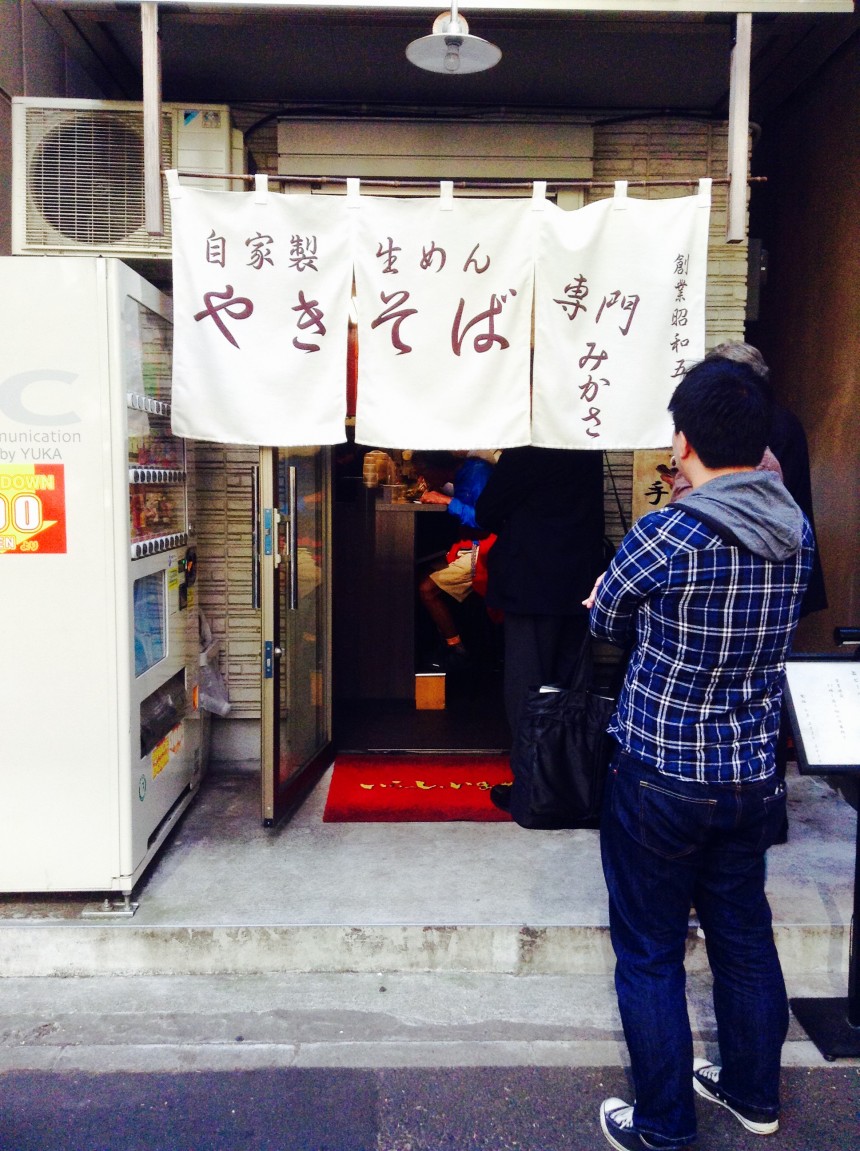 The Jimbocho Kanda area is home to many universities, so naturally there are plenty of cheap eats. Not just easy on the wallet, there are quality restaurants among the neighborhood’s low-price establishments, also referred to as B-kyuu gurume (B-grade gourmet). A white noren (traditional Japanese dividing curtain) with yakisoba spelled out in hiragana marks Mikasa, but more likely you’ll come across the queue of mostly solo diners, a mix of students and salarymen.

Purchase a ticket at the vending machine. Options are simple. Sauce or salt. Regular size (nami) and extra noodles (oomori) are both ¥800. There are optional toppings of squid, shrimp, extra pork (each ¥100) and an egg (¥50). It’s a sliver of a shop with barely enough room to slip behind the seated customers.

Noodles are made with Hokkaido wheat in the back of the shop, sauce is made in-house and each dish is made to order. The noodles are boiled before they’re fried and the finished product is a messy pile of noodles topped with a fried egg and presented on an oval silver plate. On the counter are self-service pots of benishoga (pickled red ginger), karashi mayo (Japanese mustard and mayonnaise) and ika tenkasu (squid tempura bits). The crunchy tempura pieces add umami and texture to the dish. The sauce version has a spicy kick. I much prefer the simpler salt version. The chewy thick noodles elevate this dish to a level worthy of a brick-and-mortar shop.

Across town is Shirokane’s decidedly more upscale Mutenka Yakisoba Bar Celona. There was a line in front of the shop before it opened. We were lucky to get in on the first seating. This line was mostly middle-aged couples who were not working on a weekday. There are high bar stools facing a teppan steel flat grill. This is not a quick meal, as care and attention is paid to every detail. 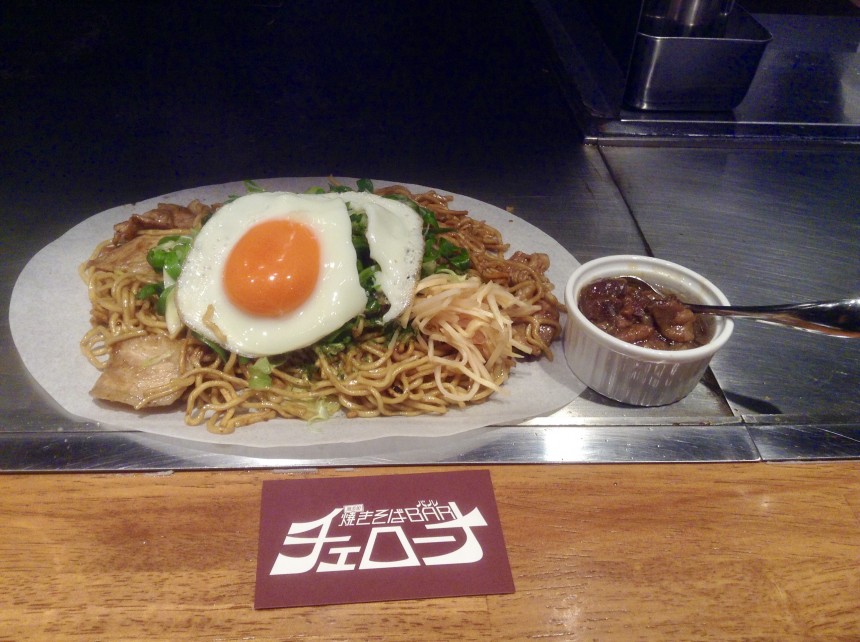 Everything is made from scratch here, from the noodles to the sauces and it’s all mutenka, additive-free. Optional toppings include deluxe items like yellow nira garlic chives, beef tendons, Kyoto Kujou leeks and additive-free sausages. On the counter is a small jar of spicy red karami sauce made with habanero peppers — a little goes a long way. The noodles are a blend of two domestic wheats.

The noodles are cooked on the teppan steel in front of the diner. This is a more overall sensory experience as you can smell, listen and watch the preparation. The noodles are not messed with once they’re put on the hot steel, but instead cooked until they start to brown and develop a crunch. Only then are they turned over and tossed lightly with a slightly sweet sauce that still adds that rich texture. The additional ingredients are placed on top. A white paper sheet is placed on the teppan in front of each customer and the yakisoba is presented on the sheet, keeping the dish hot. In the evening the space becomes a dining bar. Customers are expected to order several small dishes before finishing the meal with yakisoba. There is wine and other drinks on the beverage menu. Note that the shop will be moving to a new location in Gotanda this September.