A Pocketful of Sunshine

A paradise awaits on the island of Ishigaki

With summer fast approaching, your mind may already be on spending long, lazy days on the beach. Tokyoites have a few local options to choose from, but if your heart’s set on going further afield–maybe Singapore, Thailand or Taiwan–remember that you don’t have to exchange your yen for a taste of tropical paradise. Fly only a few hours south of Tokyo and you can find yourself in one of Japan’s hidden wonders: the Okinawan island of Ishigaki.

Being the furthest afield from mainland Japan, the remote Yaeyama Islands feel a world away from northern hotspots like Naha and Okinawa City. Leaving New Ishigaki Airport—a 3-hour flight from Tokyo and a mere 40 minutes from Taiwan—you’ll be struck by how close to nature you are, a feeling that will stay with you throughout your time on the island. No matter where you go, you’re never more than a short trip from lush wildlife or turquoise seas.

Several bus routes help users traverse the island on the cheap. If you plan on staying for a while, you may want to pick up a 5-day pass valid on all bus routes for only ¥2,000. While bus routes are limited, if you’re without a driver’s license (or would rather not spring for a rental vehicle) they’re a great way to get around the island. But depending on your route, the last bus comes well before midnight—sometimes at around 6 or 7 p.m.—so make sure to check the schedule of the line you’re planning to take. Once the buses have gone to bed, you’ll need to shell out for a taxi—but these carry a lower flat rate than Tokyo (¥390 per kilometer) and, depending on your distance, are fairly affordable. My drivers were also much more interested in making small talk than are drivers in bigger cities.

Whatever mode of transportation you choose, most routes lead to or from Ishigaki City. With a population of less than 50,000, it’s definitely on the small side, but with a good mix of things to do and see. Some favorite options include Vanilla Deli’s deliciously rich burgers and Banana Cafe’s floral cocktails with locally brewed Awamori. If you’re looking for something a little more, er, “international,” American fast food chain A&W makes an appearance.

If you eat meat, make sure to try a proper meal of island beef. While wagyu (premium Japanese beef) is famous throughout Japan, particular fans of Ishigaki’s output credit its lower melting point for giving its wagyu its tenderness and superior flavor. While many of these restaurants can be found in Ishigaki City, their offerings don’t come cheap. Nice cuts cost well past the ¥5,000 mark and continue into the stratosphere. If you’re able to foot the bill, its melt-in-your-mouth taste is said to be more than worth it. 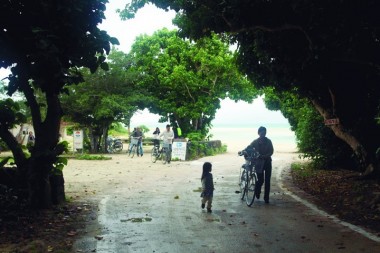 Much cheaper but still delicious are two of Ishigaki’s major culinary exports: the aforementioned sweet potatoes and dark Okinawan sugar cane. Both of these goodies show up in an endless variety of incarnations: cakes, jams, candies, and the like. It’s all delicious, reasonably priced and, for the most part, immaculately packaged. As a bonus, these souvenirs for the foodie on your list tend to be much cheaper than similarly-styled products elsewhere in Japan.

Despite being decidedly less busy than Okinawa Island, Ishigaki still has plenty of places for visitors to stay. Many are concentrated in Ishigaki City, the quasi-urban hub of the island, but a variety of private resorts are strung along the coast. These accommodations are single buildings or village-type estates, catering to a mix of budgets and featuring different amenities—such as the fantastically named Beach Hotel Sunshine’s private seaview onsen.

I spent a few days at Fusaki Village Resort, at the south end of Nagura Bay on the Island’s west side. As its name suggests, these accommodations are spread out to form a little town populated with semi-detached and private red-tiled villas, as well as newer apartment-like structures. There’re also a smattering of gift shops, bars and restaurants (featuring primarily Japanese food but with some more “Western” offerings). At the centre of the complex is a large hall serving buffet meals throughout the day, and its town hall-vibe makes breakfast feel more like a little community gathering than a private mealtime. Menus include a good selection of foods (with fresh fruit and vegetarian options), as well as the requisite Okinawan speciality: beniimo, or purple sweet potato.

Many hotels along the coast offer bicycle rentals at reasonable prices (at Fusaki they come at ¥1080/day), which allow you to explore the local environs while getting some exercise. Things can get pretty hilly heading inland, but even while sticking to the coastline you can tick plenty of great spots off your list: Tojinbaka, a Chinese-style tomb, and its nearby sugar cane shop; Nei Museum of Art, a small gallery with brightly-coloured island scenes hand-painted on silk; and Fuzaki Kannon Do Shrine, dedicated to the Shinto goddess of mercy.

From Fusaki Resort, I was also a short pedal away from Miru Miru Hompo, a recently expanded gelato shop and restaurant that offers sweet ice creams and milk jams, as well as basic lunch options like taco rice and beef bowls for around ¥500 each. Enjoy your snack on their patio for a great view of the coast

The best of Ishigaki is in the wild. While it’s possible to visit some of these spots by bus, your best bet is to rent a car. If you can navigate Japanese car rental websites (thanks, Google Translate!), you can easily find a 4-seat vehicle with gas for the day for less than ¥4,000. Otherwise, the English-friendly rental sites tend to charge a couple thousand more.

Zipping along the winding, picturesque roads of Ishigaki is a lot of fun, and in a single day you can see many of the sites that have made the island famous. High on your list should be Kabira Bay, a stunning beach inlet with scads of glass-bottom boats that bring you only inches from clown fish and blowfish in thick masses of coral. Priced at roughly ¥1,000, a typical tour lasts about 30 minutes and comes narrated in Japanese or English, if you’re lucky enough to have a bilingual driver. You’ll also get a free ticket to try Blue Seal ice cream, a famous Okinawan treat originally developed for American G.I.’s stationed in Okinawa Prefecture. 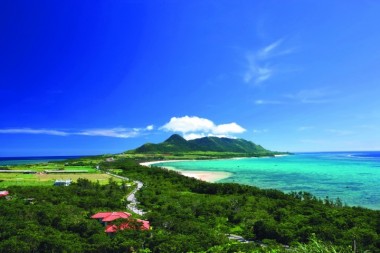 For a prime vantage point of the island, you’ll want to head up—but not too far. The highest mountain in Okinawa Prefecture is Mt. Omoto, but you’ll get the best view of Ishigaki from the slightly-shorter Mt. Nosoko. It’s a steep and off-road climb that will have you battling through dangling branches and your fair share of mud on rainy days, but it’s absolutely worth it. The views of the island are unparalleled and offer a whole new perspective of the island.

On the northeast corner of the island, Uganzaki Cape demands a visit not only for its lighthouse, but the breathtaking natural rock outcropping that extends beyond it. Those without a fear of heights should head out to the end of the peninsula, where they’ll find a tiny shrine and, after scaling the rock face beyond it, a breathtaking view of the coast. It’s stunning in any weather and one of the most memorable sights on the island.

While it might be tempting to give yourself a strict schedule to make sure you can fit everything in, make sure you leave time to improvise. On my visit, a friendly couple who had recently moved from the mainland recommended a hidden field with wild horses at play. Even though we weren’t able to track it down, we did find a hidden beach complete with shipwreck.

Ishigaki has more than enough on offer to keep you entertained for your whole vacation. But since you’re in the Yaeyama Islands, why not visit some of the neighbours? Nearby Taketomi Island is only 15 minutes by ferry (¥580 each way) and is a true time capsule of old homes (some of which are partly constructed using pieces of coral), sandy laneways, and wagons pulled by water buffalo. A free shuttle from its tiny ferry terminal connects you with cheap rental bikes that make exploring the island a breeze. You can see and do it all in an afternoon, including a lunch of Taketomi’s famous Yaeyama soba, some mountainous milk and brown sugar kakigori and exclusive petting privileges of the island’s many stray cats.

It takes longer and costs a bit more, but from Ishigaki you also have the option of heading to Iriomote Island: the second-largest island in all of Okinawa Prefecture and an ideal spot for kayaking, climbing waterfalls and exploring mangroves.

So the next time you’re looking to get a world away, don’t go too far. Ishigaki Island offers a culture that is distinctly Japanese but, like so many spots in Japan, uniquely distinct.