A rugged Japanese spirit far removed from the Tokyo psyche

Indeed, there is beauty in violence. Lists of the most beautiful places in the world are often full of places that are difficult or dangerous to live in. Tokyo espouses an elegant, sanitized kind of beauty. Mishima was an urbanite through and through but he certainly denounced the image of Japan as a “nation of flower arrangers,” and understood the longing for brutality and wildness. Perhaps he had been to Noto.

Noto Peninsula is located north of Kanazawa, jutting into the sea of Japan, jagged and fearless. It’s remote, fiercely rural, the climate wet and windy and the countryside rugged. Speaking in a sometimes incomprehensible Noto-ben dialect, the local people here live a deeply traditional lifestyle that couldn’t be farther removed from Japan’s major cities. Tokyoites merely looking to escape the summer heat are better off going to Karuizawa and instagramming their lunch in overpriced coffee shops. However, those looking to escape the summer heat whilst having a transformative cultural experience, could try travelling to Noto—if they can stomach the complete lack of public transport. 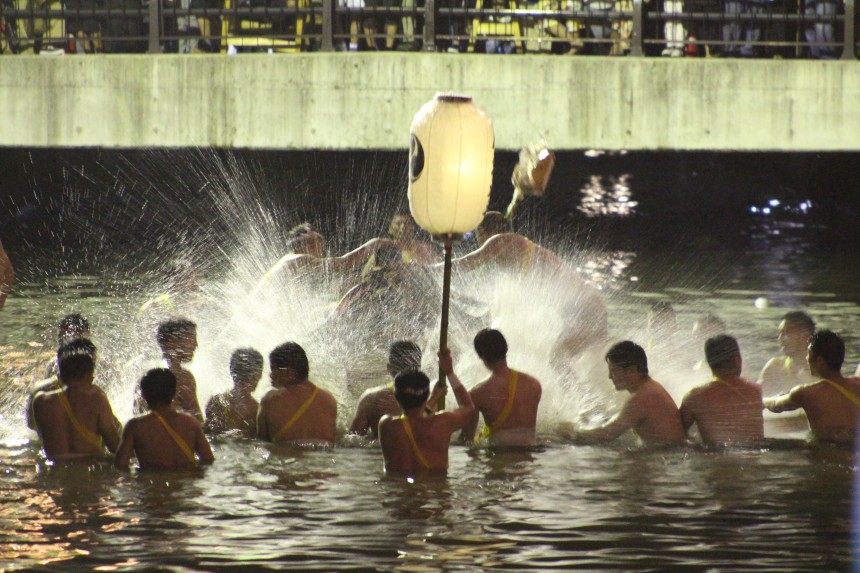 During the second night of the festival, portable shrines are carried around the town before being taken into the river and beaten up. Photo credit: Ashley Hirasuna

With skies that are darker than much of Japan, it seems fitting that many of Noto’s festivals pertain to light. Kiriko is the name for the style of giant lanterns emblematic of Noto that are the centerpiece of the many matsuri (festivals) that take place across the region during the summer months. There’s the Anamizu Hasebe Festival on July 20, Notojima Koda Fire Festival on the last day of the month, and many more. Most striking however, is the tiny town of Ushitsu’s Abare festival. Abare means to be riotous, cause havoc, or go on a bender. Whatever your chosen phrase, a festival dedicated to going mental flouts stereotypes of Japanese restraint.

In English, the Abare Matsuri is commonly known as the Fire and Violence festival and takes place on July 7 and 8 this year. ‘Fire’ and ‘Violence’ is quite a literal description of what occurs: the first night of the festival, giant kiriko are paraded around bonfires. With a good chance that you will get flaming ash in your hair, this part of the festival is dramatic enough, but it is the violence that comes the following night that is truly unforgettable. Portable mikoshi (shrines) are paraded around the town by nearly naked men, you hear a cry and then they… beat them up. And there really is no other word for it. They lift the mikoshi high, drop it on the floor, bash it against a wall, tip it over, stand on it, spray it with sake. When that’s not enough, they take the mikoshi into the river and beat them up some more, all whilst chanting and being pelted by flaming ash. The festival reaches its climax when the mikoshi arrives at the shrine; the priest inspects it to see if it has been destroyed sufficiently—if not, it will be thrown in and out of the bonfire until sufficient abare has been had. The experience is intense, fun, bizarre and, as someone who grew up with British Health and Safety culture, would be utterly impossible to write a risk assessment for.

For a quieter introduction to Noto’s kiriko festivals, head to the exquisite market town of Wajima, two hours by bus from Kanazawa. The dull modern building of the Wajima Kiriko Art Museum belies its contents: 30 full-size kiriko lanterns in all their color and splendor and a well laid out museum interior for your education and entertainment. 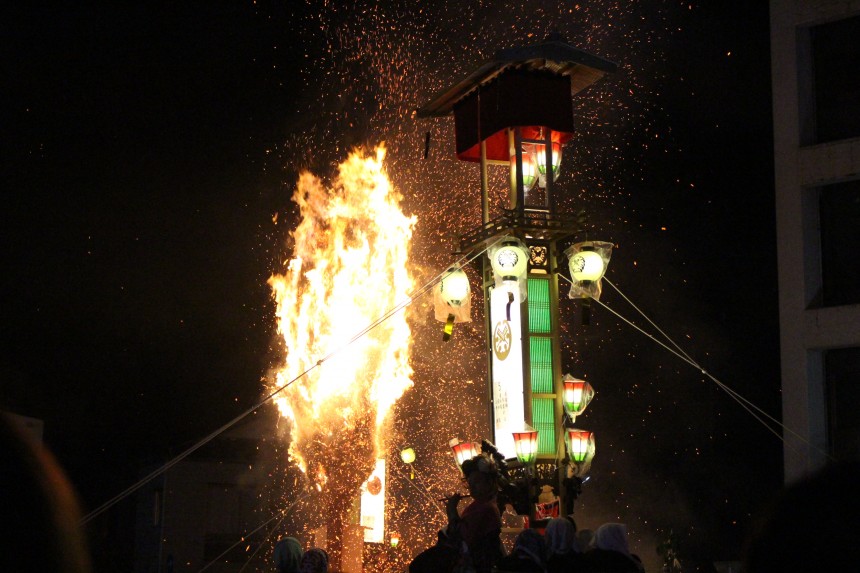 Crafts
Wajima is guardian of its own traditional craft—Wajima-nuri, or Wajima lacquerware. Master craftsmen and women in Wajima carry out this complicated craft entirely by hand, consisting of up to 124 sub-processes. Natural lacquer is mixed with jinoko, a powdered mineral, and applied to wooden tableware. The result is a beautiful, sophisticated product, uncompromising in utility and formidable in terms of craftsmanship.

To get your hands on Wajimanuri, head to Wajima’s street market in its charming cobbled town center, which is on almost every weekday from around 8am—though expect the lacquerware to burn a hole in your pocket. 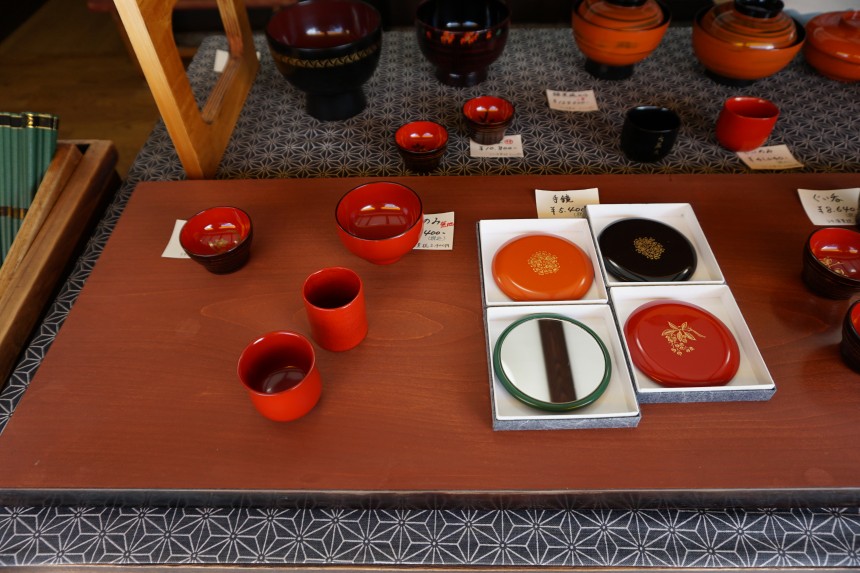 “Rice tourism” may not sound particularly exciting, but when you hear the almost reverential way Japanese people talk about their staple food, you can start to see why people travel from all over the country to see Noto’s famous terraced rice paddies, Shiroyone Senmaida. Historically, rice farming was an extremely arduous task, and community life was organized around it. Perhaps it was the six-month rice paddy farming cycle that first gave birth to the concept of wa (harmony and conformity within a social group) that is prevalent throughout Japanese culture. Many religious rituals are dedicated to rice and a trip to Noto’s rice paddies does somehow feel like a pilgrimage.

10km from Wajima town center, Shiroyone Senmaida (translated as “one thousand rice paddies in Shiroyone”) overlook the Sea of Japan. Rice is planted in mid-May but the view of the sea across the terraces and the contrast of color between the slope and the water is stunning all year round. As it’s not possible to get complicated machinery onto the slopes, all of the farming is done by the locals by hand, proudly and painstakingly. 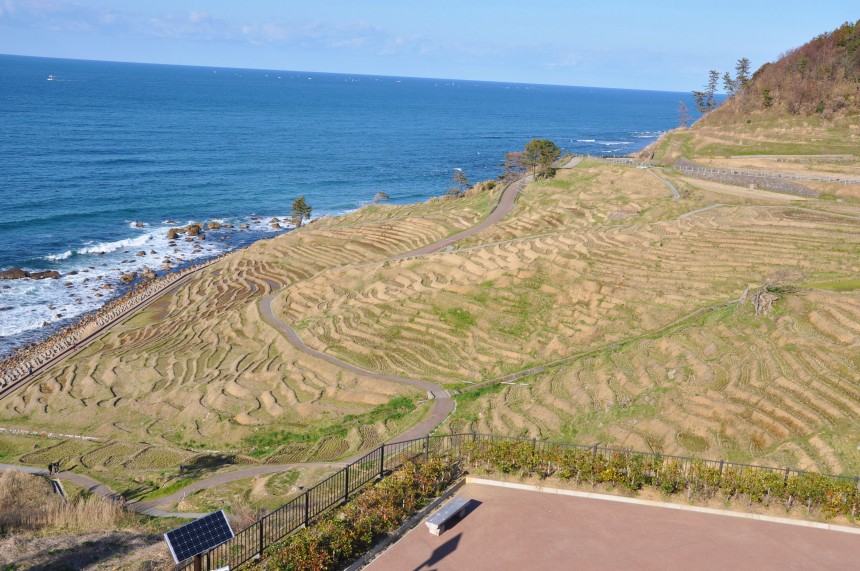 As immigrants, we carry “our Japan” with us in our heads. When we visit home and tell our friends what Japan is like, what we mean is what our microcosm is like—and for a disproportionate amount of us that’s urban, white-collar Tokyo. For me, Noto’s rugged landscapes, deep traditions and wild festivals opened up a Japan that was far removed from my crowded commutes and Tokyoite restraint.

To return to Mishima, the author discussed the dichotomy between elegance and brutality in one of his rare interviews in English, “Sometimes we are too sensitive about refinement, or elegance, or a sense of beauty, or the aesthetic side. Sometimes we get tired of it. Sometimes we need a sudden explosion to make us free from it.” Or, sometimes you just gotta let your hair down and abare.