An island overrun with cats may be your idea of either heaven or hell. If it happens to be your heaven, your dreams can be granted with a trip to Ainoshima. Literally nicknamed “Cat Heaven Island,” it’s located off the coast of Fukuoka. Though it’s just one of the many animal-themed islands in Japan, Ainoshima steals hearts with more than just its feline charm. 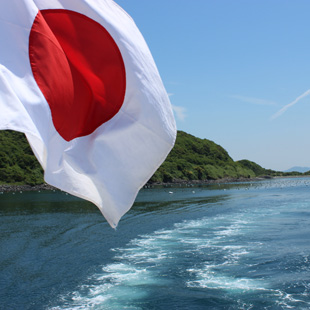 A convenient half-day’s trip from Fukuoka City, the island is one of the more accessible cat islands out there—yes, there are several—reached via a quick 20-minute ferry ride from Shingu Port. From April 1 to September 30, the island’s tourist season, the ferry runs six times a day, each way (¥460). Tickets are purchased at a vending machine located in the terminal waiting room. The ferry itself is surprisingly large and new, with ample deck space to enjoy the jaunt over to Ainoshima. And with the Japanese flag waving behind you in the sun, it soon becomes easy to forget the bustle of Fukuoka.

The island as a whole is relatively tiny, about 1.25 square-kilometers, and visitors can easily circumnavigate it within an hour or two. Though most of the action is around the port, other sites include a small shrine and stone tumuli dating back to the 5th century.

But of course, the biggest draw to Ainoshima is its hundreds of feral, free-roaming cats. Upon seeing the felines, it’s evident that they have survived a harsh island life. Local scientists studying the cats attribute their battered appearance to competing with other cats for food and mates. In West Side Story fashion, hierarchies among the cat families have been identified and fights occur quite regularly. As a result of this cat-eat-cat world on Ainoshima, most of the felines live just three to five years. 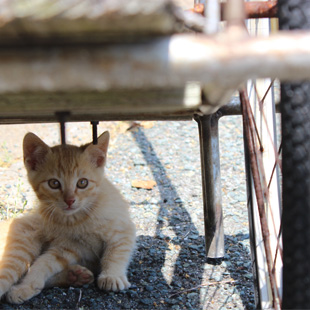 Unlike your perceived fantasy, the island cats don’t come running out to meet you upon arrival. In fact, when I landed, it was only after reaching the town proper that my first feline friend made an appearance … lazily, of course. From then on, the cats were found in clusters: under fishing equipment, in the shade of street corners, and on the steps of the center. Most of the cats were skittish, and very few wanted to be touched. Even so, I found success just taking a seat among a kitty family and letting their curiosity get the best of them. Perhaps the highlight was when I happened upon a lounging mother, whose five kittens emerged one by one from under a rusty boat. (Note that feeding that cats is unwelcome, and signs posted throughout the island remind tourists of this.)

Aside from its feline population, around 500 people call Ainoshima home, the majority of them fishermen. As I visited on a clear and sunny day, every fisherman had laid claim to a prime fishing spot from off the pier. Many of them threw chum into the water with each new cast of their rods, attracting giant hawks and cats alike. Though I had intended to walk the perimeter of the island, I found myself entranced by the everyday life of the locals, who were more than willing to show off their latest catch. 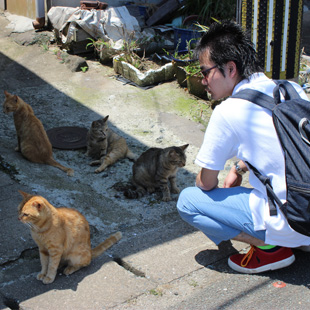 The port area continued to reveal photographic treasures. Buckets of shelled sea urchins and cages lay haphazardly next to the water’s edge. The rusty red remains of fishing carts picturesquely contrasted with the green algae growing over their tracks. Seaweed traps dotted the horizon and a few boats weaved through. Several abandoned cars and trucks lined the main road, basking in the sun with their windows busted out, hosting gardens of weeds and miscellaneous pieces of furniture. Ainoshima is in its own special world, tranquil and yet teeming with life.

With 15 minutes left until my scheduled departure, I barely had time to gobble down the fresh seafood lunch offered at seemingly the only restaurant on the island.

On returning to the mainland, I reflected on the pure magic of small Japanese islands; the cats only enhanced the warm fuzzies. Whether or not you’re a self-proclaimed cat person, Ainoshima still seduces visitors with its island charm and fluffy kittens, pawing into the coldest of hearts.