Dream-pop songs from the Tokyo-based trio

Post-punk outfit Tawings’ debut album is, according to the Tokyo-based trio, “a statement of what we want to do with the band.”

The album starts off with the smooth and mid-tempo, “Statice.” “We needed a proper opening song for the album and thought Statice’s demo, which we made about two years ago, could be the one,” Tawings’ lead singer Cony Plankton says. “This was recorded in Karuizawa, Nagano when I went there with my friend’s band. The atmosphere of this song matches up with Karuizawa’s peacefulness,” Plankton continues. Indeed, Plankton’s drawn-out vocals on “Statice” are reminiscent of the resort town’s easygoing vibe.

“It didn’t take long for me to write ‘Poodles,’” Plankton says about the album’s star track. Apparently, the song was inspired by the excitement Plankton felt as she waited for an adopted poodle from the dog shelter to join her family. “We worked a lot on this song, intending it to be very pop. Arranging it was the hardest part. We tried playing it on the sitar for the first time. We’ve performed it live a few times already and the reaction from the audience has been good, which was a great surprise,” Plankton says.

While heavily influenced by UK culture, the Japanese pop group also looks closer to home when composing its sound. “We always wanted to make a song that sounds like one of our favorite Japanese bands, Burgh,” Plankton says. “We met each other through Burgh and the band has influenced us a lot. We are also happy to work with Ryo Matsuyama from Klan Aileen on the song [‘Hamburg’].” 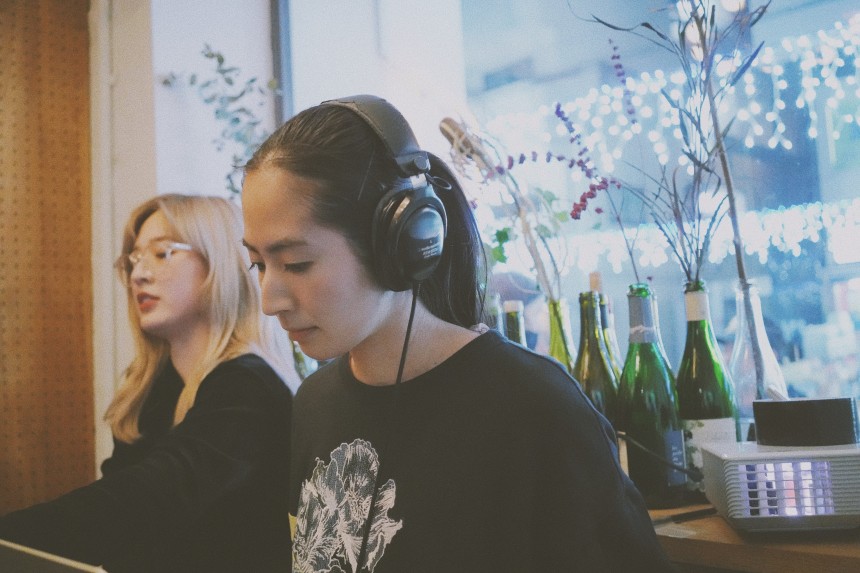 Tawings introduced their new album to a crowd at NEWPORT in Shibuya on Dec. 23.

Another lead track, “Suisen,” shows a different side of Tawings, one that is perhaps more vulnerable than its edgier, pop counterparts. Plankton wrote the song after the death of her grandmother. “This song came out of our experience as a band throughout the past three years and shows where we all want to go as Tawings. Our bassist, eliy, edited the music video. We really liked how all three of us committed to this song,” Plankton says.

In Tawings’ anticipated debut album, the band delivers eight tracks spanning the members’ musical roots and journey from post-punk to dream-pop. The trio will be hosting its first album release party on Feb. 14 at WWW in Shibuya, joined by Cibo Matto’s Miho Hatori. Plankton, along with bandmates eliy and Yurika, opens up about major influences and plans for 2020.

Metropolis: So the debut album was finally released. How do you feel right now?

Plankton: It feels great to see our physical CDs selling at many CD shops, even outside of Tokyo, and it is such an honor that people are actually buying our album. Also, The Horrors messaged me one day saying that they liked our songs. I am a huge fan of The Horrors so I couldn’t be happier.

M: Could you tell us a bit about your musical roots?

Plakton: Like I said, I love The Horrors a lot. I always look up to how they remix. Queen is another favorite band of mine. The Miracle and Queen Ⅱ are albums that I come back to listen to every once in a while.

Yurika: Swedish hardcore band Refused was my favorite band when I was a teenager. The Shape of Punk to Come, the last album they released before their breakup, is such a great album. Recently, I saw Taiwan’s Sunset Rollercoaster and American funk band Khruangbin last year and I love them a lot.

eliy: The Japanese 90s band JUDY AND MARY was my first exposure to band music. They stood out to me among the other popular genres of music at that time. Then I found out about David Bowie, XTC and T-REX as I was digging their musical roots.

Cony: A lot happened to us last year and it was great. The second half of the year was very busy as we recorded the album. We met a lot of artists, like AAAMYYY, which motivated us to create more pop songs.

eliy: We, the three of us, went to see OGRE YOU ASSHOLE live last year and it was so good. As for the band, I tried new things like video editing or working on artwork, which I’ve been interested in all this time. I really enjoyed it a lot.

Yurika: Although the album we released wraps up the past three years, it also feels like a whole new start. We are very excited to see what 2020 brings to us and so happy to play our new album with MIHO HATORI (ex Cibo Matto) this February.