My husband, my son and I are in a fast food store in Tokushima on the island of Shikoku, about to embark on a pilgrimage to the eighty-eight Buddhist temples which ring the island. This pilgrimage usually takes six to eight weeks to walk. As we only have three weeks we plan to cycle. That should be plenty of time, we think.

The pilgrimage is my idea. I have been obsessed with it for many years. I have, in fact, written a whole novel about a woman who wants to do this pilgrimage. It is counter-intuitive to do it now, when I have already written the book, but I like to mix things up.

“I will not complain if things do not go well while on the pilgrimage, but consider such experiences to be part of the ascetic training,” states the oath in our guidebook. As our plan is to ride 1200 kilometres on bikes designed for short urban commutes, this seems ominous. 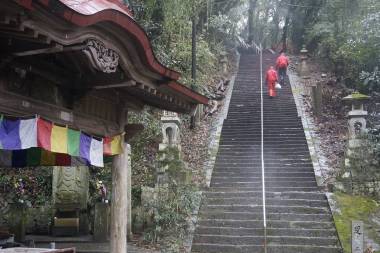 The commandments in the guidebook are more specific: “”I will not harm life, steal, commit adultery, lie, exaggerate, speak abusively, cause discord, be greedy, hateful or lose sight of the Truth.” While we finish our hamburgers we debate whether this means we can’t eat meat. We decide that it probably does.

After a couple of false leads, we find the bike hire down in the basement outside the train station. The staff, two friendly gentlemen, seem surprised that we want the bikes for three weeks. We hand over a bond of thirty dollars per bike and set forth with no other identification needed. Only in Japan.

At the first temple I persuade my family that we all need to buy a hakui, or white vest. This identifies us as pilgrims. The writing on the back asks Kobo Daishi, the revered founder of the pilgrimage, to keep us safe. At any rate, it will be good for visibility on the roads. 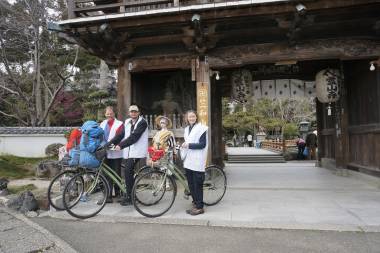 I also buy a tote bag, paper prayer slips to give to people who help us and a brocade-covered book to be stamped at each temple. There is a range of other paraphernalia which we decline.

Our guidebook says that Tokushima area, our starting point, is the place of spiritual awakening. As we cycle around the island we will pass through the place of ascetic training, the place of enlightenment and, finally, the place of nirvana. That’s something to look forward to.

The procedure for temple visits is outlined in our guidebook and, if done correctly, would take quite some time. We distill it to a ten minute version which includes bowing, hand-washing, bell ringing and book stamping.

Despite our efficient temple visits, by the end of day one we are already behind schedule. We’ve fiddled around with our backpacks—on back or in basket?—dealt with a flat tire and experimented with GPS navigation and riding attire. The walking pilgrims smile and wave at us as we go by. And then again as they pass us again shortly after. I sense we are becoming a running joke. 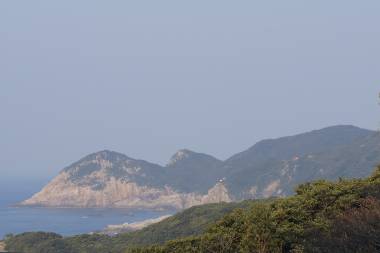 We had intended to spend the night in the bell tower of temple six, but shortly after temple five it is getting dark and beginning to rain. We find a little henro (pilgrim) hut beside the road and call it a day. The host of the shelter, an old man, drops by and soon returns with two more tatami mats for sleeping. He mimes a squatting action and points at his house to indicate we can use the toilet. We buy pork curry at the convenience store down the road and skulk out, hoping no-one will notice what bad pilgrims we are. The rain patters on the roof and we curl up on the tatami mats in our sleeping bags. Extraordinarily, this pilgrimage is unfolding just as I’d imagined.

The next day brings the start of the osettai—traditional gifts to pilgrims. When I buy some mandarins, an old lady throws in some dried sweet potato. I give her one of my prayer slips and she looks chuffed beyond belief. Throughout the journey we are showered with lollies, hot drinks and fruit. I feel like the whole island is cheering us on.

On the third day we tackle temple twelve, the “pilgrim crusher,” named for its location on top of a mountain. We push up a 400 metre pass, then on the long ride down I get a flat tyre and we retire to the nearest village for repairs. Some lovely ladies insist on giving us lunch as osettai and we even manage some conversation. When we eventually make it to temple twelve there is snow on the ground.

After a week we hit Kochi Prefecture, the place of ascetic training, and finally leave the walking pilgrims behind. We stay in henro huts plastered with prayer slips, in free rooms in temples and in our tent. We aim to find campsites with hot baths, a convenience store and a toilet.

We camp next to a ropeway station, on a rocky point with crashing waves, beside a lively frog pond and in a patch of wasteland with a large boat as a wind shelter. After an eighty kilometre ride down the last wild river in Japan, we find a campsite in the dark and set up to a rising orange moon. We sleep in a temple garage and watch sunset bathe the bell tower in a soft golden light. 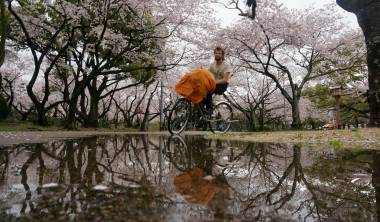 I learn that singing keeps your spirits up when you’re on a narrow ramp in a dark tunnel and that the less you have, the easier it gets.  I also learn that large grapefruit will always be received as presents before climbing hills. I think I am becoming a pilgrim.

At temple forty, the furthest point from temple one, we run out of time. Hiring a large car, we dismantle our bikes and slot them inside. We return the car at Takamatsu, one day’s ride from Tokushima. Even though we have not reached nirvana, or even enlightenment, I think we have passed our ascetic training with flying colours.

We ride into Tokushima to find that the long-heralded cherry blossom season has at last arrived. Every time the wind blows, petals fall like snow. We wheel our bikes back down into the basement and the rental man seems pleased to see us. After some confusion where we pass money back and forth between us, we establish that there is no more to pay. The deposit was enough. Our bicycle hire had cost us less than five dollars a day.