The dawn of the cute rebellion

Kawaii is the dominant cultural force in Tokyo fashion right now, and shows no sign of abating. In the past, the party-bound gyaru or even the funeral-bound goths might have kept some parallel conversations going on the sub-cultural level, but now even on the outskirts, kawaii sets the pace. 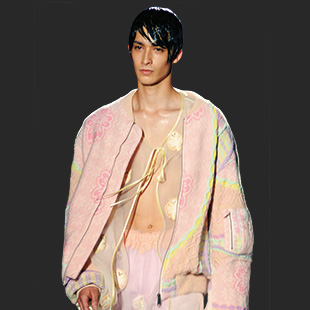 However, that doesn’t mean kawaii is not without its depths. Ever since 6%Dokidoki creative director Sebastian Masuda proclaimed “kawaii is the new punk,” it’s become an avenue for subversion in Japanese fashion, reliant not on the garments but their context. After all, there’s nothing inherently transgressive about, say, a Lolita party dress. Rather, that an adult woman is wearing it marks it out as an act of rebellion against societal expectations that stipulate a women must grow up to be a “good wife” and “wise mother.”

Set against the spikes and scum of punk—a rebellion in and of themselves, until their whole-hearted gentrification by the fashion establishment—kawaii presents itself as an ironically more mature and cerebral middle-finger to society at large. At first a societally acceptable avenue for younger people and a state celebrated by the male gaze, it can become a tool for rebellion when taken out of those contexts and opted into with agency, wielding a power that mustn’t be underestimated.

This kawaii rebellion has now spread to men’s fashion, with designers such as Mikio Sakabe having realized the counterculture implications of a kawaii man; and with tastes in menswear veering away from the conventionally masculine, this might just be the frontier to watch out for.

Internationally, kawaii still carries its message of rebellion—but this can vary from region to region. Lolita fashion has long been celebrated in the U.S. market as a symbol of subversion, a short-hand for a more conservative or modest view of womanhood against the tide of highly sexualized bodies that occupy the mainstream pop-culture zeitgeist Stateside.