There was a noticeable buzz around Roppongi Hills at the beginning of this week. Harrison Ford was in town to promote the critically-acclaimed Blade Runner 2049.

Ford, 75, said, “I’m very proud of [the movie] and I was glad to be involved.” He continued, “Japan has been a very special audience since the original Blade Runner and we hope that fans of the first film will enjoy this film as well.” 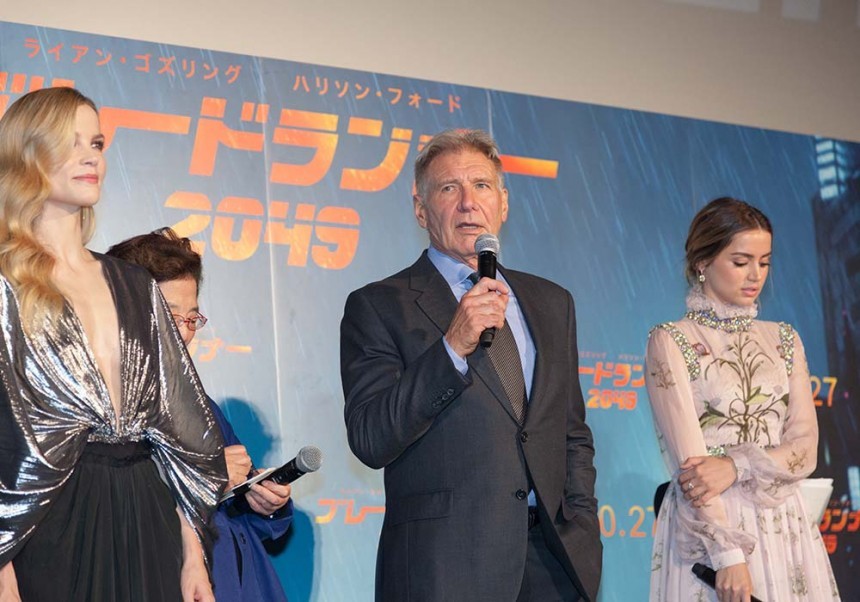 When asked how he got involved in this project, Ford began on the following story:

“I got a telephone call from Ridley Scott, who rarely calls, and he wondered if I was interested in revisiting the character of Deckard. I said …I don’t know. Do you have a script? Do you have a story? He said we don’t have a script yet but we do have an exercise, a novella [Scott] created with one of the original writers, Hampton Francher. I read that and I was very impressed by how they had created a new story…I was interested in the situation that the character I played [Deckard] found himself in. And his relationship with the character Ryan Gosling plays was a very emotional and satisfying one. So when Denis [Villeneuve] accepted the assignment to be our director and brought all the very talented people along with him, I was very excited about the opportunity.”

Villeneuve added, “It was very important for me to keep several elements of Japanese culture in the movie that were so important in the first film. [You can see] a Japanese influence in the design of the technology, and in some clothing and architecture. And you’ll see some of this in the advertisements and signs on buildings.”

Co-star Ryan Gosling was not in Tokyo for the premiere, giving Villeneuve a chance for this little gibe: “I would add that the first thing Ryan Gosling asked me when we started the movie was ‘have you ever been to Shinjuku?’…Of course! I’ve been several times!”